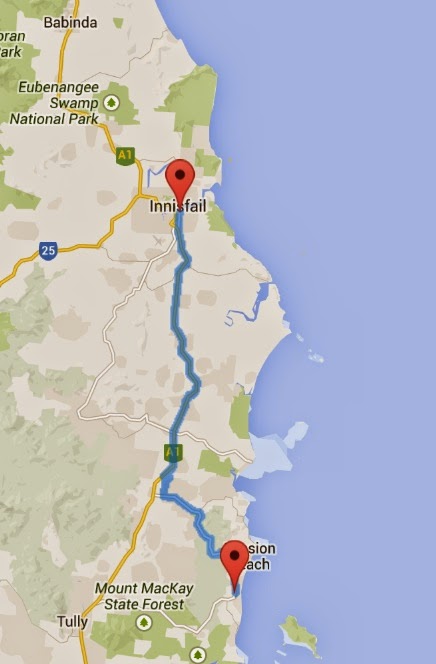 I tell you I am sick off rain!  Last night it poured with rain and sleepy head Neil heard none of it ... he gets out of the tent and says "oh there's water everywhere" yeah hello Neil it rained quite heavily throughout the night.  So we waited until the current shower subsided before getting out of bed to have brekky.  The sky was clearing out to sea but you could see that once it hit the mountains between Mission Beach and Tully it was off loading the rain held in the clouds!
We left later and it wasn't long before we had a major mechanical hiccup - the spring in my front deraileur snapped so I was left without gears at the front.  Fortunately there was only a few hills/undulations to get over the range to the Bruce highway and I could do it in the middle chain ring at the front and flick between gears at the back to make it easier to ride.
It sprinkled a little bit along the road to the main highway and there wasn't alot of traffic around ... lucky as the road is narrow and winding.
It is not until you get to El Arish at the main highway that you understand why Tully gets rain ... all you could see as a mass of low lying clouds covering a large number of mountains!
On the highway now and the road is old style and the shoulder is narrow and the traffic is never ending.  We must have missed a large down pour as the roads are wet and we are getting alot of traffic spray.
It wasn't long before you could see the mountains near Innisfail that were clearly covered in rain and as we approached it began to drizzle - not hard but light enough for us to get wet over time.  Koutas shade cloth kept him relatively dry but I think ours was more sweat than rain.
A few roadworks just before Innisfail and one was traffic light controlled and we couldn't make it through so the workmen told us to move onto the part they are working on ... so that worked out well.
The caravan park is about 4km south of Innisfail and as we got here the rain got a little heavier.  They have had 225mm of rain in the last 6 days so the area is very boggy.  The unpowered area is really soft so they put us on a powered site (no power though!) as it is firm underfoot.
We put up the tent and began to unload the bikes trying to keep Kouta dry which worked quite well, a quick dry with the towel and he was happy as larry and soon curled up in the tent and went to sleep.
One thing we noticed as we got closer to Innisfail was the temperature went up dramatically to 27 degrees as did the humidity.  So I set up the rest of the tent while Neil went into the bike shop to get a front deraileur, it was raining lightly but by the time he got back he was soaked, so the only photos today are the following 3 ... now of these 3 photos who do you think is the most content with their situation? 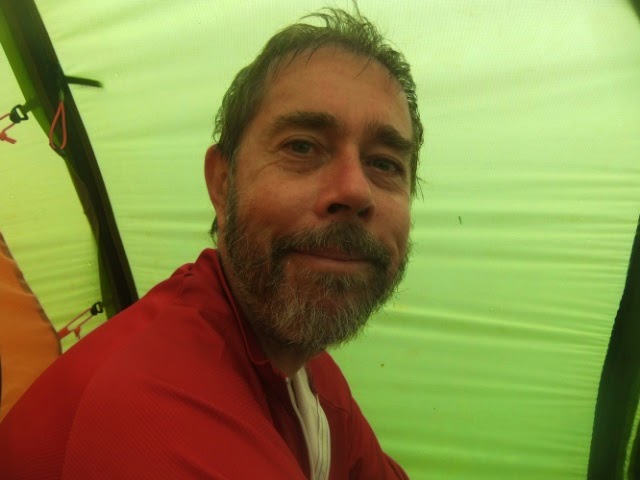 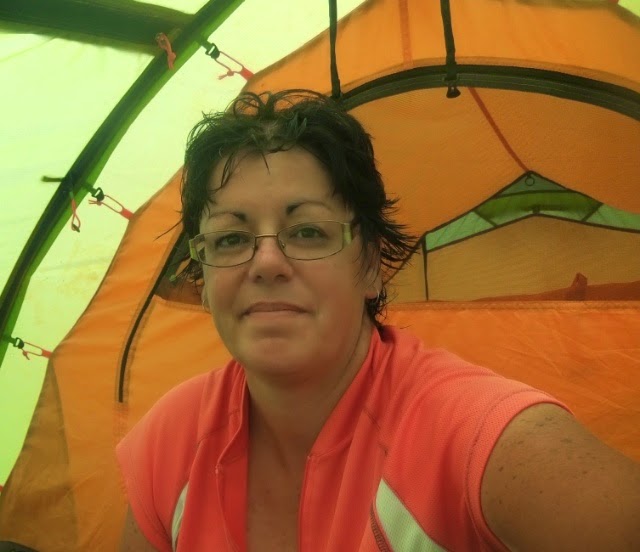 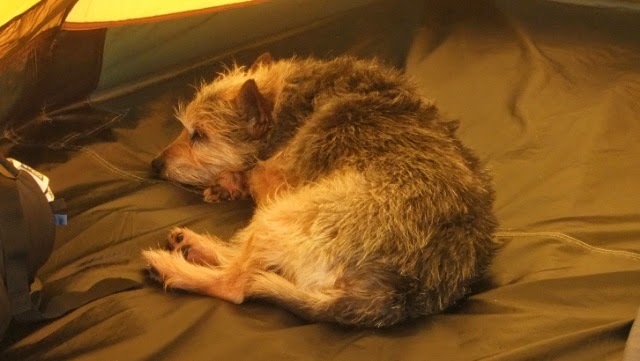 Well I hope you didn't pick me!
So the news is not good on the deraileur front they didn't have any long arm front deraileurs ... only short arm.  So the decision has be made, actually we have no choice! we have to go to Cairns. Thinking that it is a major city that most things will be open until 5pm on Saturday ... no most bike shops close at 12-2pm ... it is such a backward society up here!!! and it is about 100km ride from here to Cairns but Neil did find a bike shop with a long arm front deraileur that is open on Sunday so that means we have to stay in Cairns over the weekend.
There are only 2 caravan parks that take dogs - one is 12km south of Cairns at Edmonton at $38 per night and the other is north of Cairns at around the base of the Kuranda hill for $29 per night.  So our plans are to stay at the cheaper one and do the Kuranda hill instead of the Gillies.
I have done the Kuranda hill 20 odd years ago while Neil hasn't, it is steeper but shorter and it was very winding and busy.  So we will have to do it Monday morning so hoping we can tackle it early ... it is only a 9km hill so maybe 2 hours of unpleasantness, with any luck the majority of the traffic will be coming down the hill and not going up the hill with us!
The drizzle has stopped now and we are expecting it to be a bit like this tomorrow morning and then clear as Cairns isn't getting as much rain as what here is!
So Ray for your notes it's Cairns for Saturday and Sunday, Monday to Tolga Rest Area which is about 18km south of Mareeba and then Tuesday to Ravenshoe.