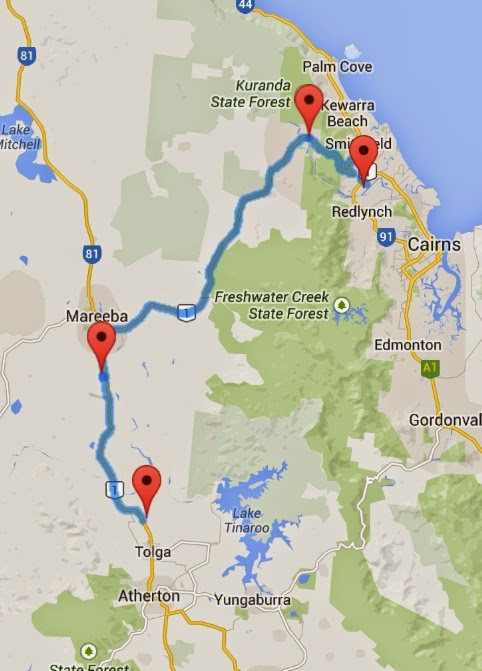 Crikey it has been a very very tough day today ... a hill, rolling undulations and head winds and too cap it all off we had Weetbix for dinner (there is a very good reason for that!)
We woke this morning and the drizzle had stopped.  It looked like that the clouds might break, not so much to let the sun through but to let the lighter grey clouds shine through instead of the darker rain laden grey clouds!
We started out at 7.30 and rejoined the Western Arterial road for a few kms and then along the Captain Cook highway (I think that is its' name) for another couple of kms and then we take the Kuranda turnoff at a major roundabout.  When we got there there was a major traffic jam to join the roundabout coming down from Kuranda and just a few cars and trucks going up the hill itself ... so that is a good sign.  As soon as you are past the roundabout you start climbing.
This hill is only about 8.5km long but it is steep in places and I had done this hill 20 odd years ago and back then it was busy and it was winding and not  much room for a car and a loaded bike ... things had not changed since then.
The first half of the hill you have the mountain side on your right so there was a somewhat narrow shoulder for you to ride in.  There were about 2 truck pull overs in this half (non in the 2nd half) and occassionally there was an overtaking lane but otherwise you are at the beck and call of the drivers.  Fortunately there were a few cars and trucks going up with us and I pressume they were locals as they weren't nervous with us and took the corners while staying in their lanes (non locals tend to either go over the center line or undercut the shoulder line!) The going was slow for everyone as since it is so winding you can't really go fast at all.
Generally coming out of a corner was where the steepest part of the hill was.  At about half way you turn a corner and now the mountain is on you left side which means that the shoulder becomes non existent (it moves to the other side of the road where there is room for it) and it also becomes even more steeper when coming out of the corners.  Not far past here there are some serious roadworks ... basically the lane coming down the hill doesn't exist so it is controlled by lights and since it is peak hour for coming down the hill the lights are controlled by patrol men.  They make us go last in our group and said to take our time as they will stop the traffic both ways for us to ride through .... fantastic!
The traffic was backed up coming down the hill and even the ones behind us built up as well as we had about 500m to ride and although that doesn't sound like much we are only doing about 5km an hour so the time to stop traffic both ways was a looooooooooooong time!
Just after this we came to a fantastic lookout  and took advantage to have yet another break ... you can't see Cairns as it is around the corner but you can see the northern part of Cairns 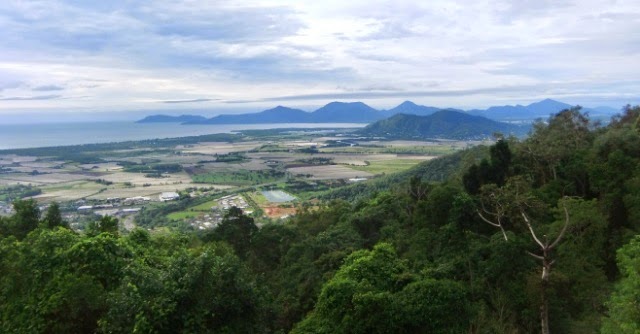 as you can see I am trying to fix my bandana that is absolutely soaked with sweat by now.  It is not a hot day (lucky!) and todays high in Cairns is only going to be 22 degrees. 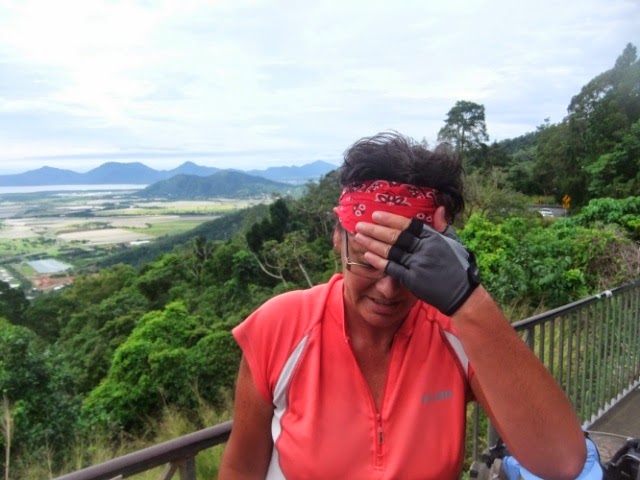 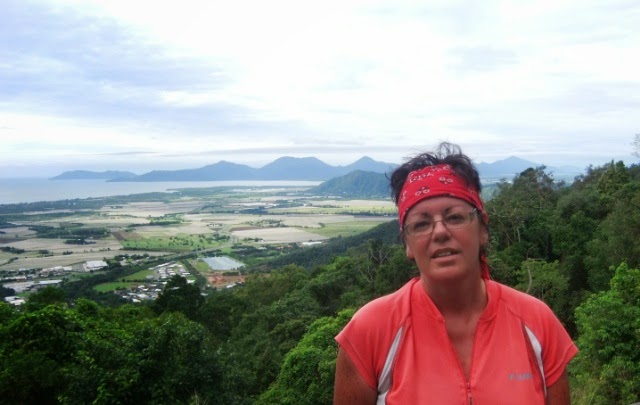 we look like 2 hot, smelly and sweaty cyclists ... still smiling though! 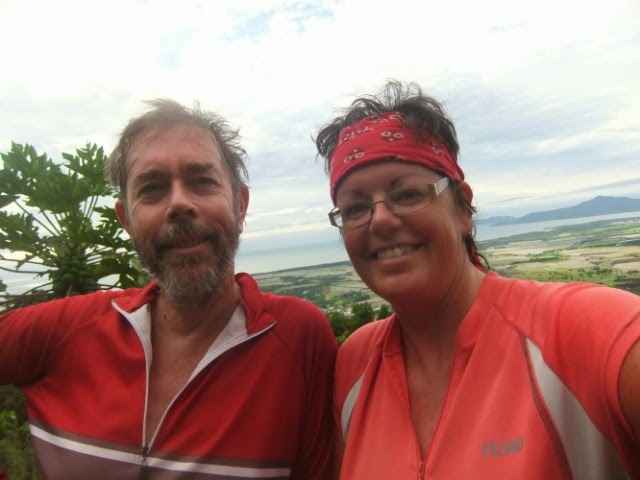 so we are about 2/3's of the way up and the going is getting harder and steeper - the gradients averaged around 5-8% with some gradients coming out of a corner around 12-13%.
Due to the traffic lights and road works we tend to have a mass of traffic and then non so the first lot we encountered we pulled over as they still have traffic coming down the hill but I found that there was no real safe place to be as the shoulder just wasn't there so for the second lot of traffic I pulled over when the shoulder could accomodate us fully and again for the 3rd lot we didn't encounter the 4th lot as we were at the top at 13.5km.  From here you go down for about 1.5km and then up and down, up and down to the turnoff to Kuranda which we see was 1.5km off the main road so we thought it was down so we said bugger that we will stop at Mareeba to get supplies, so we pulled over for a coffee even though we had only come 19km but it had taken us over 2.5 hours to get there! 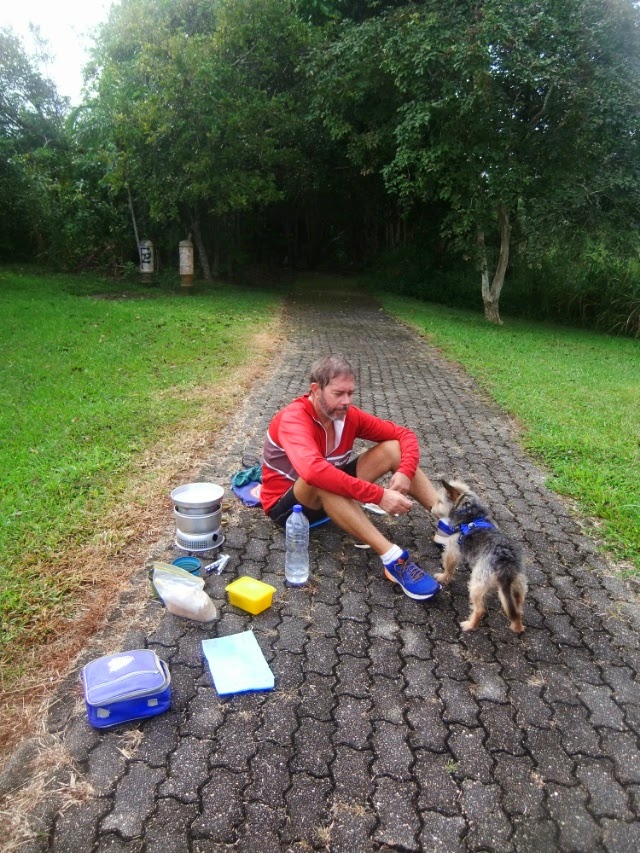 While having a coffee I said we don't have to go into Mareeba (that is another 3km off the main road) we can pick up fruit from a road side stall and we can have Weetbix for dinner and Kouta can have dried biscuits for his dinner!  It was a good decision as by the time we got to Mareeba we were knackered and didn't feel like doing a 6km round trip to Mareeba and back out again!  The road to Mareeba is busy and a rough shoulder to ride in.  It is constantly up and down and the legs are feeling a little heavy each time they have to go up a hill.  Just before we get to Mareeba we come across this sign and we are not quite sure was constitutes a 'sunny' day, definitely not today as it is cloudy 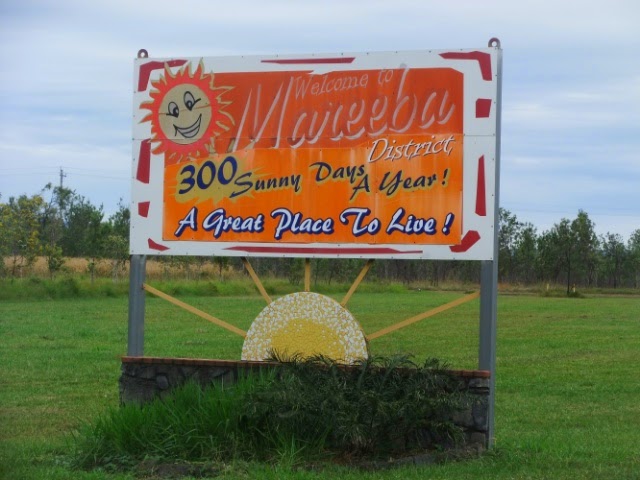 In Mareeba we have a bite to eat and stock up on water and make the decision to continue to Rocky Creek Rest Area which is another 20km south of here.  We look at the radar and see that Atherton and south of there have had some rain whereas here we have had none.
Heading south means that we are going to be going into a headwind and it is a strong one (and likely to be strong again tomorrow to Ravenshoe) so the going is very very slow as you are just gradually going up.  We do still have a shoulder until Walkamin and then it disappears.  Riding this part to Walkamin I think we have made a mistake and should have stayed in Mareeba as we can see rain ahead, the wind is super strong and cold and the legs just don't want to work (especially mine!)  We did however pull over and pick up 6 bananas for $2 and a bag of small avocados for $2 at a fruit stall about 1km before Walkamin ... 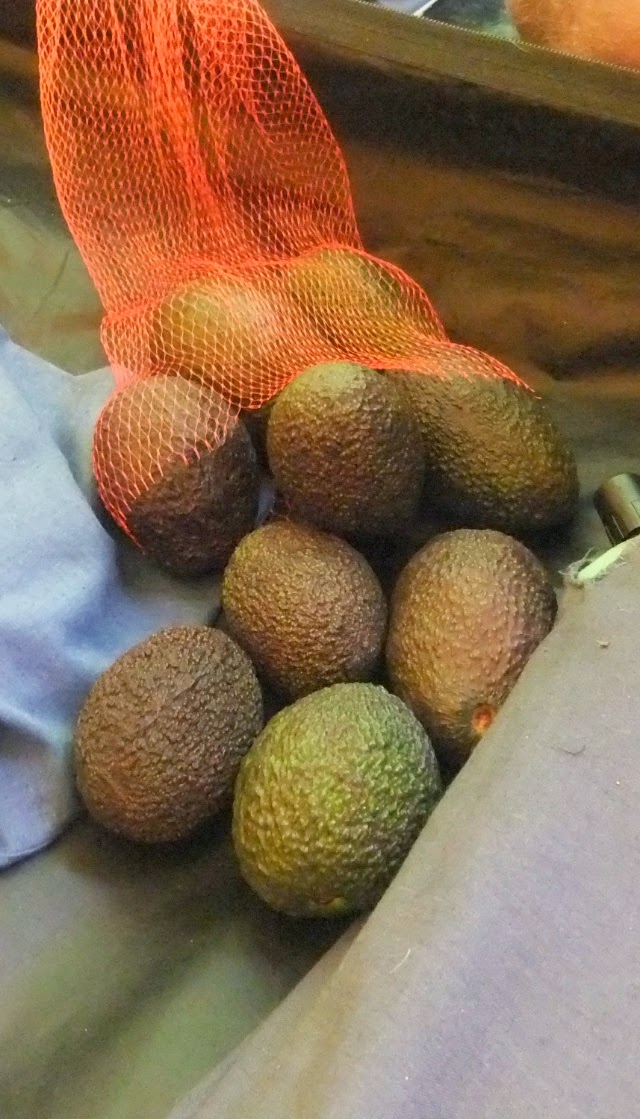 i don't know how I did the last 5km (except slowly!) but we made it, mind you the last few kms were ridden in a light rain which only got worse once we got here so there was a mad rush to put the tent up, keep Kouta dry and everything else in and unpacked meanwhile the rain is heavy and the doorway is getting wet and I am wet, cold and tired (and a little grumpy) and so over this tablelands (I remember last time we were here that I vowed I would never come back here ... and look where we are!)  At last everything is in, we have a wash in the disabled toilets and the rain has stopped but the wind is still blowing coldly.
I didn't manage to get a photo of this rest area ... it is chokkas with more vans than Rollingstone! will try to remember to get one tomorrow morning.
Since it is cold - around 15 degrees (had 2 days ago it was twice that with 100% humidity!) I was feeling the cold and had to get the pants and woollen jumper out as well as the vest, thermals and even socks!  Will sleep well in the sleeping bag tonight.
So dinner was a mish mash of whatever was in the bags - burritos, avocados, tomatoes and capsicum dip for entree and weetbix, lovely bananas and dried fruit for mains (no desserts tonight!) 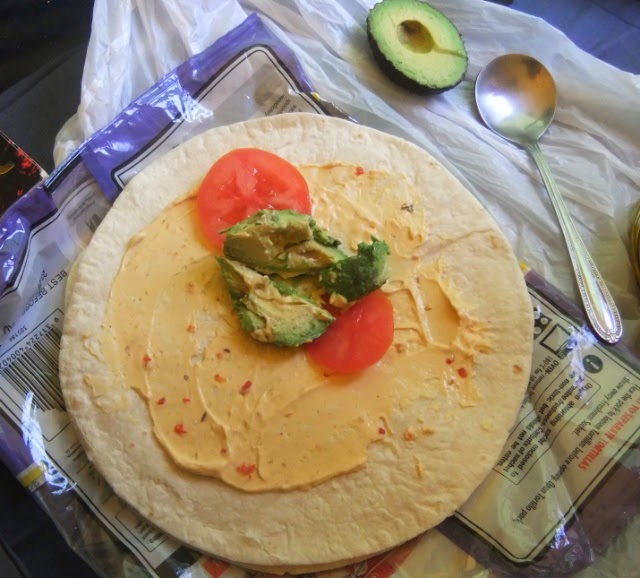 Kouta had 1 1/2 bowls of dried biscuits and he loves burritos so off course he had some (if not most!) of mine! he even got to eat his 1/2 bowl in the tent! 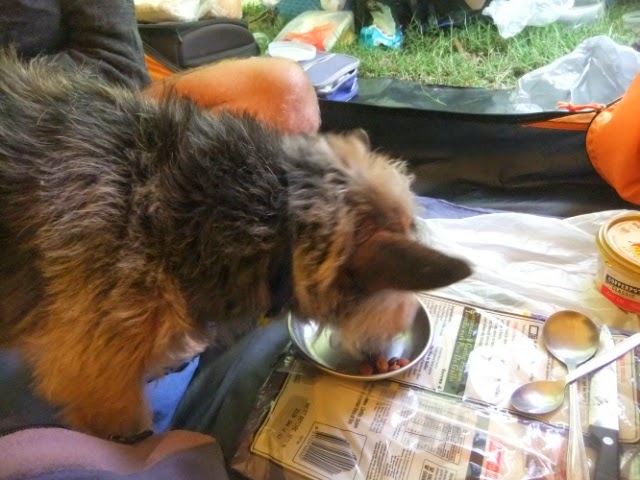 So tomorrow is another hard day to Ravenshoe.
Posted by Janet O'Brien at 6:41 PM