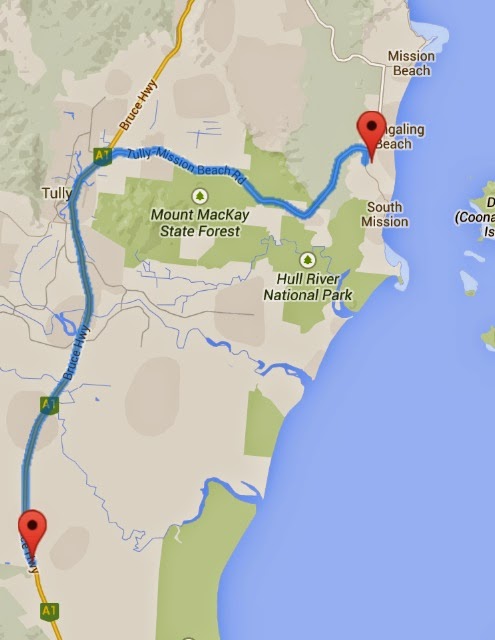 Not many photos today just one of our very expensive camp site!  As you can see we have taken a powered site simply because everything we have needs charging up now and alas there has been no sun since we left Townsville and there is likely to be no sun until we are up, over and out of the ranges on the other side ... possibly mid next week!
So we are here at Mission Beach, it is still grey but at least the rain has stopped and the wind is blowing and will hopefuly dry all our washing!
It was a pleasant ride to Tully, 21km from the rest area and we had a good tailwind, we take a break at the shelter near the information center and it begins to drizzle a bit so we decide to have a cuppa.  Tully is surrounded by massive mountains so rain clouds are drawn to them and just dump their load.  Once it clears up we move on knowing that the coast is a little clearer than around the mountains.
The road out to Mission Beach is a mixed bag - the first part is reasonable enough and then about half way along it reverts back to the old road ... which means the lanes are narrow ... too narrow for trucks and caravans so the going is difficult.
It wasn't a great ride from here.  Just before we got to the old part of the road we had a road rage incident.  Not sure why it happened but some people certainly have issues with pushbikes.  We are riding along half on the road and half in the shoulder as it is rough and not wide enough for us and we are going through a very wide turning corner so clearly cars that are behind us can see well in front of us around the corner.  All of a sudden there is a long honk on the horn (which would indicate a very unfriendly honk), we both look behind and this car has slowed down, we can't figure out why as they can overtake us as everyone can see (even the ute behind them) that there are no cars oncoming.  So as they over take they slow and then pull ahead and we both see them pull over, so we ride pass and this young girl gets out and yells at us what is our problem so neil just says we don't have a problem it is you (we haven't stopped) then she yells something about what are we a road train ... all I am thinking is that the further we go north here in Queensland the lower the IQ  gets. so she must have had issues with the fact that we are loooooooooong like a road train ... and I bet she would never say that to a truck driver driving a road train!
I cannot believe she pulled over on a quiet road to take on 2 riders .... how does she know that it is not 2 guys on bikes that could easily beat her up as she was only a slight person.  So a little unsettled we continue on but we both take note of her licence plate.
So we get to the park early and we have a powered site ... 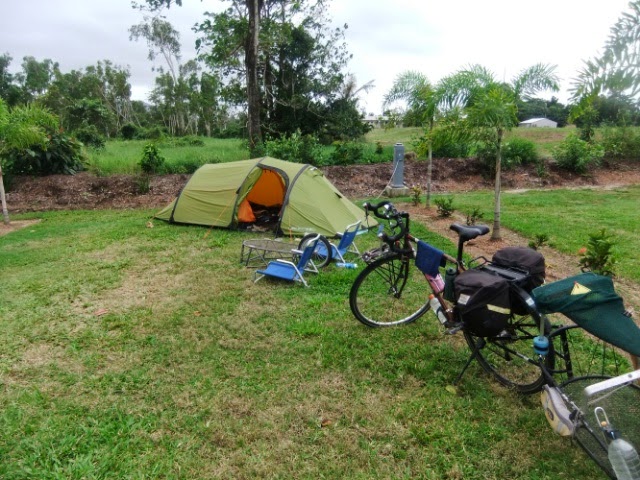 We are not far from the beach, just across the road, Neil has gone to the post office to pick up our tyres and will return via woolies. The park is nothing great, way overpriced and I can't even take my mother in laws advice and have an extra long hot shower as the shower is controlled so it is one temperature which is tepid.  So a little miffed that due to the design of the toilet block it is wide open doors and windows so a southerly breeze comes in like today and it is freezing in there especially under the shower.  But happy to be clean!  They have a kitchen so that is a positive with jug, toaster, microwave, oven, fridge but surprise surprise no hot water in tap, yet the one in the laundry is really hot!  Too expensive to do the washing here, either $4 or $5 so I am handwashing like usual and will do it somewhere when we are over the tablelands or when I know it is going to be a completely fine day!
We are here tomorrow and then off to Innisfail.
I did forget to mention yesterday that Kouta jumped out the trailer as we were riding along.  He doesn't do it often but when he does crikey it is a slam of the brakes and panic stations!  After we had come down the big hill a backpacker van was going in the opposite direction and it back fired and it sounded like a gun shot so that scared the crap out of Kouta and he jumps out, lucky he jumped out on the non road side and into the shoulder and all I can hear are his nails dragging along the bitumen.  It takes me about 5m to stop and poor little kouta is standing there tail between the legs wondering what the hell was that!  He is okay no damage!
Posted by Janet O'Brien at 2:08 PM