For today it was a very very busy day for the crew but for us not so much just a lot of hanging around waiting and watching.
We had a fabulous brekky with heaps of lovely stuff on offer – Jane the cook certainly cooks up a treat.  For brekky we just help ourselves to the cereal and then Jane brings out fresh baked bread and muffins mmmmmm it is so hard to resist but I had my usual cereal and since I had a muffin at 7am I didn’t have yet another one! 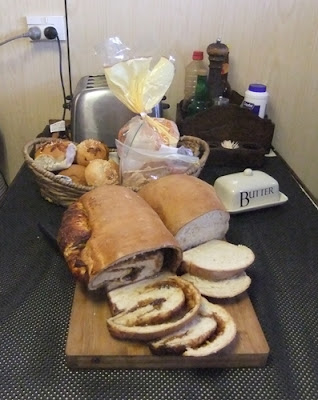 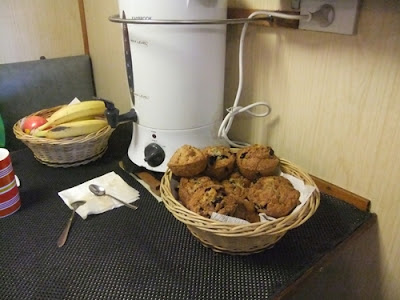 We left the passenger port at around 8.30am this morning, very excited that the ship is going to move basically to the other side of the bay 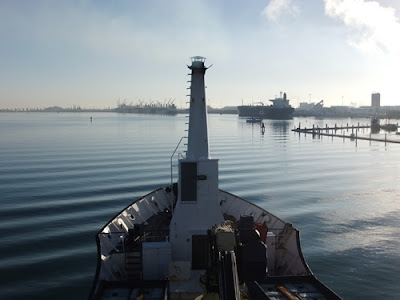 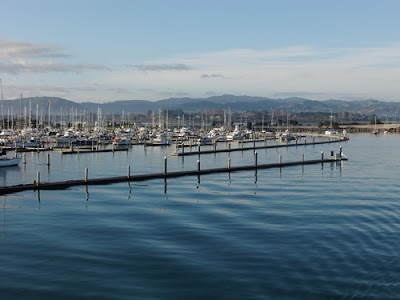 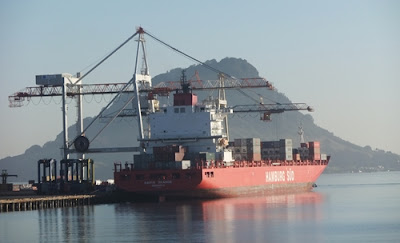 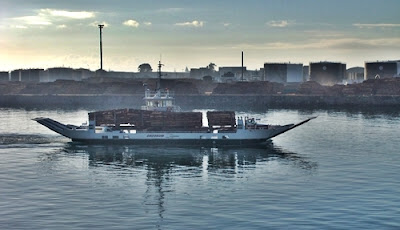 Not sure when we docked whether or not it was the norm but there was one hell of a bang and bump against the wharf when we arrived!  We are at the head of a line of 6 ships (including us) of which the other 5 are massive cargo ships …. This is our neighbour for the night … I sure hope they are quiet! 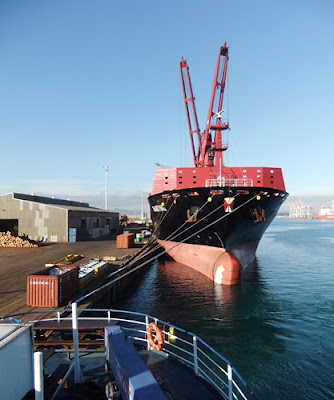 Once secured to the dock we decided to spend the bulk of the morning in the sun up on the top deck (promenade deck).  From where we sleep to the top deck is 4 flights of stairs so the legs are getting wonderful workout each time. 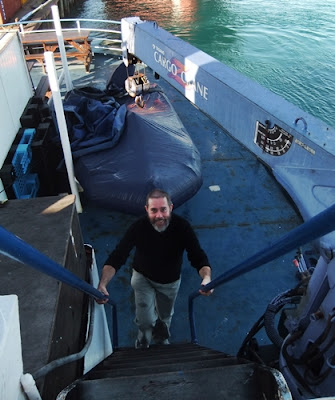 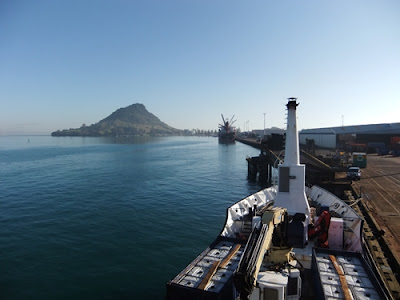 It wasn’t long until 10am came around and we had to meet in the dining area for our induction muster which was done by Maurice and skipper Hamish where the ship was explained to us and all the safety instructions issued.  Basically when the alarm is sounded we all grab some warm clothes and then meet in the dining area where we are issued with life vests and receive further instructions.

Other points include should someone go over board we are to yell out and keep them in our sights and keep yelling until someone acknowledges you and while you are doing that throw them the life buoy and also a litter trail for the ship to follow back to them.
Once finished we go back to the top and start watching the loading, here is some of the loose stuff going up (various batteries) and these are put in the ship containers along with our gear, 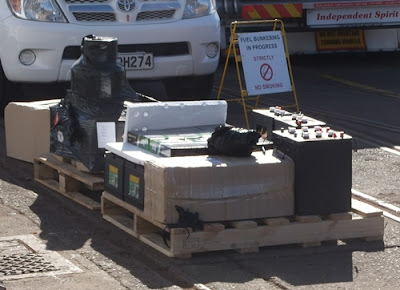 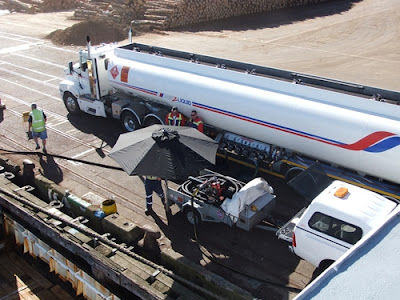 And here is what our neighbours are up to 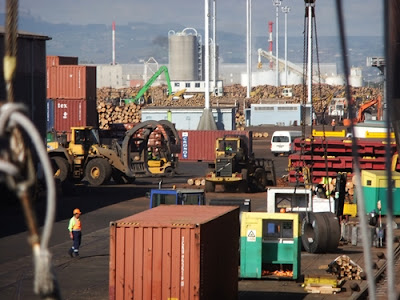 Jane serves us up lunch at 12pm and it is 3 salads – green, caesar and a lovely carrot with curry one, chicken and beef sausages, beetroot and bread.  I decided that since we don’t normally have a big lunch that I would try to stick to that and just had the salads … 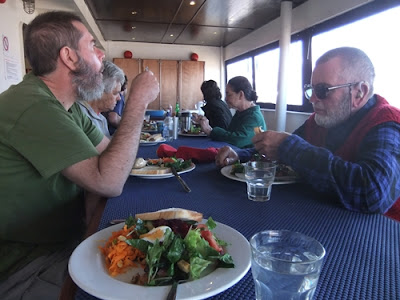 After lunch we just lounged around waiting until our bellies settled to do some exercise – we did a fitness video, a little skipping and stair climbing.
By 4pm we decided to go up and watch them load on the containers 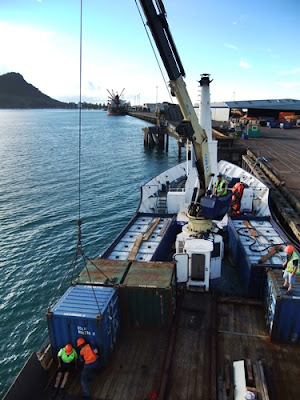 There are 10 to load on, some timber, 10 gallon drums and water tanks.  Once 9 of the 10 containers were on they packed in the timber and then started on the watertanks – 200 have been ordered and 48 are going up on this boat … basically they are giant plant pots with lids. 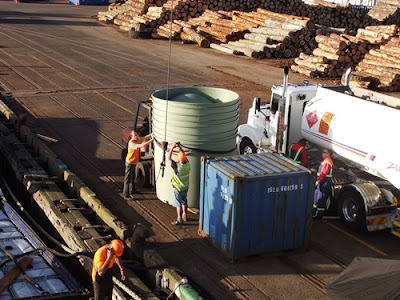 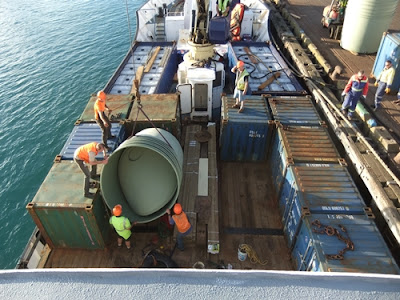 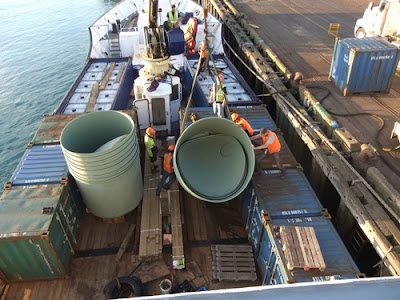 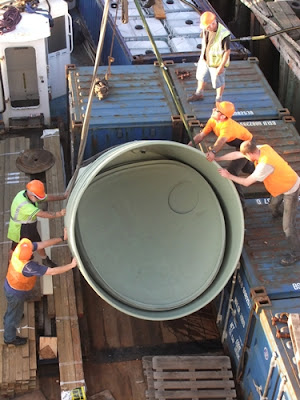 They had a hard job getting the first stack of 6 in as they kept not wanting to stand up by the 2nd lot of 6 they were getting better at it and realised that if they packed wood where they were going to place them the stacks were easier to place, by the 3rd lot you could see that they were getting frustrated as what worked for the first 2 stacks doesn’t necessarily work for the 3rd stack!  Eventually they got it and it was getting late and there was still a container and 3 more stacks to to but the port forklift driver had finished his shift so it was left for the following morning.
Sunset was beautiful and Sharon and I went up on deck to watch it 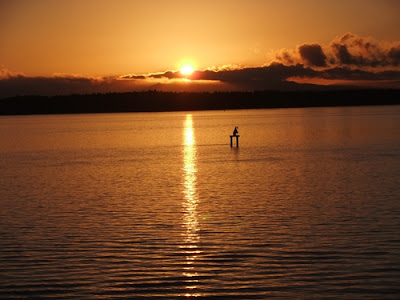 Dinner was LOVELY! Normally I am not a big fan of casserole but at 6pm (dinner time) I was famished and simply devoured the beef and red wine casserole …. Peas in all!  It also had mashed potatoes, carrots and beans.  Lucky I didn’t have such a big lunch as Mum and Sharon complained they had eaten too much.
After dinner we just played scrabble and chatted.  Bedtime was earlier – 10pm.