Monday 12 August …. Technically we have crossed a dateline and it is really Sunday again.  I left you in high spirits Friday afternoon with Sharon and Mum down with sea sickness while Neil Dad and I were fine …. That was soon to change.
Nicola, keep your tummy full of food didn’t work, I had a small meal Friday evening and I had to have it in the crews lounge (level 2), it was very hard to force myself to eat as I was feeling queasy.  All the crew say that the tablets don’t work and I was optimistic that mine were working but once down in the cabin all hell broke loose, Mum and Sharon throwing up I was throwing up and poor Neil was running around emptying buckets as quick as they were filling up and then it got to Neil he was also throwing up so it was now up to ourselves to empty our own buckets!
Funny enough once I threw up I felt fine and was able to empty out my own bucket.  After the 2nd chunder it was nothing but bile and dry wretching for the next 48 hours. So  all Friday night and Saturday night and day we were out of it.  Jane was up and down seeing if we would like to eat toast, crackers anything.  Neil felt okay Sunday and was up and about still feeling queasy but the throwing up had subsided.  My last chunder was Sunday morning and then Jane comes in with lemonade for me to sip and a little pep talk that we need to start drinking and eating even if we are throwing it up.  After she had gone off to give the little pep talk to both Sharon and Mum I thought about it and said yep I have to get up and drink, so I sat up and had some dry crackers and sipped the lemonade, had my sea sickness tablet and then went back to sleep.  I woke around 2 hours later and felt heaps better so I had something more to eat and Jane came back down with an electrolyte drink which was ghastly sweet to drink but I drank it and ate a little more in the hope that Jane would see that I am recovering and not make me drink another electrolyte drink!
So Sunday morning I made myself go up to the next level for a shower, now the crew are saying that we are having a rough few days so that is pleasant to hear and that we are not imagining all this and it is calm waters!
Now having a shower is another thing … lets just say everything has to be done with one hand as the other is holding on to something!  I am going to have a crack at shaving my legs tonight  …. I think my legs will end up looking like Norman Gunstan!!!  So after being thrown about in the shower I felt heaps better and spent the afternoon watching movies.  Neil and Dad went up for dinner as it was roast Lamb.  I did have a craving for junk food which for me is a good sign as it means that my appetite is coming back so Sharon had bought me a bag of Rashuns (cheese and bacon flavoured chips) of which she had eaten more than half on her way down from Whangarei! So I nibbled on them and felt better but still couldn’t stomach the dinner.
I went in and chatted to Mum who hadn’t thrown up all day like me and ask her if she was still taking her round of sea sickness tablets and she said yes.  Then on to Sharon who is in much the same way but takes a little more convincing to take here sea sickness tablets – although these tablets don’t stop the sea sickness it does help with the motion sickness and since we were all approaching our the end of our 48 hour sea sickness session we were now experiencing motion sickness.  So she took a tablet, had an electrolyte drink and some crackers and went back to sleep.
Neil felt a little queasy after dinner so I suggested the sea sickness tablet to him so we both took it before we went to bed and woke up this morning feeling better – even Sharon was better, she was up, dressed and determined to get up stairs for brekky.  Mum tried but alas was feeling up to it.
Brekky was delicious – what we haved called ‘toast with the works’ … basically toast with nothing on it!  I managed 2 pieces and Neils appetite is back as he had 2 small bowls of cereal and honey on bread.
Right now for morning tea I am having cabin bread – a plain hard biscuit.
Earlier Neil and I went up to the bridge which is on the 4th level – as you go higher up the boat you feel the motion more so we got up there and quickly sat down in the 2 captains chairs and Hamish was explaining what had happened the previous 2 days – due to rough seas while travelling east he had to go north to go above the low … way over my head with understanding.  But it was great going up there – quieter and once sitting in the chairs the motion wasn’t as big. 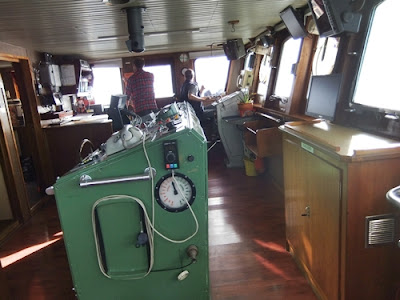 Trying to caputre the volume and height of waves is very hard, I did a movie out of one of the port holes in the crews lounge level 2 but that didn’t come out as great so up in the bridge area I took a photo with the camera dead straight with the horizon (which never changes) and you can see the tilt/rock of the boat in relation to the horizon 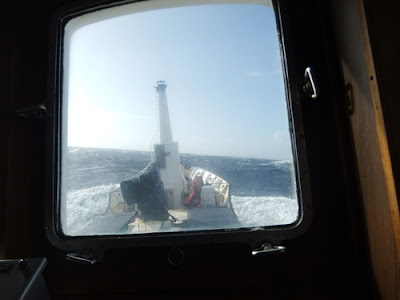 The movie of this is awesome as the ship goes through some calm of gentle waves and then all of a sudden there are the huge swells and the ship rocks and dips … great to watch now that I have my sea legs!!!
Mum has just woken and is eating … her goal for today is to get to the 2nd level for a shower … baby steps!
The crew were shocked to see us out and about but relieved that we were or else they were going to have to force feed us to eat and drink.  I must admit my appetite isn’t quite with me and I am eating plain and simple.  Unfortunately dinner tonight was fish cakes or beef schnitzel with salads and I had a little schnitzel which didn’t quite sit in my tummy tonight so best to avoid fried food!