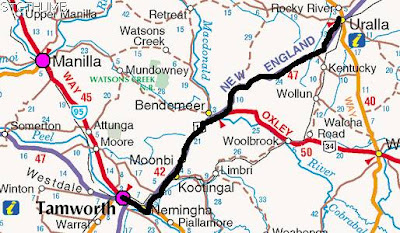 It was a wet rest day in Uralla and between showers in the morning I managed to duck into town to by some socks (very limited in choices at St Vinnies!) but I managed to find me a pair and Neil a pair of football socks (orange, purple and white - not sure who's team colours they are!). Nevertheless they were warm. Uralla is an old town and is really pretty and it is a shame that it wasn't a fine day for these photos. 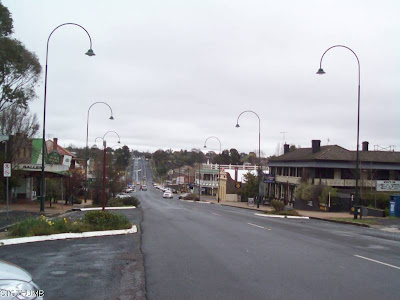 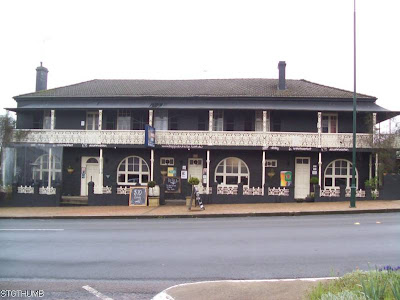 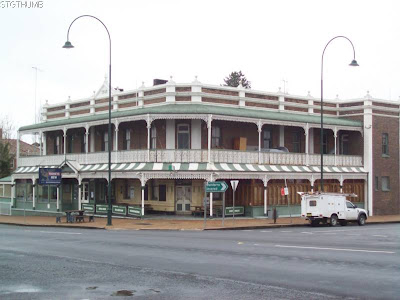 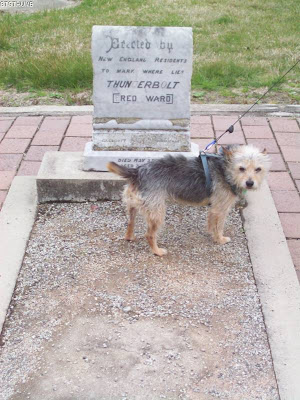 One thing Uralla is famous for is it is the resting place of 'Thunderbolt' or Fred Ward who is an outlaw and off course you can see from the photo above Kouta has all the respect for him and walks all over his grave ... don't worry as much as Kouta likes to pee on absolutely everything now he didn't pee on his grave!!!
Just south of Uralla on our way to Tamworth the next morning we passed the rocks where apparently 'thunderbolt' use to hide out and watch the surrounding area. 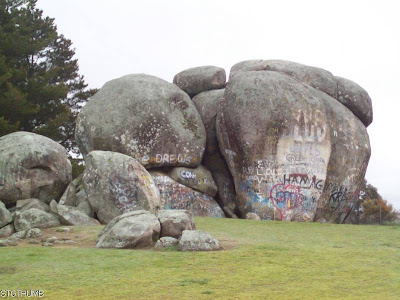 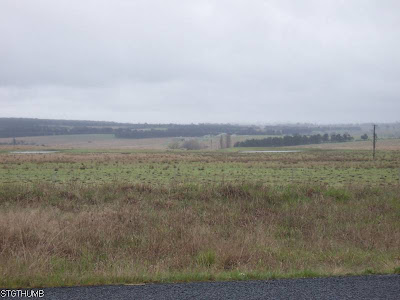 It was a very fine misty rain but enough to put the gortex on - but eventually it got too hot to ride with the rain coats on so we took them off.
For the first 20km you are steadily climbing up to 1100m and we have joined the New England Hwy and this is a very busy hwy and for the first 10km or so the shoulder was a bit suspect and sometimes very narrow in places! Then eventually is became very wide but unfortunately it was very rough, full of holes, glass, crap and generally not very nice to ride in - in fact the whole bike just rattled as you rode along - very disappointing riding in it as you know on the other side of the white line is a perfectly good and smooth car lane that you can't ride in as cars and trucks won't like it! So we were forced to stay in the shoulder the whole way.
After 20km there is a major down hill ... basically it looks like you just drop of the face of the earth! but you don't you go down to about 800m and at times it is steep and you couldn't pick up speed because the shoulder was just too rough and I always fear that I will loose control or do what I did in Canada and that is come of the bike - 2 things I have no faith in ... 1)my bike being able to cope with rough conditions and 2)any councils (whether is be here or overseas) ability to make roads!!!
Once you are at the bottom you begin to climb back up to 900m and only to go back down again to Bendemeer. At this point I am beginning to get annoyed with having to ride in the shoulder in atrocious conditions and I am beginning to tire of the undulations (yes we are suppose to be going downhill!). At Bendemeer we picked up water and continued on to climb over the last range - the Moonbi range and at the last hill of this I realised that I hadn't had lunch so was feeling a little worn out and moody so I ate a muesli bar and continued on feeling alot better to the top.
From here is you have one hell of a down hill (I am glad we didn't come up it!!!) basically it is divided into 3 lots - the first 2km is steep and full of emergency truck arresters (which means that should the brakes fail they make their way to one of these and go up one of these sand tracks and that it acts as a brake!) for this 2km these arresters are on the other side of the road so they do have the potential to take out oncoming traffic. The next 2km is not so steep also has truck arresters. The final 2km is where the hwy divides into 2 (one way lanes so to speak) and is again very steep but this time the truck arresters are on the left side of the road so that means that should I look in my mirror and see a truck careening out of control behind me and I am near one of these emergency truck arresters then either I pedal like crazy to get past one or slow down!!!
Just before the final hill our turnoff to the rest area that we are staying at tonight is there so we cross over the one way lanes (perfectly safe!) and climb a 'munter of a sooty grunter' (remember that dad!) of a hill which was worth it in the end as the view from our camp spot is absolutely stunning. I tried to piece the photo together but it hasn't quite worked! 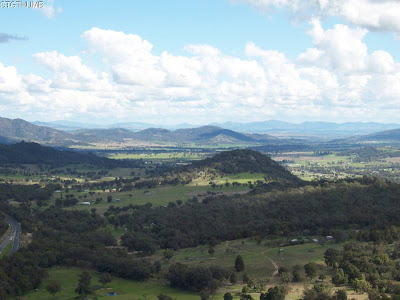 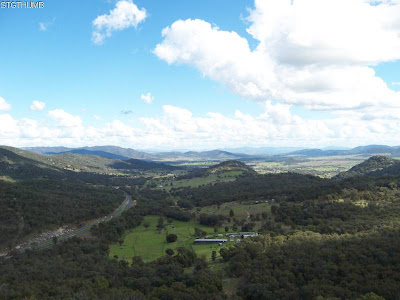 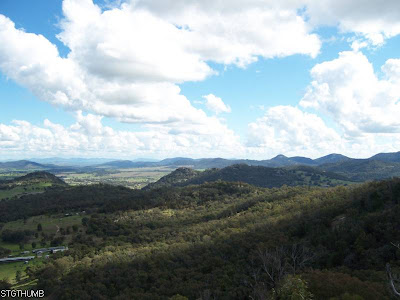 ... but you get the jist of it - there is a stunning view of the plains below from the lookout. 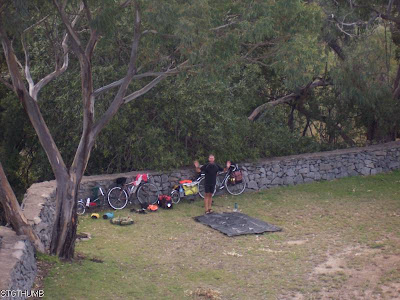 and being on pushbikes we can generally camp in spots where cars and vans can't! 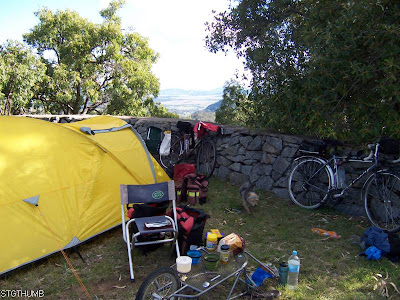 So I was rather relieved to get here and I think for me the day was probably one of my worse days riding - I didn't enjoy it at all riding along the highway and it confirmed that we won't be going to Scone (as we have to go along this highway). In fact it was just like the Bruce hwy - I don't like being forced to ride in a shoulder especially when it is bad! 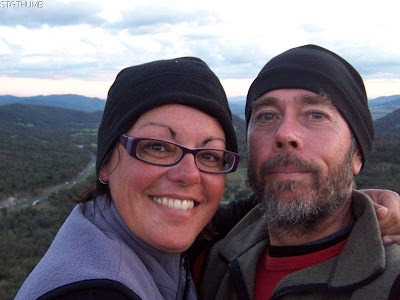 Oh is that a nice photo of us!!! I am not sure what Neil is thinking at this point ... he certainly has a funny look on his face ... but gosh don't we look like vagabonds!
During the night it really blew a strong wind and lucky we were camped by the stone wall as I think it sheltered us a bit - so all night long you could hear the trucks grinding up in low gears going up or grinding down in low gears going down and the howl of the wind!
It was a lovely morning and we got to Tamworth a little earlier than what I though so we pulled over at the nearest rest area and had a coffee. But at this rest area was a sign about the sister cities to Tamworth and I would like to point out the 2nd town listed ... 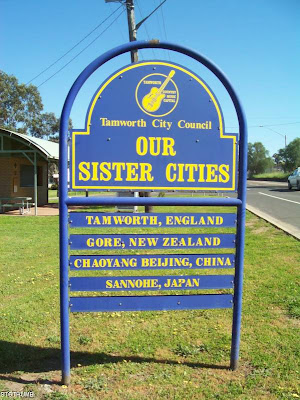 ... I think this is a sign that we should move to Gore - since Neil always says we are going to move there.
The road is busy going into Tamworth I suppose because it is peak hour traffic and the shoulder is really bad now even Neil is complaining! and the roads around Tamworth is not that great either. So after popping into the not so helpful information center we found the supermarket and bought food and continued through and south to our caravan parks - which by the way are all way out of town (except 1 which doesn't take dogs) so it is a 6km ride tomorrow to pick up more food supplies for our next haul to Coolah and then onto Wellington.
The campground is nice and quiet and we will look for a road that cuts across from here that will get us to the road heading south to Quirindi so then we don't have to go back into Tamworth itself!
Believe it or not staying at this campground is a couple that was at Morven (around 3 months ago) and he recognised us immediately from the dog!
Oh below is the 'golden guitar' since Tamworth is famous for its' country music festival which is held in January 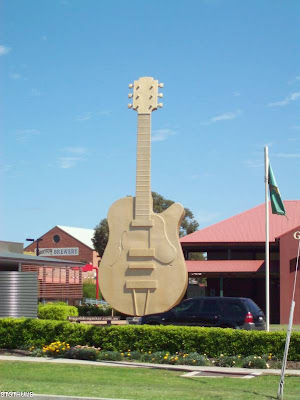 and no Dad I haven't seen Patsy Rigger and not likely to since the town has 32,000 people in it!
Posted by Janet O'Brien at 6:39 PM