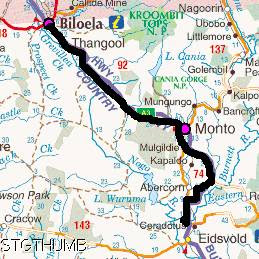 Below are photos of our camp spot at Biloela - these were taken on our final day as it was the only fine day we had - lucky we had a camp kitchen to shelter in when it was cold and wet. 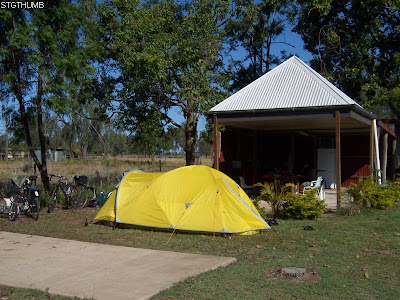 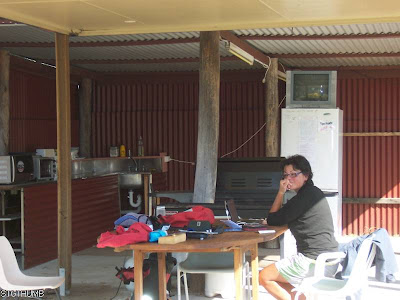 Now this was a tough day - we knew we had a climb today and unfortunately it was right at the end of the day - I prefer to have it somewhere early in the day but it was around the 70km mark!
Basically our day was a bit like this - our first 25km to the base of the tablelands was flat, then 3km up and another 10km of gradual up, 5km of undulations, a few kilometers of flat and then right up to 69km it was just up and down, then 2km of steep climbing (6%), 3km of gradual climbing, 2km down and then 2km up to the rest area! This is good practice for NSW I think! 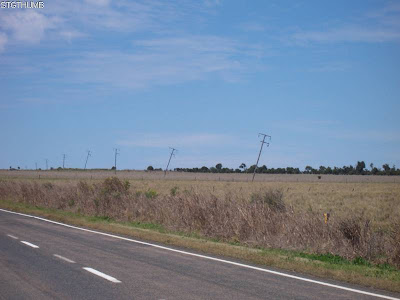 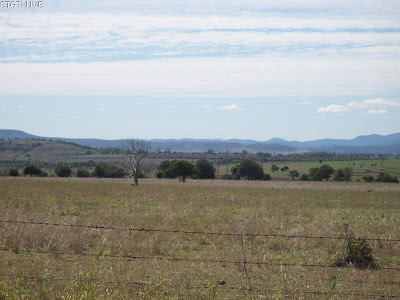 The above photo is of the Calliope range.
It certainly is beautiful riding along this Burnett Highway and despite the hills I am glad we came this way. There was not much wind today only up at the tablelands and also not much traffic so the riding was excellent. The legs felt good after a long break at Biloela and despite the very full and heavy food bags - Neil and his orange sticker fetish! There was conflicting information about whether the rest area has drinking water so we had to carry water as well. 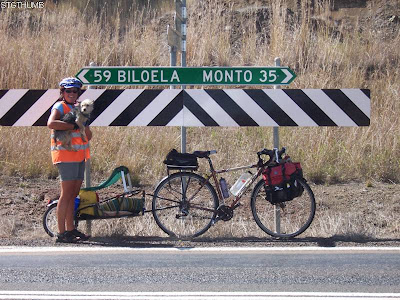 This was taken just before we approached the climb. 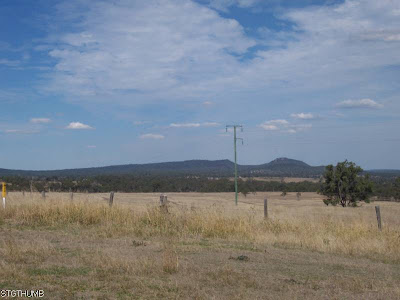 We weren't quite sure where the road was that climbed over this range - but I think it winds its way to the left hump. 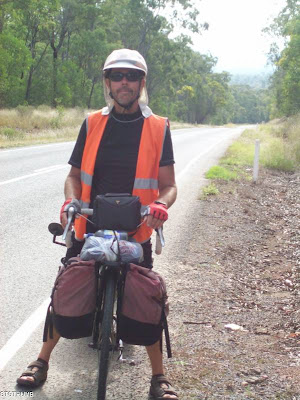 Neil is smiling still even though we were half way through the first 6% climb.
It took us most of the day to get to our camp spot and it was at the top of the final hill - around 650m above sea level (we had started at 181m above sea level). I thought that the night might be very cold since we are up a bit high but the rest area is in and amongst the state forest so we might have a little cover. The rest area has toilets and a rainwater tank and there are only 2 other vans here tonight. Apparently the night before the rest area was crowded! 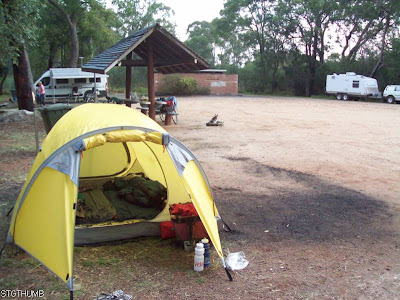 We sat around a fire with the other 2 vans and Neil got to do his favourite thing and that is 'chat' and we even got offered dinner from one of the caravaners - but we declined as we had to eat weetbix to get rid of some of the yoghurt I was carrying (a 1kg tub with an orange sticker on it!!!).
Coaminglah Rest Area to Monto = 21km 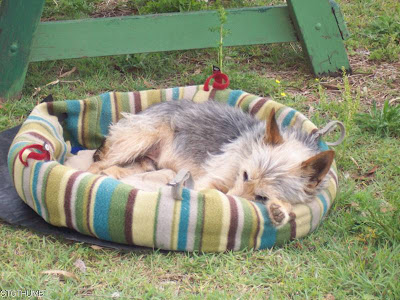 Kouta after a tough day!
it was only a short day as we had a very late start due to people chatting to us - first it was one of the caravaners that was at the rest area last night and then someone popped in and they started to chatting to us ... we didn't get away until after 10am!
We had a lovely down hill 6km at 7% and then it was a nice rolling ride to Monto. Along the way we were just coming up to the top of a small crest and there was a small shoulder but since there was hardly any traffic we were out on the road and just near the top of the crest in the shoulder was something that looked like a piece of tyre - we both looked and saw that the front part was up of the ground so it definitely looked like a tyre and at that point about 20m from it a car overtook us and the piece of tyre moved! It was a snake so I screamed snake snake! and Neil said that he saw it so we moved to the other side of the road but the car had spooked it and it had slithered back into the grass - hence why you don't ride in the shoulder!
We got to Monto just on 11am and we where umming and ahhing about whether or not to continue - I find it very hard to get motivated when we have such a late start - so we decided to stay at the caravan park. 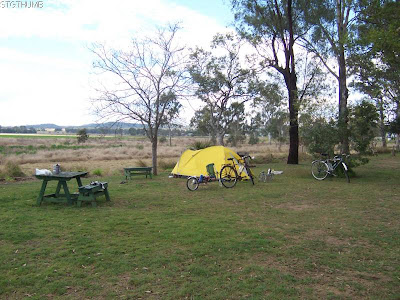 It was a quiet caravan park and this was our spot.
We came back into town to find a power point and there is plenty around but they all had locks on them so we couldn't do the blog! As we were riding along we found a digital camera on the side of the road - the camera was not great but it did have a 128mb memory card in it so we ditched the camera and kept the memory card!
Monto is a very 60's type town the buildings remind you of the movie Grease! the town hall and one hotel is really 60's looking! 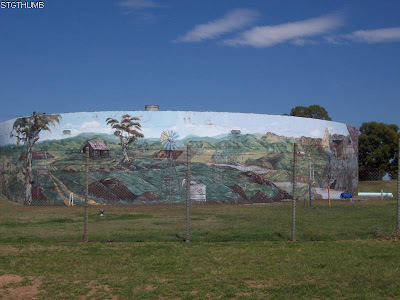 As you enter town the town water tank has a nice mural painted on it. 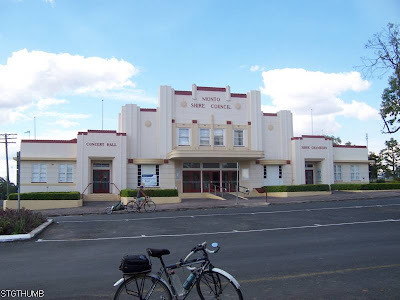 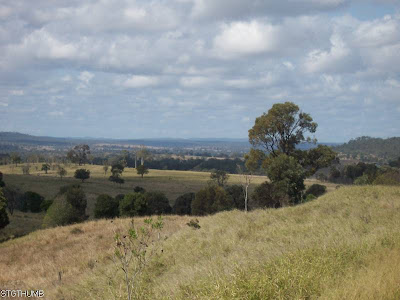 Just before we got to the rest area you could smell smoke and a very sickly sweet smell which we both thought smelt like sugar cane burning (but it is not as there is no sugar cane around this area!) and we came across this log still burning. Not too sure on why the farmers burn their fields and alongside the road - maybe as a fire break or we have heard some farmer say that it changes the composition (of maybe weeds to grass that stock eat). 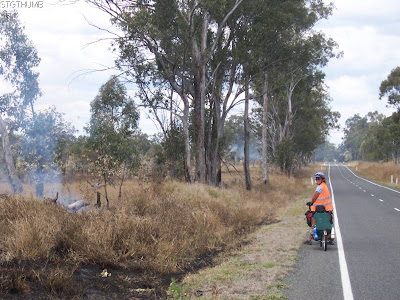 the undulations were okay to cycle they are small to climb (the occassional big one!) and they all had decent downhills with them so the legs could recover before starting another one. We only had one bad incident with a cattle truck that wanted to run us off the road but otherwise the traffic is generally very courteous to us.
The road is a little rough in places but with minimal traffic we can pull out around the rough patches.
We have just heard that the Bicycle Queensland ride is coming through this area this weekend and they will be staying at Eidsvold which is just down the road.
We got to the rest area and decided to stay here tonight rather than go to Eidsvold caravan park. This is a lovely rest area - close to road but that is nothing since it is such a quiet road anyway and has table, shelter, toilets and rainwater tanks. It is right next to the Burnett river and the railway line (which I am sure is not used at the moment!) and has an historical train station building with old pictures etc 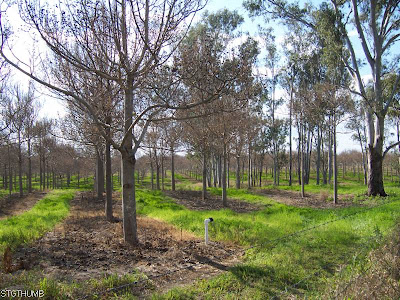 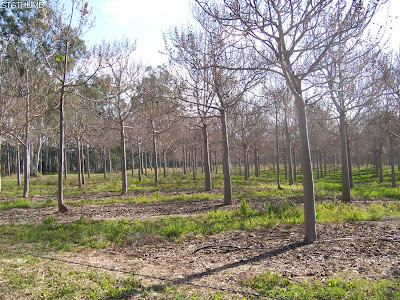 Can't remember the name of these trees which were right next door to the rest area but they are used to make furniture. 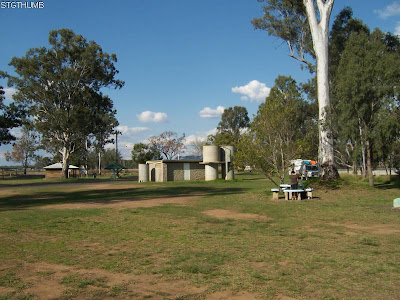 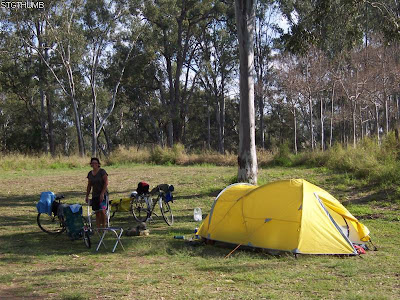 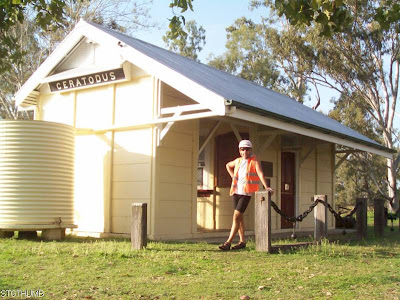 and Neil posing outside the train station!
Not alot of caravans here - less than 10, in fact there is not much travelling caravaners through here - I think they all take the Leichhardt Highway.
Posted by Janet O'Brien at 10:45 AM