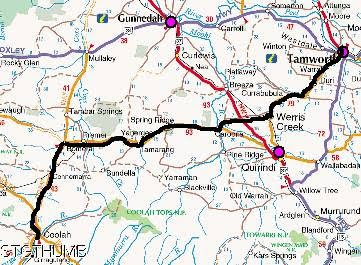 It was a fine sunny morning and we picked up the road heading south of Tamworth for Quirindi and for a Friday it had heaps of traffic on it and no shoulder and typical of NSW roads the surface was bad! It is a gentle climb up to Werris Creek. Before there we stopped at Duri for a quick break and in the small rest area they had a restored
Moffat wagon (not sure what that is used for!) 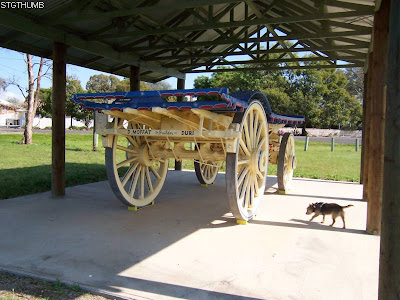 From Duri we were still gradually climbing to Currabubula but we cut through between 2 ranges and go down a bit to Currabubula. From there you climb a bit more and then begin to undulate. The scenery is really nice with all ranges around you but you are sort off on flattish plains. 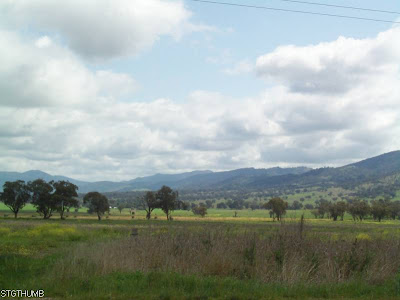 Just before Werris Creek you have a nice 5km gentle downhill and this is where we had our cuppa at the football ground - apparently home of the magpies - not sure if that is related to AFL or not - I don't think so as this is still NRL territory! We picked up water at the football ground as Caroona Hall rest area doesn't have water. One thing about this football ground is that we couldn't find the womens toilets so I had to use the mens toilets!
From Werris Creek we turned west to Caroona which is another 24km away. It is a flat quiet road that crosses the Quirindi - Gunnedah road and joins at the Quirindi - Coonabarraban road. It was a nice quiet back road full of pot holes! 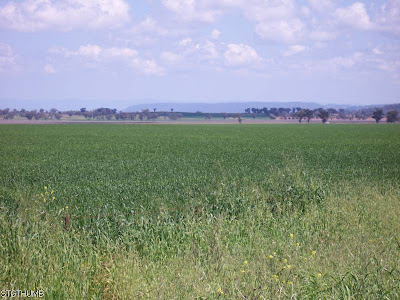 While along this road we saw a dead brown snake (killed recentely) and 2 crows were going hammer and tongs at it until we rode by and they flew away - I suppose with the warm weather starting the snakes will start to emerge again.
We got to Caroona Hall and all it is is a corrugated building with toilets in the corner block - the womens didn't have toilet paper and were a little grubby and since Neil and I were the only ones there I used the mens toilet again as they seemed remarkably cleaner and also had toilet paper! 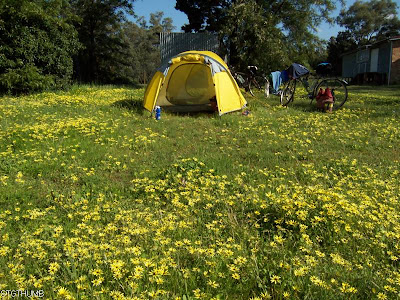 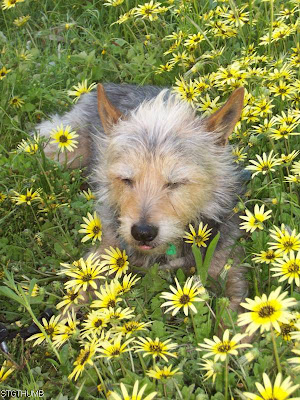 Doesn't Kouta look cute in amongst the daisies - he and I are beginning to suffer from allergies now - for him it is the grass that makes him scratch and for me it is the grass and pollen that is blowing seeds etc.
So Caroona wasn't a bad place but okay for us. This is the place that is trying to stop the mining explorations that are going on as it is prime pastoral land and the mining companies want to buy up all the land.
We woke to another beautiful spring morning and were heading for Premer. It was a flat ride to there and along the way we took a drinks break at Spring Ridge and I must have left my drink bottle there as when we stopped for lunch there was no bottle in one of my bottle carriers!
The road to Premer across the Liverpool Plains is particularly bad in places but the scenery is nice. This morning we heard on the ABC that Premer was holding the Lions cricket tournament so we assumed that the rest area would be crowded during the day. We got to Premer just on lunch and it was full of cars and rowdy but not quite drunk (yet!) me. We heard that this tournament is on during Saturday and Sunday and we assumed that it was some district thing and they would go home at night so we set up tent in preparation to listen to the AFL grand final on the radio and then we realised that these men are not going home tonight as some have come from Toowoomba and Woollongong!!! So it was too late to pack up and camp further on in the bush so we stayed put and had to put up with them. At night they watched their NRL preliminary final of which we fell asleep through it but we did have a very disrupted sleep as every now and then you woke up to some loud drunken lout screaming away at 2.30am in the morning! At least they didn't hassle us!
In the morning we were okay and glad to get out of there (we should have bushed camped!) - there were 30 teams there and we couldn't believe the amount of alcohol that was consumed and the behaviour of some men (not all necessary young!) and the language - what is happening to the education system when every 2nd word is 'f' this and 'f' that!!!
We left there pretty early in the morning and I tell you most of the men looked absolutely 'green'!!! and the day was very warm and sunny and I am sure there would have been a few vomit piles on the cricket pitch today!!!
It was a 5km climb to get out of Premer and then a 2km downhill to meet up with the Black Stump Way. We have been on this part of the Black Stump to Coolah before but we forgot what it was like and all we could remember was a 6km climb out of Coolah which meant that today we would have a 6km downhill into Coolah!
From the intersection it is a gradual 10km climb and then just up and down and along through the valleys! We also forgot that this road is also quite rough in places ... in fact ALL NSW roads are absolutely atrocious! even the highways are bad! 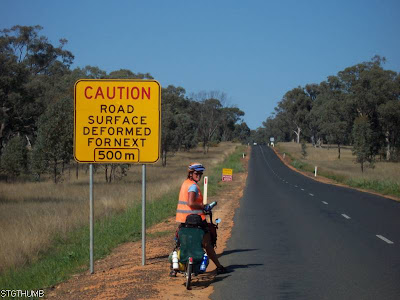 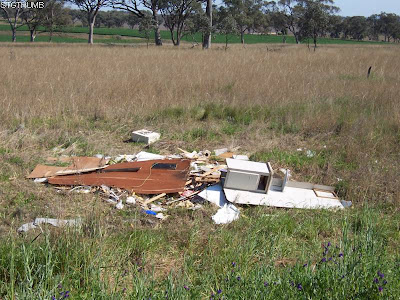 Despite all the warnings people did not slow down at all and as a result some pour caravan in the past has probably broken some part where it connects to the towbar and come off the road and down the embankment! I think the constant uneveness and potholes in the roads have put alot of stress on vans and trailers and eventually they snap under the pressure - a bit like our back wheels the constant jarring and bumpiness has put the bike under alot of pressure and spokes and wheels just have to give!
Due to recent rain the fields and pastures look very lush and when you look around you most farms have green paddocks and yellow paddocks and apprently the yellow ones are canola as these yellow flowers can be seen alongside the road just growing. Apparently the canola are expensive to sow so that is probably why they only have one of their fields full on canola because that is all they can afford!!! 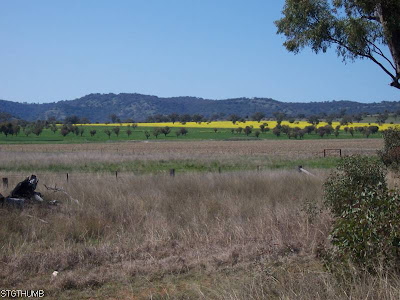 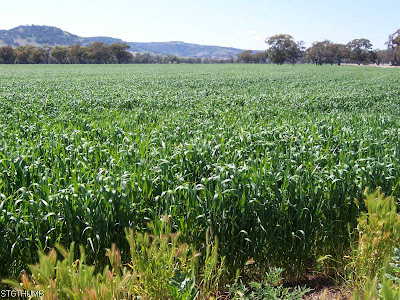 We think the other green fields are probably wheat.
The last 20kms into Coolah are up and down through 4 gullies and everytime you go up you go up a little higher - we forgot about the uphill to get to the down hill!!! in fact we could only remember 2 gullies but instead there was 4!!!
We got to Coolah just after lunch and spent the rest of the afternoon reading out in the sun. Since it was a Sunday we had pizza for dinner as everything was closed. Another 5 vans turned up later in the evening and 2 were full of children that just ran amuck - sometimes I think caravan parks should ban little children and not dogs! Those kids were just noisy and yelling all the time and this morning (our rest day here) they were in and out of the toilets and made a little bit of a mess with the toilet paper etc everywhere - the poor cleaning lady! As these amenities, although the decor is very 70's, are very clean.
Coolah is a lovely country town and while waiting for Neil in the supermarket I got to watch the comings and goings of everyone in town - you can tell it is the school holidays as the teenagers are home from school and are taking Mum to the cafe for a coffee! this town has 3 cafes in it! and funny enough only one side of the main street is busy and the other is full of empty shops all except 1 cafe so not sure what is going on there.
Later on in the morning it absolutely poured down with rain and the temperature dropped dramatically It rained for about 1 hour and some of the down pours were very heavy ... after the rain it cleared to be a nice sunny day!
Posted by Janet O'Brien at 2:42 PM