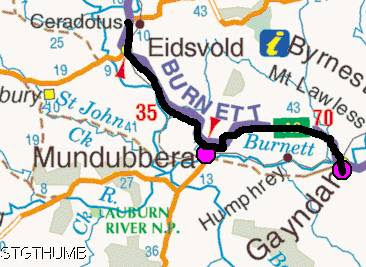 Ceratodus RA to Black Stump RA -
Since we sort of didn't plan to stay at the Ceratodus rest area last night we sort off didn't have bread (which is one of our staple foods!) so we had no toast this morning. Since Eidsvold is only 10km away we decided that we would stop there for a cake if they had power points so I could jump on the computer and do the blog. We had a 3.5km climb to get to Eidsvold but that was a nice climb. Just outside the local CWA building is a table, shelter and power point so we managed to get the blog on a word docoument as there is no optus internet reception and the telstra one has no credit on it at the moment. So Neil ducked over to the local supermarket and bought a mudcake and we had a cuppa while I did the blog.
We left around 10am and we noticed a little more traffic than normal which I think it maybe due to the fact that there is a road that connects Eidsvold to the Leichhardt hwy at Theodore. It was up and down and undulating most of the way to Munduberra and some of those undulation ups were very nasty! But for all the climbing there is a very good downhill into Munduberra about 10km out (but within that downhill there is another uphill!)
Munduberra is set off the highway but our rest area was on the highway so Neil went into town to get food supplies at the local IGA. 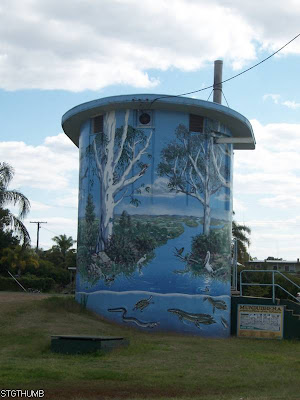 It seems towns along this Burnett highway like to paint their water tanks! The town has 2 caravan parks - one doesn't take dogs and the other is primarily for backpacker workers as this is suppose to be the biggest citrus area in the southern hemisphere! - we think this might be grossly over exaggerated as we are coming near to the edge of the shire and have seen 2 mandarin farms! Although we have seen a few trucks carrying the fruit but nothing to warrant it being the largest citrus area in the southern area! We came across only 1 farm selling mandarins on the side of the road and thought since it was situated at the base of a hill that we will flag it and there should be more farms further on ... we haven't seen any!!!
The rest area is more suited to mobile homes than caravans and there are 4 other mobile homes here with us. 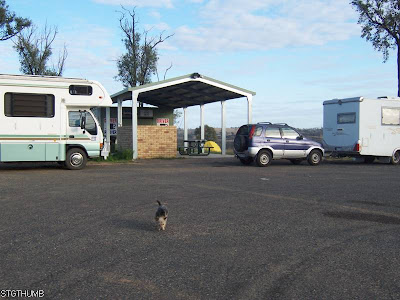 The 2 ladies driving the 2 mobile homes in the photo are together and we chatted with them for most of the afternoon. The one driving the mobile home on the right is a real "ipad, ipod" guru and she showed us here ipad and we are liking it! 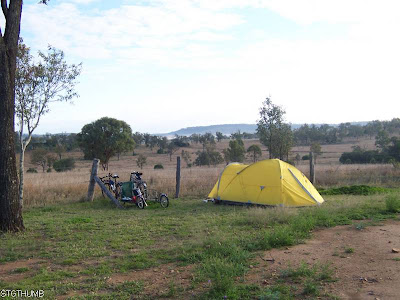 forutnately for us we can camp on the grass and this was our spot at the rest area.
Black Stump RA to Gayndah -
Oh I tell you there is alot of climbing along this highway and if it wasn't for such nice scenery I would hate it! Actually the legs feel okay overall once you start going up them but the constant up and down for our 5th day cycling is beginning to tire the legs a bit and they felt a little tired going up some of the undulations.
We left the rest area and there are some nasty nasty undulations for the first 5km - I tell you some of them are steep! so much that I had my head down and nearly missed the 'knobby tree' 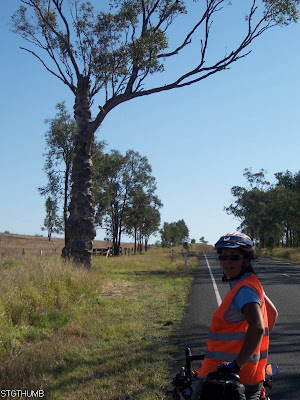 Once you are through the steep undulations you begin to climb and climb - not a steep climb just gradual but you know you are climbing so it wasn't too bad just long! At around the 21km mark you are at the top of the Binjour range and there is a really nice rest area up there with a great view of the area below. 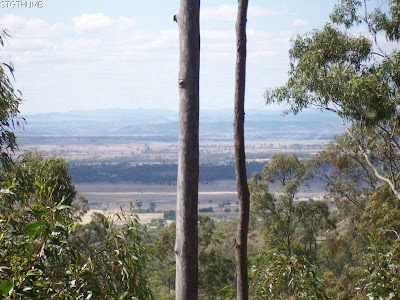 So we had a cuppa at this rest area before we started to go down. 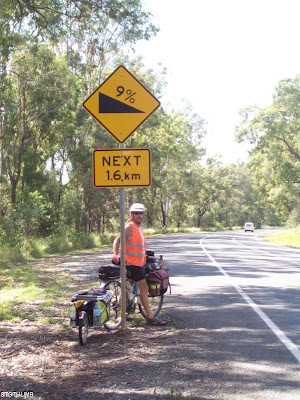 Lucky for us we only had the longer gradual climb rather than this steep little 'munter of a sooty grunter'!!!
I thought I would enjoy this down hill but half way down a spoke broke in my back wheel and it became severely buckled - I think I hit a rough spot in the road - I wasn't going too fast either - as I don't like going down steep inclines anymore since the accident - so I was doing around 23km per hour and I heard this very loud ping and pulled over and the wheel was rubbing against the frame of the bike. So we slowly went down to the guard rail and couldn't go any further and poor Neil had to fix it on a steep 9% decline with traffic (albeit not heavy) going by! 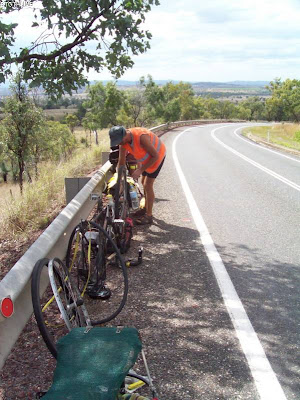 so here is Neil fixing away while I take photos and below is what Kouta does ... 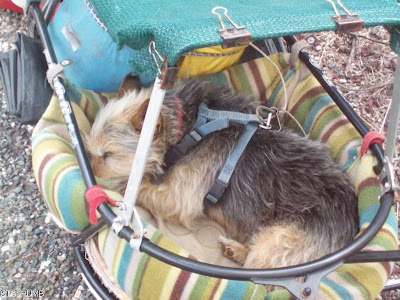 ... he has such a HARD life!!!
It took Neil around 1 hour to fix and while putting the tyre back on he saw that the sides were weak so he switched over to the spare tyre which should do to go home.
So we slowly and stressfully road the final 20km to Gayndah. We got here pretty late in the afternoon and passed the first campground and went to look at the Riverside CP and that looked really rough so we came back to the Manda Inn Motel and CP and it is alot nicer and chatting to someone in the park here - we made the right decision as the riverside CP is rough! The man was very friendly and only charged us $18 for a powered site. And the picking season (for all the fruit - more imaginery fruit!) ended last week so we are lucky as if we arrived last week we may not have got a spot!
The town has a foodworks and an IGA so we had a nice meal last night with fresh veges, chicken and noodles.
We are resting here today and Neil has managed to fix my back wheel so it only has a slight buckle and we will try and find another good rear wheel in the towns we are going too - remember this wheel is only a cheapy that we picked up in Longreach. 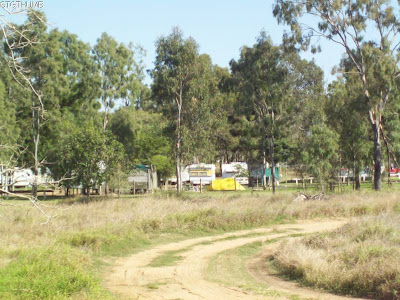 Above is a photo of our tent from the bridge that goes over the Burnett River - the photo doesn't make our campsite look too good - but it is a nice spot. 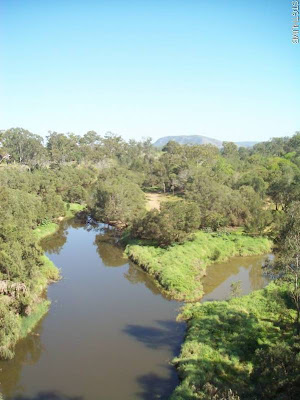 We walked into town to get more food supplies and this is taken from the bridge and is what remains of the Burnett River - I am sure it is huge when it rains around here as some of the trees are almost horizontal in places from where the water rushes through but for the moment it is very patchy and not flowing.
You know how things tend to happen in 3's? well yesterday my wheel spoke broke and buckled, the wheel kept moving as I rode and we had to keep adjusting it in the final 20kms and then to make my day even worse I broke my spork while spreading my peanut butter! 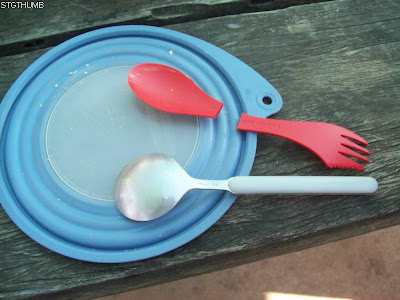 I was absolutely devasted - Neil kept saying I was going to break it whenever I went to eat peanut butter - but I thought he was only being nasty and saying that because he is so anti peanut butter but no it broke - so I now have a new metal spoon (we could only get them in 4's so I have kept 2) and now all he says is that the peanut butter will bend the spoon!!!
Tomorrow we make our way to Kingaroy and this afternoon Neil will ring around looking for a good wheel and we may have to divert to Toowoomba to get one as that is the only town that has a proper bike shop the rest are all sports and toyworlds!
Posted by Janet O'Brien at 11:20 AM