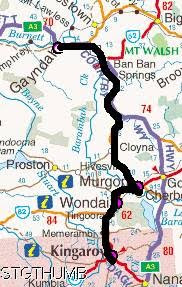 We had a good rest at Gayndah - it is a nice small town and for some strange reason Kouta is becoming very cantankerous ... we decided to walk to the IGA to get our shopping and the whole way there and back Kouta was very naughty and wanted to stop and waunder anywhere and everywhere so much that Neil got sick of it and cracked the 'poos' at him and so we had to cut our walk short and just get the food and walk back to camp ... I tell you there is nothing worse than walking with a stubborn dog that won't listen and a grumpy man!!!
The ride out of Gayndah is the usual undulating and at the edge of town they have the giant orange ... 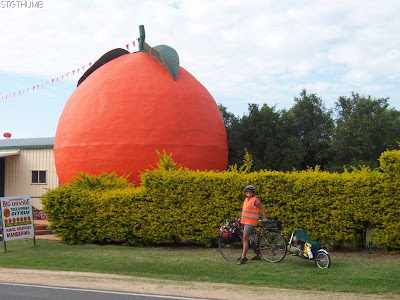 ... Neil couldn't help but comment that it was hard to distinguish between me and the orange since I was wearing the orange reflector vest!
So up and down we went until the road heads south which is about 10km north of Ban Ban Springs and then it flattens out a bit.
Along this road Neil saw a spiky lizard - not sure on its' official name. 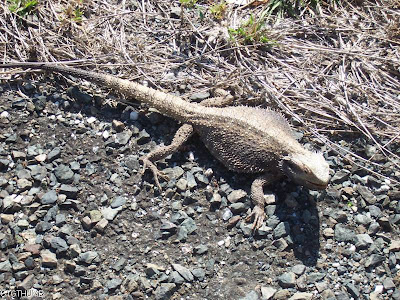 It was in the shoulder and I don't know how I missed it but Neil said that it is quite well camouflaged.
We had a cuppa at Ban Ban springs and picked up water there - the Camp 5 book said it had drinking water but the water in the tanks was very brown so we took it from the toilets which is okay if you boil it - so we used it to wash and have cuppas with it, otherwise we still had plenty of drinking water with us.
The ride 32km south to the junction to Goomeri and Murgon is very pretty and dry and is relatively flat (compared to the riding between Eidsvold and Gayndah). It had some hills but they tend to be long rolling hills but okay to ride.
The temperature became very hot and so by 60km I was beginning to feel it. Once at the crossroads we turned onto the Murgon Gayndah road which is a minor road and is a shorter road going to Murgon compared to via Goomeri. The start of the road is up and down and found a spot on the side of the road in amongst the burnt grass!
It is difficult to decide whether or not to pick this spot or continue on as you could be continuing on for a long time! So it wasn't the greatest spot but we had passed a farmer that had been burning off his paddock and the sides of the roads were done so we assumed that it continued for a while so we decided to stay put. By the time we set up the tent we were covered with black soot even though we were exceptionally careful not to tread in it too much ... in hindsight I don't think we will camp in the burnt areas again as by the time we got to Kingaroy we were just grimy and covered in black soot! 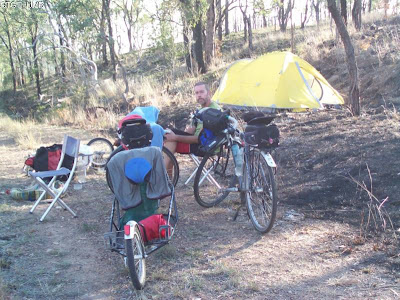 It was quite funny sitting there after we had packed up as a fair few cars tooted at us! We weren't in absolute full view but if you looked you could see us 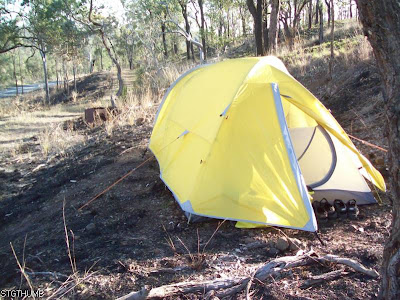 There was bits of unburnt areas around us so we walked there if we needed to get down to the track where the bikes were.
We listened to the Geelong vs. St Kilda game and were about to turn it off at half time depressed since Geelong wasn't going to good but I decided that I would listen to the 3rd quarter and by the end of it they were closing in on St Kilda and Neil decided that he would not go too sleep and since the reception is not too good way up here in Qld the radio kept phasing in and out so sometimes we missed an exciting part and in the last quarter Neil and I were nearly leaping out of the sleeping bags whooping and cheering when Ling got a goal and only to be deflated when a free kick was played against Geelong and so the goal wasn't allowed and a few minutes later the game ended and we both went to sleep depressed!
We woke the next morning still upset over losing and reevaluated the game like we were the coaches and hoped like hell that Hawthorn lost to Fremantle today!
We packed up carefully again trying not to get too dirty and left the campspot at 7.40am and were initially only going to go to Murgon which was 40km away but we had a strong tailwind and got to Murgon around 11am.
I was relieved to actually get off this minor road as I thought it would be quieter but the trucks took this road to cut out Goomeri and by doing this the road is very rough in places. It certainly is a scenic road with a few localities along it but just too rough for the bike - definitely up and down.
It was a very cloudy day and it looked like rain but we thought that it is still early at Murgon and we had a tailwind and the terrain didn't look all that bad so we continued on to Kingaroy and would take an extra rest day there since we can't do anything to the back wheel until Monday so we set off.
From Murgon we hooked up to the Bunya highway and it is basically up out of Murgon and down into Wondai and the local traffic was very busy and we couldn't figure out why until we got to Wondai and saw that the local soccer was on with small kids games so that is probably where everyone is going! After Wondai you start climbing to the small locality of Tingoora and it is a 8km gradual climb and then about 3km along to Wooroolin you begin to descend a little bit. From Wooroolin it is another 17km to Kingaroy - although it is very cloudy with the threat of rain it is still very warm and windy so the sweat was pouring off me! You can still feel yourself climbing gradually and then there is a small climb before Kingaroy and then a lovely down hill down into Kingaroy which is at 430m above sea level hence why all the climbing - I think Gayndah is at 120m above sealevel. Just out off Kingaroy towards Dalby is the continental divide which we will be going over on Tuesday hoping the bike wheel is done by then!
The campgrounds here at Kingaroy don't take dogs so we have come to the showgrounds - most major towns have a campground at the showgrounds and this is the first time we have actually camped in one and we have a powered spot since it is not that much more expensive than unpowered and we set up tent and Neil went in to get some food for dinner before all the shops closed (remember they close up on Saturday afternoons except major supermarkets and don't open on Sunday unless it is a big IGA).
Neil came back all smiles and we had a 1/2 price cooked chicken and bread for dinner ... but that is not why he was all smiles - he bought a light for the tent. A few days ago the solar light had died on us and we knew we wouldn't be able to get another not in these small towns (in fact we got it from Bunnings and we haven't seen one since Townsville so we assume we won't see one until Melbourne!!!) Anyway we have this hanging camping light that requires power (hence the powered site for the light and computer - next we will be getting a kettle and toaster!) and I tell you it is a bright light. 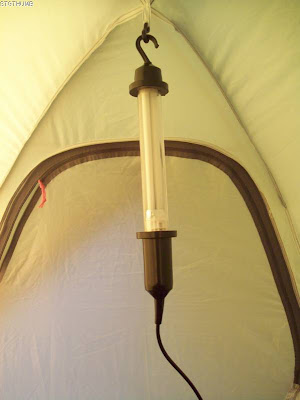 This is it and when I went to the toilet last night I looked back to the tent and saw that it was bright and lit up compared to the other caravans in the park which tend to subdue their lights whereas our little bright yellow tent looked like the sun! In fact in the tent it is a bit like daylight - but it is great as we had a late dinner and were able to put the light on in the tent and it lit up outside where we were having dinner since it gets dark here at 6pm and it will be a while before daylight savings. 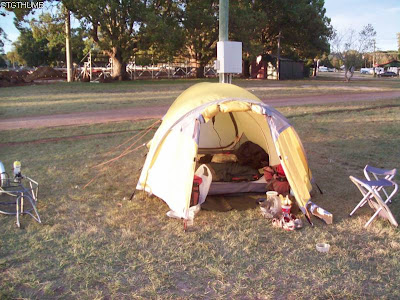 Above is our camp spot near a shelter in case the forecasted rain is too much for us so we can duck into the shelter but there is plenty of room for Kouta to run around but looking across my shoulder now all he does in these rest days is sleep ... on my thermarest!
Last night it rained and there is another band of rain coming but the tent is pretty good and Neil has put dirt around the tent so that when the water runs off the fly the water doesn't splash back onto the inner tent.
Posted by Janet O'Brien at 8:48 AM