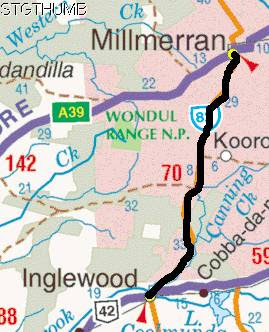 Before I tell you about our ride to Inglewood let me show you a few rest day photos from Millmerran -
Below is a photo of Kouta thoroughly enjoying his day off! 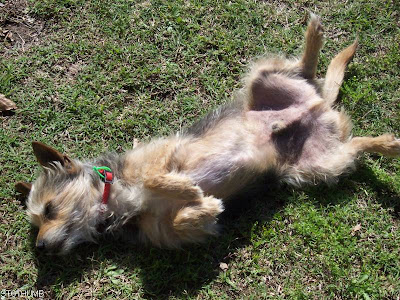 Not sure if he is trying to work on his suntan on his belly!
Also during the morning he had a few friends come and visit - 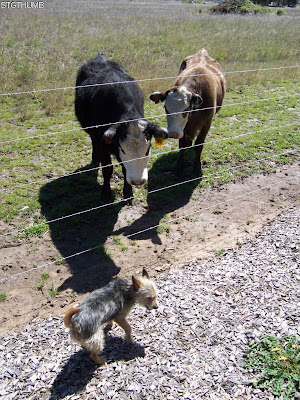 the one on the left (black one) is Jess and the one on the right (brown one) is Brett - they had name tags on their ears. I think they came over to see Kouta and were very curious about him but Kouta just smelt them and thought "yeah whatever"!!! 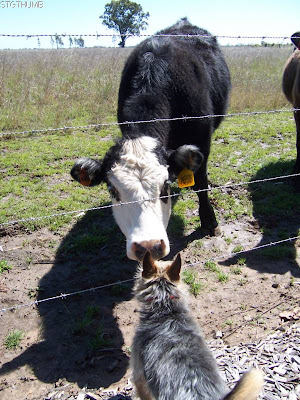 Jess was very interested in him and kept trying to poke her head through the wire but eventually Kouta got bored with them and trotted off back to the tent.
Later on in the evening we went on a walk around 'downtown' Millmerran and it is a reasonable size town with alot of 'hoons' driving around - lucky we are not in a rest area near this town (not that there is any!). Along the way we saw more murals like that at Cecil Plains but this one on the side of some transport company building - I had to take the photo in 2 halves. 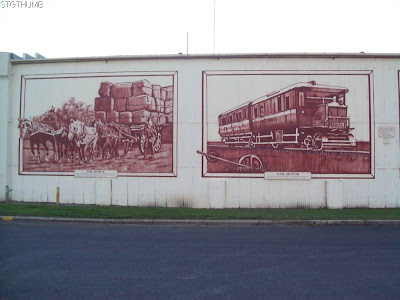 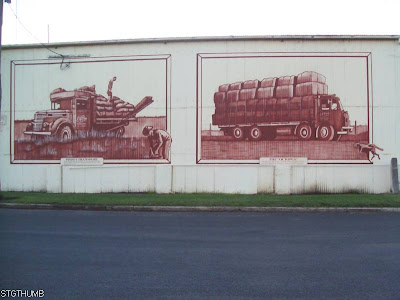 they are quite well done and there is another one on the Foodworks building but by the time we got to that one it was too dark!
The ride from Millmerran to Inglewood was quite a good one and we left around the usual 8am and it was a bright clear sunny day and we were luck enough to have a tailwind and in the end it was alot stronger than what we had read on Elders.
There is a gentle climb out of Millmerran and being a Sunday the traffic is practically nonexistent in town! As you pass the Millmerran power station the road for some strange reason becomes windy for 4km (the sign says so!) and then straight after that it is 7km of undulations. 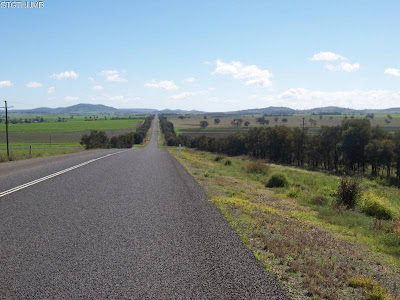 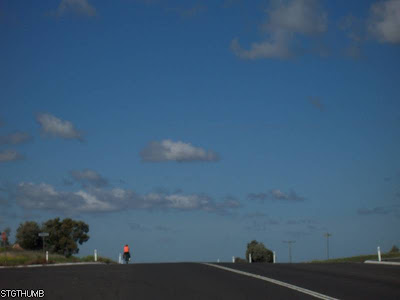 ... Neil decided to take a photo just before the top of the undulations but I was to eager to get over and see what was ahead of us ... 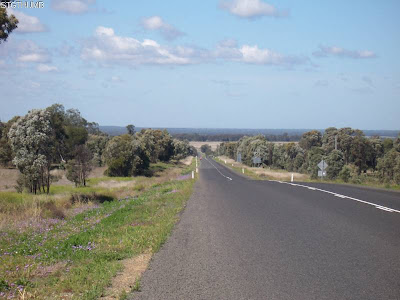 ... well ahead of us was a very nice long gradual downhill and you can't quite see me but I am the dot on the left side of the road - it was a real beauty going down this undulation as the road surface was lovely and had NO potholes or rough surface so I let it fly down this hill which is unusual for me as I tend to ride the brakes because the road is always full of pot holes and can be lumpy and bumpy in places but since it wasn't I managed to hit 49km per hour at one point near the bottom of the undulation!
For the rest of the way to Inglewood it was relatively flat and the wind was very strong and we managed to cruise along at 20km per hour and made good timing. We stopped for a cuppa around the 38km mark and came across this tortise in the truck pull over area. 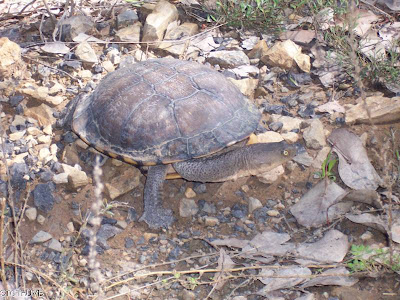 The traffic along this road is very light for a Sunday and I reckon about a total of 10 cars, trucks, caravans and vans passed us all day - it was fabulous riding. 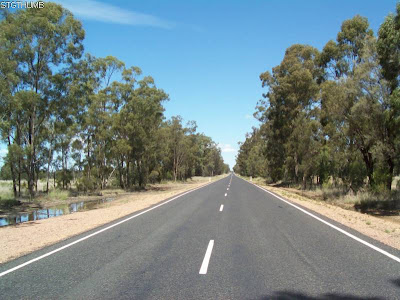 Most of the road is surrounded by scrubby trees as there is a state forest either side of the road mixed in with pastoral land. But plenty of spots to bush camp should we want to!
As we got closer to Inglewood we came across this farm that had a paddock of purple flowers (Pattersons' curse) and a little further on a field of Daisies which Neil liked! 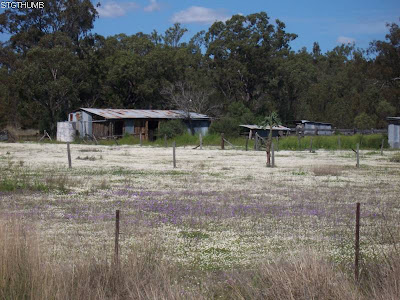 From a distance it looks like white gravel in the yard but as you get closer it is actually daisies!
We got to Inglewood just before 1pm so it took us less than 5 hours with breaks to do 70km which is pretty good going.
It is a Sunday and off course everything is closed here in Inglewood but it looks like a relatively big town - the caravan park (Spur-H) is small and unique! Most of them are permanents and I don't think a tourist has stopped here in years judging by the reception we received from them and definitely NO cyclist has passed through here either!
We set up tent and one offered his table and chairs since they saw that we used Neils trailer as our table. but we declined then another came over with a foldup table and let us use that - so we are using it at the moment - so they are very friendly and curious about us!
Across the road is a Shell gas station so Neil ducked over and got some hot chips for a 'chip butty' and 2 very greasy potato cakes so that was lovely having that for lunch (don't worry we hardly ever have takeaway greasy food) but since we haven't had it in such a while I thought I would never say this but IT WAS DELICIOUS!!!
Tomorrow we head for Texas which is near the border.
Posted by Janet O'Brien at 2:34 PM