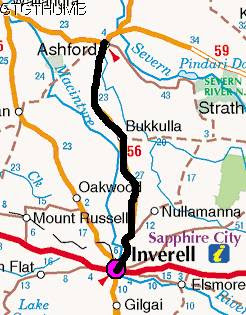 Last night we went for a walk around the town of Ashford and it is small to say the least - has alot of old shops but the majority are all empty! Just north of the town is a National park and also the Ashford power station and coalmine - so suspect the majority of townees work at the power station or coalmine. 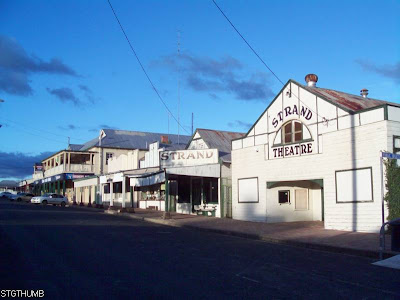 It has a lovely feel to the town and it is a shame that there is very little through traffic.
It was a cool night and we thought there might be a frost when we woke but there wasn't. We couldn't do our new routine of Neil packing his trailer while I made brekky as we use his trailer as our table - so it only works if we have a camp table! But the neighbour next to the caravan park has chickens and a rooster that I think started crowing at about 3am in the morning so I drifted in and out of sleep until around 5.30am with the rooster crowing every now and then so we got up earlier than normal and we still managed to get away by 7.30am! It was good to get some kms' done with no wind.
We knew that most of the ride would be up hill and we were right. The first 14km is basically up! 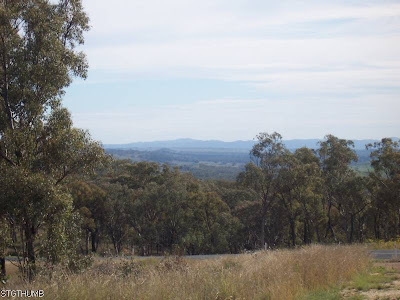 This is the view from the top of the first climb - from this point you are on another tablelands and the going is a gradual up hill - so the gradient is quite nice and ridable. It was a lovely sunny day with a few high clouds but as the day wore on the clouds were forming (but not rain clouds) so that once in the shade it was very cool. We heard this morning that Inverell was going to be a high of 17 - which is quite cool for us but we expected it.
The last 20kms to Inverell were difficult very undulating with some sharp climbs - although the legs coped okay I found my wrists were sore again - the wind by now was quite strong and coming at us from the head and side so again I was blown all over the place and struggled to keep the bike straight! But we got here in the end. One thing I forgot about NSW roads is that they are the pits. This is a minor road and by crikey the road was atrocious along the edges so you were forced to ride the middle of the lane and going down a hill at speed was a big risk as you didn't know just what the state of the road was so I went down very slowly in places! But when we crossed the border yesterday the first difference I noticed (apart from the poor roads in NSW) and that was 'safety' along the road side. Basically in Queensland there is no safety with regards to the road crossing over a bridge or drain - they are open where as in NSW if the road goes over a drain that runs under the road they either have bollards up or a metal guard to prevent you from going in should you run of the road ... in Queensland they have nothing and like you to run into the creek!!! Also the bridges - before and after the bridges in NSW they have metal guards up ... in Queensland they have nothing!
The campgrounds in NSW are more safety conscience - they don't have slippery paths, they have more toilets and showers in a block per campground (last night there was 4 showers to around 20 women) whereas in Queensland they will have 2 showers per 50 women!!! I am not joking!
So we are glad to be in NSW and although we have chosen a somewhat hilly way through here we seem more fitter and stronger to cope with the hill climbing. We are staying at the Showgrounds as it is only $12.50 for a powered site and since the game is on tomorrow we wanted to get a powered site - the campground up the road charges $25 for a powered site so although there is no camp kitchen but it is not worth paying an extra $12.50.
Posted by Janet O'Brien at 2:42 PM