Well we missed a few days due to bush camping and no reception!
We left chilly (pronounced "chully" in my accent) Warburton on Saturday morning and it took us nearly 3 hours to have breakfast and pack up ... are we sounding a bit like Phil? anyway it was a quick ride back to Yarra Junction to pick up supplies as we knew we were going to bush camp that night. We picked up the C425 road to Powelltown which is 16km from Yarra Junction ... lovely country through there, somewhat rolling with hills but rideable. We had a nice spot for Lunch in Powelltown as there is a rest area with tables and a pit toilet (called an environmental toilet ... less smell!). Moving on towards Nojee just 1km out of Powelltown we start to climb for about 5km. Now going up a hill with a trailer in tow is alot different to going up a hill with loaded saddle bags ... I think it is because with loaded bags the weight is centered around your legs and mass whereas the trailer drags behind you so you really use your lowest gears but in saying that when you go down a hill or incline you pick up speed incredibly quickly ... just ask Kouta who I am sure was barking out 'mush' (spelling?) to me yesterday when we 'hooned' down some inclines!
Anyway going through c425 is hilly but okay, I don't think there is a single piece of flat road! 14km on from Powelltown we hit the Ada road turnoff which is where out bush camp site is. It is about 400m off the main road. It is a very primitive campsite used by 4wd drivers and trail bikers so being the weekend it was well patronised but they were courteous even when we were cycling during the day the general traffic was good.
Below is a photo of our campsite. 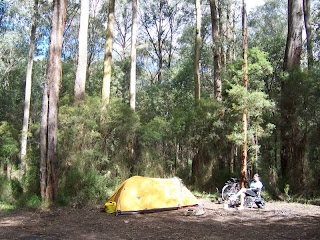 The pit toilet was too far away for me to walk and it was near a couple of weird people! So I used the bush and believe it or not while I was ... you know! ... a LEACH must have crawled on my leg and attached itself to me, so here it was sucking away and I had no idea until I went to bed and saw it there! ... ew yuck ... lucky Neil knew what to do and we lit a match and it let go and I quickly squashed it ... I had no idea there were leaches here ... we are not in the Amazon! I could embellish it more by saying the leach was huge ... but I am not it was about a centimeter long!
Anyhow below is a photo of Neil utilising the BOB trailer as a table - just flip it upside down and place jandals to level it and there you have it our very own handy table! 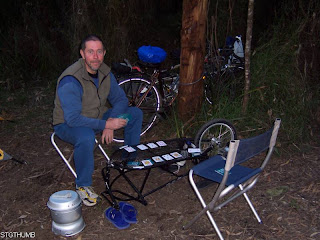 After a good nites sleep we got up to a nice crisp morning (not as cold as Warburton!) and again took around 3 hours to have brekky and pack up ... we really are sounding like Phil aren't we! Anyhow just 4km down the road was a turnoff to head to Neerim or you could continue on towards Noojee and turnoff just before there ... but which ever road you take ... the only way is UP!!! I would say the climb we did on a quieter road to Nayook was around 5km and on our way up we were so slow and quiet that even the birds didn't flinch and fly away as we appoached them! Just look how close we got to this bird below as it watched as crawl on by! 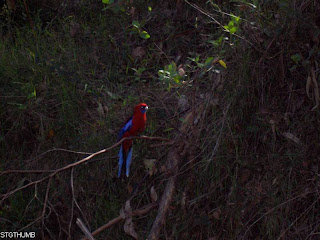 but once at the top (at least I thought it was the top I still managed a smile! 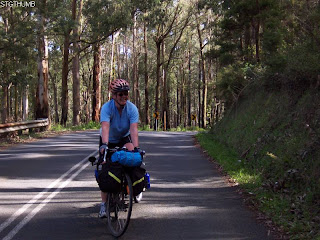 From Nayook all the way to here at Warragul it is up and down, you are either climbing or going down a hill! Perfect beautiful country though at bit like the North Island of NZ! and while we are going up a hill very slowly we could get the time to look in the distance to see where the fires had been and I have to admit it is a rather eery feeling looking at the hills now as the trees are still there but with no foliage so you can see right through them - the trees are just a silouette. Lunch was at Neerim South - a well populated and friendly town that I think probably would get alot of its' business in Winter from Mt Baw Baw, which I think we saw with only a little bit of snow on it.
43km later we reach the 'bigger than I thought' town of Warragul, we approached it from the north where there is alot of new housing so I would say the town is expanding.
Here at the campground in Warragul, which I have to say is excellent, we are having a rest day to let the legs recover from all the hill climbing. It cost us $24 to camp for 2 each night and the showers are included, there is a fab camp kitchen that is covered with free BBQ's, fridge, toaster and jug ... just brilliant.
We had sausages last night on the BBQ and Jenny from work gave me a BBQ silicone mat to use on a BBQ so you don't have to clean, well neil had his doubts but he loves it now ... it is really handy to have, so simple to just place it on a BBQ, cook without oil and then just wipe clean!
Tomorrow we are in a roadside stop just north of Taralgon at a place called Tyers so not sure if we will get reception but until then we hope everyone is well!
Posted by Janet O'Brien at 11:33 AM