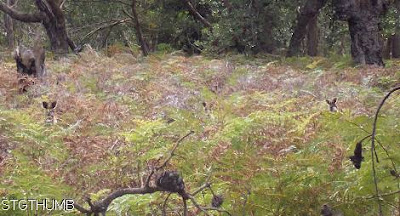 We went Koala hunting today at Raymond Island which is a free and about a 2 min ferry ride from Paynesville. We were able to take the dog so we thought we would look at the island from the bikes with Kouta in tow.
Raymond Island has a few 'exclusive houses' and also some older style boat houses and I think it is quite a trendy place to have a holiday home. Personally I would love to have a house there especially if you have a tree with a Koala in it at no extra cost!!!! How fantastic would that be, the first koala we spotted was in a tree just outside someones house! I spotted the first and Neil spotted the next 10 koalas, after that we resorted to looking for kangaroo spotting which I thought would be easy but they were all hiding in low lying scrub and lucky Neil had is 'tracking wildlife' outfit on as he spotted 3 sets of Kangaroo ears! On the top photograph can you spot the 3 Kangaroos?
Nice island for nature and we saw heaps of birds - I have never in my life heard so many Kookaburras or Cockatoos since I left Melbourne they are really loud out here in the bush and country.
We also spotted (I really should say Neil spotted) 2 galahs feeding their young ones in their nest and we managed to get a pretty good photo of it. Neil also documented nearly all 11 koalas we spotted (just in case they are needed for tagging reasons?!!!) 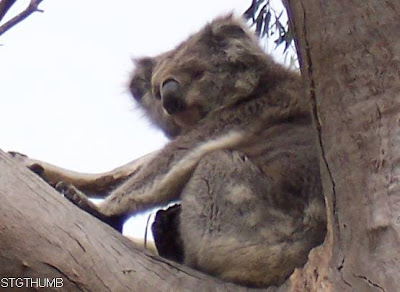 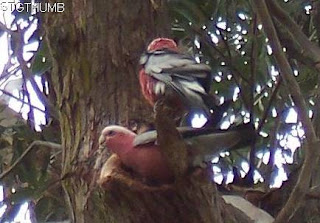 Tonight we are going down to the town center to have 'fush 'n' chups' for dinner and we will eat it somewhere along the beach even though it will be freezing but the scenery is lovely. Besides it means we will be able to escape the relentless mosquitoes that are hanging around here. Which is common in October and apparently the first hot day they will disappear.
Tomorrow we head into Bairnsdale to start the East Gippsland Rail Trail.
Posted by Janet O'Brien at 3:57 PM