Bruthen to West of Ensay 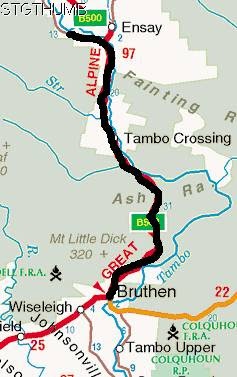 We woke up this morning to a very sunny and crisp clear morning. We sort of knew that the next 4 days of cycling were going to be hard especially the climb up to Mt Hotham but I suppose everyone concentrates just on the Mt Hotham climb and forgets that we actually have to get to the base of the climb which is at Omeo ... well it is one hell of a slog just to get to Omeo itself!
There is a 16km climb up Mt Elizabeth (900 odd meters above sea level) and the photo below shows me climbing. 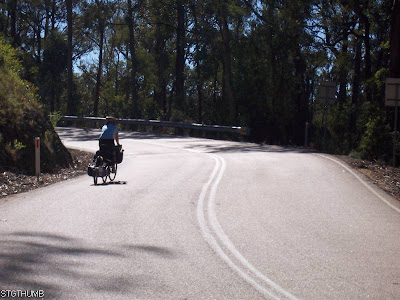 After a 8km downhill we meet up with the Tambo river which we follow for the rest of the day and a bit of the next. By the time we got down to the river it was around 10 oclock and the sun was particularly warm and the road followed the river and there wasn't a flat piece of road all day it was short sharp undulating hills ... it was just up and down and up and down and over the km's it just wore me down (Neil was okay as per usual!).
Along the way we met a german touring cyclist going the opposite way to us and I tell you she was a very strong cyclist and was doing some outrageous distances basically for that day she was going from Omeo to Bairnsdale and over the following 2 days she was going to make Melbourne! CRAZY I thought! She is the 6th touring cyclist we had met - the first was a Japanese guy at Taralgon, a Japanese couple at Orbost (both lots were going from Perth to Sydney following the A1 all the way), another couple (American) we met out of Orbost also going over Mt Hotham and then this German woman. Yes there are always alot of crazy people out there just like us.
Anyway back to going up and down continuously it sort of drains you a bit cycling like that and in the end I decided that I wouldn't be able to make Swifts creek (75km of hills is not my idea of a holiday!) so I spat the dummy and said I am not doing it and just before Ensay there was a little quite road that we followed and at the 60km mark we found a beautiful bush campsite so I said this is it for me!!!! 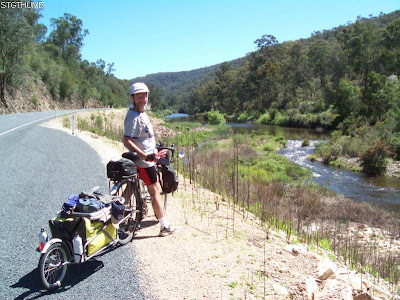 Neil with the raging Tambo river! 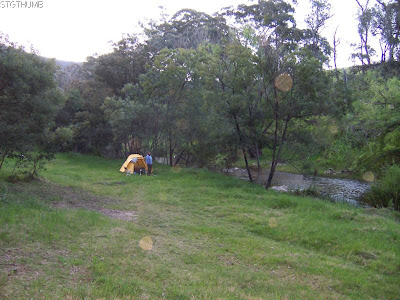 Our bush camp for the night! simply gorgeous and quite with the river flowing and in the evening the frogs croaking (which croaked all night very loudly and woke me up quite a few times!)
After dinner of baked beans and spaghetti (mmm yum!) we were just sitting there enjoying the peace and quiet (ironic really as our life is always peace and quiet without kids so appreciating the quietness makes no sense really!) well more enjoying the tranquility of nature and just across the river a fox trots along and realises that we are there and bounds off and then a wallaby bounds along sees us and thinks oh who and what the hell are they! So for at least an hour we waited very quietly (very difficult to do when you have had alot of dried dates and apricots ... lets just say there was alot of thunder that night but no rain!!!) wishing and hoping this wallably makes its way down to the river and finally it did! 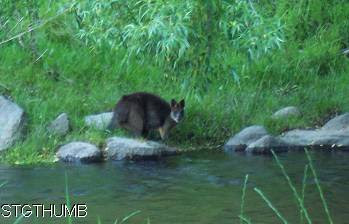 We were over the moon that it finally made it and it was better than watching TV. Gotta love nature.
Posted by Janet O'Brien at 10:41 AM