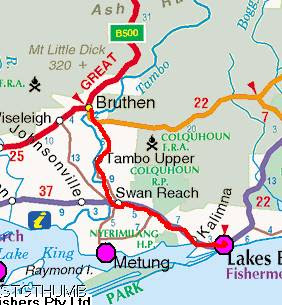 Today was a nice easy day for us just a short ride up to Bruthen from Lakes Entrance. Tomorrow we will be taking the Alpine Road and we will be going through some very hilly country. So rather than do long arduous days and get to Bright by the end of the week, we decided to do smaller days and enjoy it more!!!
So we took a series of roads to get to Bruthen (we were here a week ago!) first we took the A! and climbed out of Lakes Entrance which I think is a nice town this time of the year but I would imagine it would be very busy during the xmas and summer break and even this long weekend (Melbourne cup) so we are glad not to be there then, mind you we should hit Bright on Sunday and that town is booked out entirely so hopefully they will still have room for us in the unpowered sites!
At Swan Reach we took the C605 for around 5km and then we linked up to the rail trail that we did the other day. As soon as we hit the trail we took Kouta out of the trailer and let him run along side of us as we pedal along, now I am not too sure how he took it, personally I think he was a little put out that he had to walk! I tell you that dog is becoming more and more "human like" since he has been with us on this trip (at least it is better than Neil and I becoming more and more "dog like"!!!) 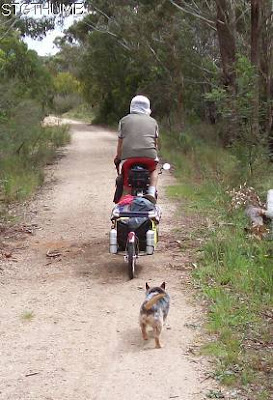 It is very windy today and we hope it will be with us tomorrow as we head north so then it will be a tailwind! But in saying that it is cold. So if the legs will allow us we will try for Swifts Creek tomorrow and if they fail us we will bushcamp about 5km south of Ensay.
Posted by Janet O'Brien at 10:34 AM