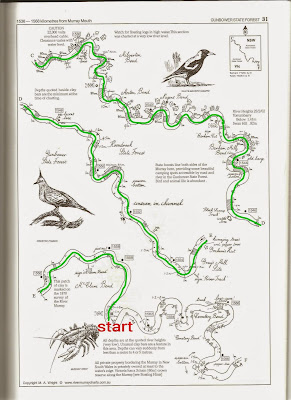 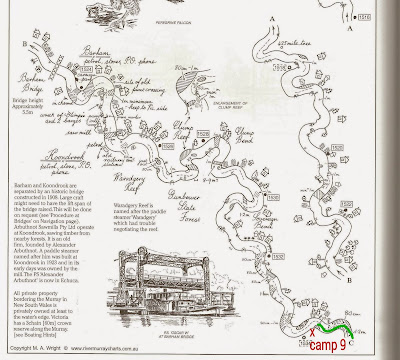 We woke to a very bright sunny day that I just had to take a photo of it - so please excuse the glare!
You know after our little bonfire last night we both hopped into bed complaining that our clothes stink of smoke and then this morning when Neil blew his nose on the hanky that was drying yesterday he again began complaining that it stunk of smoke and I also added to his complaints and complained that my shorts stunk of smoke when I put them on so we had a merry ole morning complaining like hell!!! 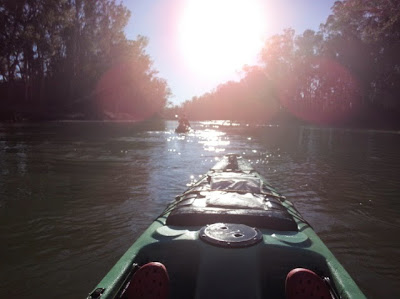 This is our 5th day kayaking and I thought the arms are not going to make it but we surprised ourselves and felt fine.  Today there was hardly any wind out on the water so you could take advantage of the river flow.  There have been at times when we have paddled along a sudden lurch in the kayaks and all of a sudden you veer left or right and you quickly have to put your feet on the rudders to straighten up again.  It has only happened once or twice so far on this trip and I put it down to some massive Murray Cod playing funny buggers with us and it is swiping our rudder as it swishes past us!  But now today it happened alot and there was considerable under tow in this river - you can see these unexplained swirls ahead of you and you can't go around them and when you go through them that make you go left and right and you have to be careful as they are very strong and can make you veer over to some snags once or twice saw me scrambling on the paddles to get away from the impending snags!
So not alot was to be seen today, we did come across this hut and according to our map it is Grahams Hut which is on the old site of Grays' mill 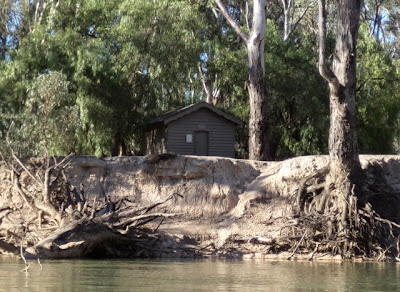 As we get closer to Barham there are one or two more houses (which we haven"t seen since Torrumbarry weir!) and also alot more pumps coming out of the water and today we saw this channel diversion of sorts 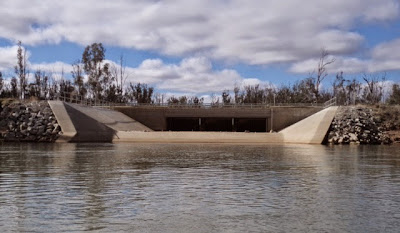 I think they maybe waiting a while for water!  It is not new as it is shown on our map that was done 13 years ago but it has been refurbished.
So coming along we remember that it is Friday and the weekend is meant to be nice along here and our goal is to get to 1538km and as we approach we realise that we may be competing for campsite and what do you know every man and his dog is out here so we had to keep going.  We were having trouble finding a spot on the Victorian side as it is still the Gunbower Island and it has a dirt road running alongside the river and over the past few nights that has been okay to camp next to but tonight that road is like  a damn highway so we don't want to camp alongside of it.  We try 3 places and all are failures so we reside to the fact that we might have to continue on to Barham which is another 10km on and we both felt we could do it but in the end we didn't need to do it as we found this spot which was just off a road that has been blocked by piles of gravel as there are quite a few ruts in the road to be repaired so we think that no one will be  next to us and the main road is just off us about 50m and no one can see us as there is alot of small scrub around.
So we are exhausted and soon set up camp.  I have been meaning to take a photo of our table ... 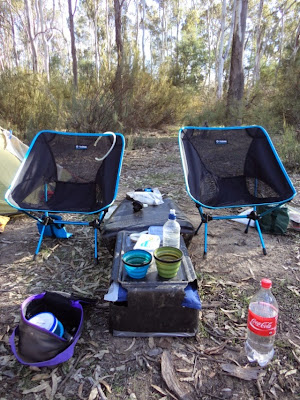 we have resorted to turning Koutas plastic container that he sits in in the kayak and that becomes our main table with my black front container as the secondary table as it is not the most stable container (it doesn't have a flat bottom) but it is okay to put things on it that won't spill - ie. cups of tea and coffee are no good for it but bowls of curry and cereal are okay!  Here is our campsite ... 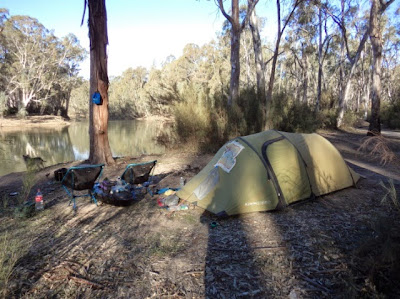