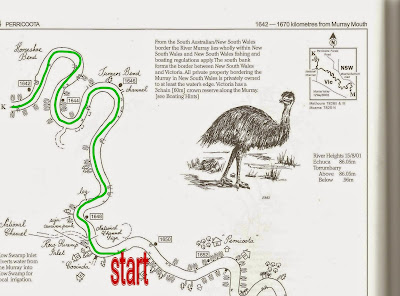 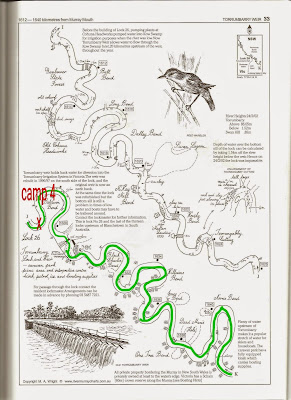 As you can see we had a rest day yesterday due to very strong north west winds up to 25km per hour and gusts well over 50km an hour and also heavy showers in the morning so we decided to have a rest day (the arms welcomed that!) and I was so tired that while lying in the tent listening to the wind and rain I fell asleep at 11am - I never fall back asleep in the morning usually if I was to fall asleep it would be in the afternoon.
So after lunch the weather broke and the grey clouds broke up to let the sunshine through so out came all the solar panels to charge up - while there wasn't alot of sun it was enough that we could read our books tonight!  We have had 3 days of no sun so the battery packs were getting low.
I also managed to wash some clothes as the wind was still blowing they soon dried quickly.

Monday 11 May
we woke to a lovely morning - the wind is still blowing but has swung around to a south westerly.  The clouds have broken and there looks like more blue than grey skies this morning.

Packing up this morning we noticed Kouta seems to be a bit more receptive to moving on in the kayaks today - first he went up to the kayaks and sniffed them and also all the gear as we packed them up then we knew he was back to his old self when he began to follow us around like he does when we are cycling - he follows us to remind us that we are not to forget him and leave him behind ... to really emphasise this point he makes a point of using my life jacket as a sleeping mat and my chair as a pillow - by lying on my life jacket he knows that I won't forget him! 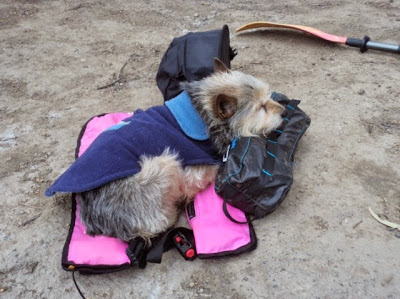 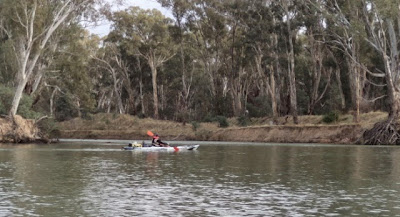 and here I am a rare photo of me 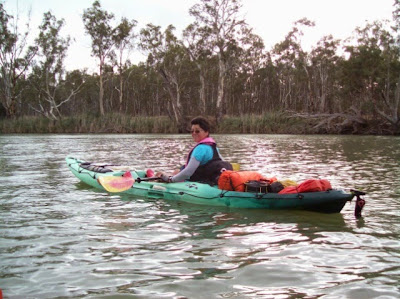 Now Neil is a lot better than I am at spotting wildlife - especially birds.  the other day Neil said he saw a kingfisher but they are so small for me that I always miss them but this morning there was one sitting on one of the snags just waiting for me to take a photo and I have to admit I am really happy with this photo ... 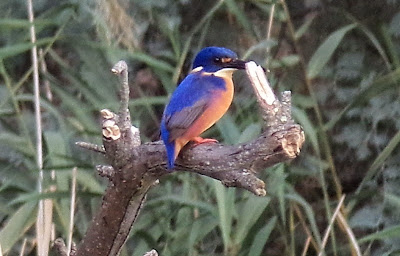 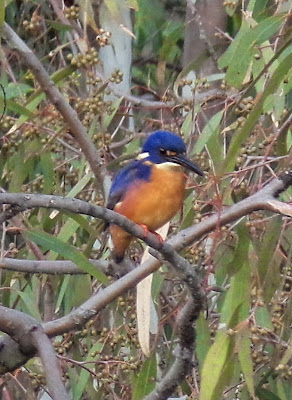 isn't it the brightest blue and orange - it is such a pretty wee bird.
We saw another one this time on the NSW side just around the corner.
Looking at the map today the bulk of the day will be going north west which is good as the wind will be behind us on some parts and we can shelter from other parts when the wind blows - our only hard parts are the bends - they are always exposed to the wind.  We hardly see anyone now - mainly the odd fishing boats but no house boats for the past 3 days. 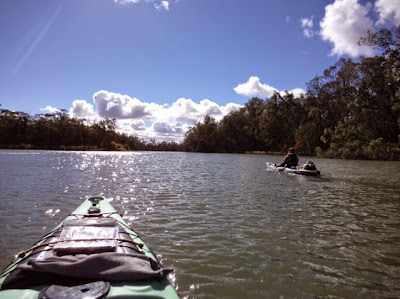 as you can see it is a wide river now and there is no river flow as the weir is only about 20km away and there hasn't been any flow for the past 2 days.
There is plenty of sun this morning and you can see I am basking in the sun! 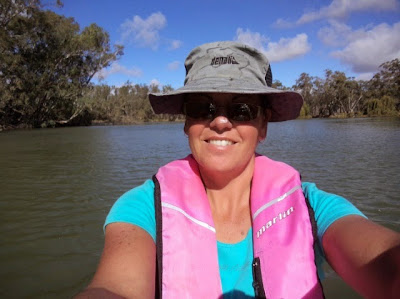 We were making good timing and our lunch spot is quite nice and sheltered from the wind - even Kouta loved the fact that we were in the sun and there was very little wind.  We are seeing a few more willow trees now, not alot but they tend to grow in groups but they are relatively small compared to the gum trees. 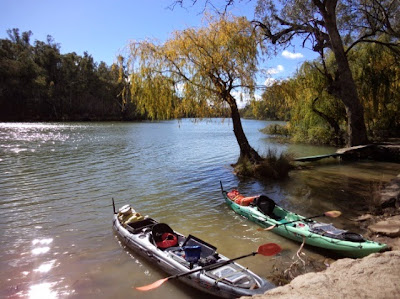 Our lunch spot was about 2km before the weir and we decided that we would go through the weir if they would open it for us.
We get to the weir and our sun has disappeared so Neil tracked down the Weir Master and they say there should be enough water for us to go through.
Now no matter how much Neil describe what this weir is I could not get my head around what was going to happen - this is his description - you go into a lock and the water drops and you paddle out and right next to it is the dam wall sort off!!!!
What the heck is he going on about. 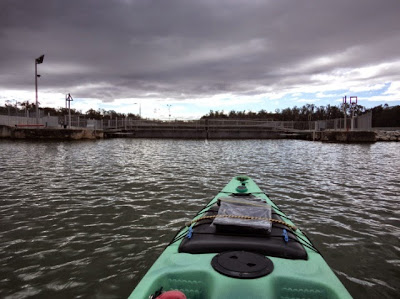 they open enough for us to go through 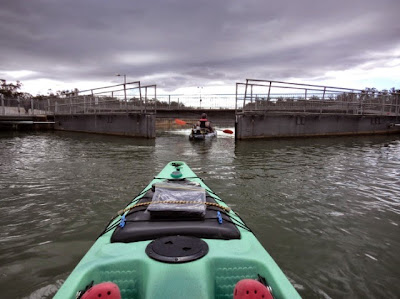 just after you go through the lock doors you have to duck to go under the foot bridge - they didn't bother raising those since we could go under - but hell I had to kiss my knees to get under it - it was low! 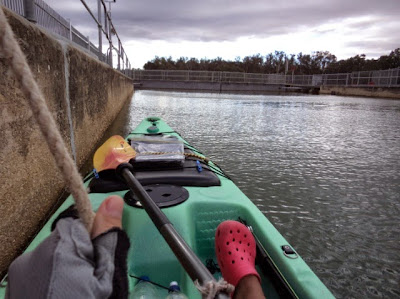 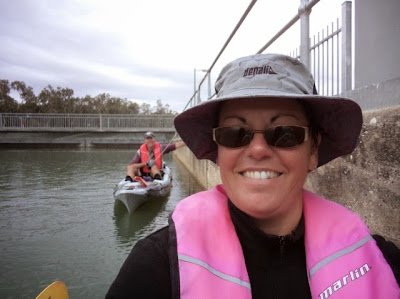 meanwhile the lock master is above us chatting away and explains what will happen for some strange reason I think the doors will open and we will just drop! but no the water is drained beneath us.  I have this all on a movie and it is great to watch.
If you look back to the last photo - we are at the top of the concrete wall, as the water drains beneath us we go down with it, as it is draining you are suppose to let the rope in your hand slide through but some times I would swing out and hold on for dear life to pull myself back to the wall!
once the water has drained beneath us we have dropped about 10m from our starting point at the top of the concrete wall, the doors are then opened and all the water is swirling and the valves so to speak are roaring with water and I am still clinging on to dear life not wanting to let go - I can imagine that if I did let go it would be like going down a plug hole!
alas I had to release and paddle out through the doors - it is at this point where the doors are it is only 120mm deep for us to go over as when Neil asked them to open it they thought there might not be enough water for us but 120mm is enough for the kayaks - not for house boats or boats!

I had so much adrenaline and enjoyed it so much that I was willing to paddle to the next lock where ever it might be - although this is lock 26 I don't think all are inoperation and all are not as big as this one!
So we come out of the lock and paddle down stream a bit and I turn to get this photo 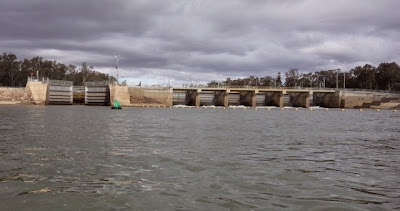 From here the flow of the river is swift so we are moving along. 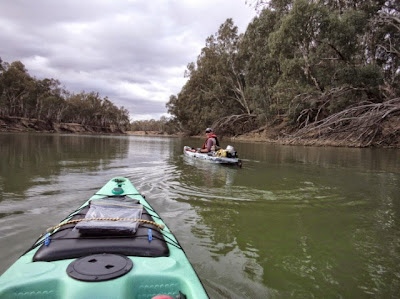 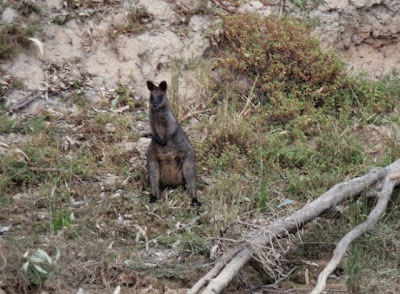 and he/she didn't seem to be phased by us what so ever, usually they bound off but this one just sat and watched us!
It wasn't long until we came across a campspot - this time on the NSW side and the 1626km marker is just around the corner.

We are very close to the waters edge as there is a legde where we can put the tent and the embankment is just behind us. 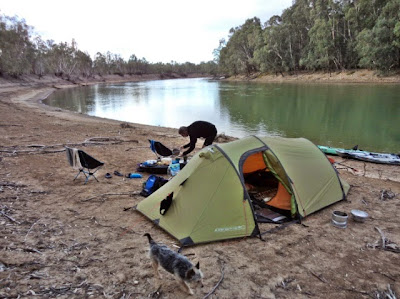 so tomorrow we hope to do a little more as we now have the assistance of the river flow and it is swift and we are also hoping for less wind as well.
Today we were happy with our progress and the arms were no where near as tired as our previous days - I was glad of a rest day yesterday to let the arms recover.
We are about 102km from Koondrook, Neil is hoping we can do it in 4 days at 25km per day so really it is only an extra few kilometers more than today.
I have to point out it is day 5 without a shower! the river water is cold but okay to wash in!
Posted by Janet O'Brien at 6:11 PM