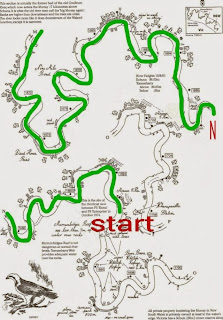 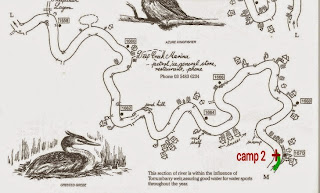 Woo hoo we have kayaked a grand total of 42km and the shoulders and neck muscle (Trapezius to be exact) were aching by the end of the day!
It wasn't cold this morning - around 7 degrees and cloudy.  We got up at 7am after a wake up call by the local Kookaburras at around 6.30 and then a big group of Cockatoos around 6.45am.  It was lovely sitting there eating brekky and watching the calm flow of the river pass by us.
We managed to head off around 9am and barely got out into the flow of the river when Neil spots something on the other side of the river so naturally he has to go over and investigate ... for some reason I didn't think road kill would be an issue on this trip but you all know Neil - in fact we will now call it river kill ... this is what he spotted ...

it is something you tow behind your boat - some floating thing ... we did think that maybe Kouta might like it to be towed behind the kayak just like on the bike!
He didn't want to get in this morning and ran away when he realised that he too has to go in the kayak!
So being the optimist we are we decided to rig up the solar panels on the kayaks ... 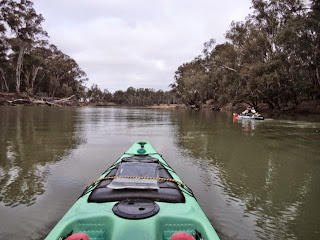 it is in a snap lock bag but as you can see from the photo it is a very grey cloudy day and it stayed like that all day.
Just up around the bend was a massive rest area on the NSW side and it has a tiered retaining wall and also toilets with a rain water tank so we stopped and filled up the bladders with water from a very slow tap coming out of the tank!
Not too many river boats passing us either way today, so we felt as though we had the river to ourselves.   The arms felt a little tight this morning but up to lunch they were okay - a little weary but still okay to paddle.
Lunch was in a very windy spot but it was a lovely beach around 1680.  Once finished the wind must have been watching us as it really blew as we left the spot and unfortunately for us the river was going straight into it.  Earlier this morning we found some old polystyrene at our camp spot and I have a problem of the water when there are waves (generally when going into the wind the river becomes very choppy) the kayak bounces and water splashes up where the handle is (my handle is rigid whereas Neils is a material one) and it splashes up and into the boat hence I end up sitting in a puddle, so we squeezed the polystyrene into the top half of the handle and it worked a treat but there was a little gap so when it came to the waves the water came in a bit so I tentatively moved it down to cover the gap (I say tentatively as the polystyrene was very fragile since it has been out in the elements for a long time I think!) and to my relief that stopped all the splashing  so tomorrow I hope to have a dry butt!
So with this wind coming from the west comes it is very cold out on the kayaks - I bought along my cycling arm warmers as a back up in case it gets really cold and I didn't think I would use them but I wore them all day! and at times I had my polyprop top on too and my beanie and sun hat to keep the head warm!  funny enough you only have to go around the corner out of the wind and it is warmer - it is just when the river is open to the prevailing wind.
Tomorrow we think the forecast is for very strong wind!
One thing I did see today was this really cute paddle steamer house boat - not sure if it actually works or if they have just planted it there as a holiday home but it looks nice ... 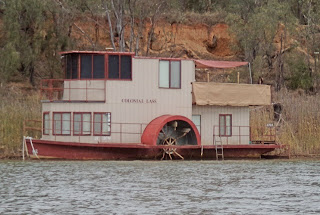 So since we started at 1694 our goal was to get to 1674 before we start looking for a camp spot.  On our charts there was a nice spot just at 1674 but we thought we would continue to the next beach but that was not great and our charts showed that there were no more beaches for a looooooooooong time so by now our arms were very tired and we had to go another 4km before coming across a spot to beach the kayaks and climb the embankment.  Again someone has created some rudimentary steps for us! 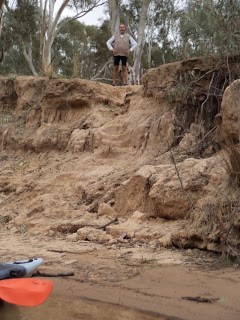 at the top it is a really nice clear area and we are the only ones here ... 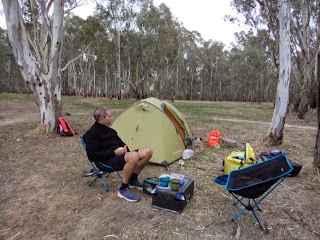 there is a house opposite us - you may be able to see it in the photo below ... 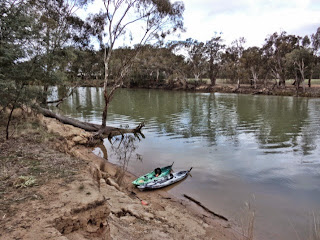 so day 2 without a shower and although it is cold I really wanted a warmer bath today so I braved it and fortunately the wind died down this evening so it wasn't painful when having a wash.  We are arriving a bit late at our campsites so I haven't been able to wash clothes and not having the bikes to act as a washing line is a real bummer so I have taken to using the bushes and decorated them with towels! 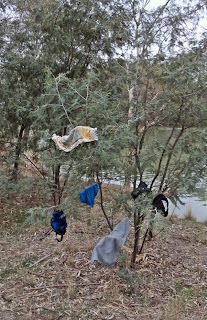 Dinner tonight was creamy dahl curry and rice.  Tomorrow we pass a marina that has a small store so maybe we might get some hot chips if it is cold!
The internet is very slow along here and takes a great deal of patience when doing this blog ... Neil can't go on the internet while I am doing this blog as it slows us right down!
til tomorrow!