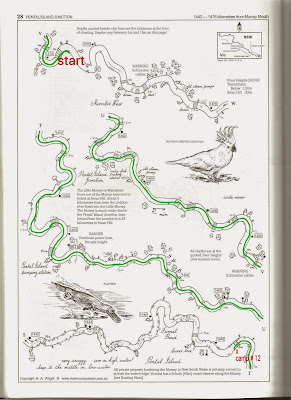 It was such a cloudless morning when we woke up, will have to wear a long sleeve tonight as I woke last night with cold arms - Kouta slept at my feet part of the night and he was warm!

Our eagles were flying around this morning - I think they were waiting for us to leave.  We did see a Kite not long after we started. 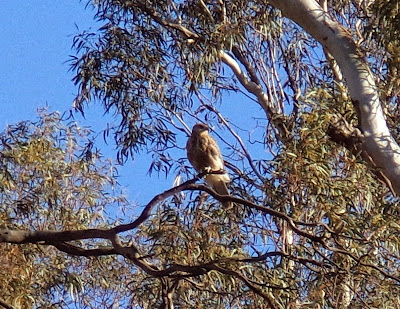 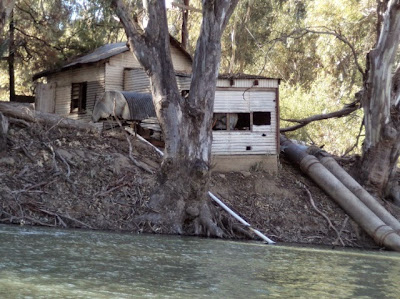 usually the new pipe and pump is built alongside the old one - in the photo above you can see the small white pipe coming out of the water to a modern pump system and then a very old piece of corrugated iron covering it!

About 10km up the river we passed the river that flows into the Loddon and then into the Murray a little later on and this form Pental Island.

We weren't quite sure what sort of island Pental Island was - it most definitely is not like Gunbower Island  a state forest in fact Pental Island is just like the main land - farms!  Not alot of houses along this side but a few pumping stations going into clear farmed land.
Alot of straight stretches this morning and we had to have a delayed cuppa as we could not find a place to beach the kayaks - we had 3 attempts and all failed - the first was not enough clay to beach and hold the kayaks while we got out, the next was amongst big tree snags which created to swift a flow of the river and the boats couldn't be anchored to get out (thoughts of Neils kayak floating off again discouraged this beaching!) and the last was again not enough clay to anchor the kayaks.  So 30mins later we find a small beach that could take the 2 kayaks.  Not liking Pental Island!

So with this in mind we did debate just how easy it would be to find our camp spot.  We have been discussing the various house boats on this river that we have seen and we have seen all sorts from flash to basic.  A few have been for sale and we both love the lifestyle of a riverboat and we couldn't believe that we came across one for sale and it is at such a bargain price  that we are seriously considering it.  We stopped by it and had a good look at it and are thinking about putting an offer in ... it is a little bit run down and needs a bit of renovating but we think when we get to Swan Hill we will put an offer in ... what do you think? 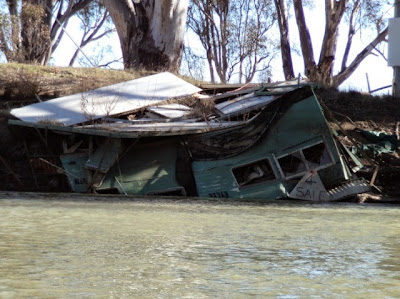 LOL the houseboat must have been damaged in the floods around 2011.  I like the for sale sign!

So we had sun all day today - not  a cloud in sight which means that we will probably have a very cold night tonight again!  We did struggle to find a spot to camp and in desperation we came across one near an aerial that keeps track of the tagged fish in the river but it was so boggy and messy that I said no so just down the river I found a chanel and there was a nice little area to beach the kayaks so we chose this as our camp spot - a short day and another day like today for tomorrow and a smaller one on Sunday rather than 2 long hard days into Swan Hill. 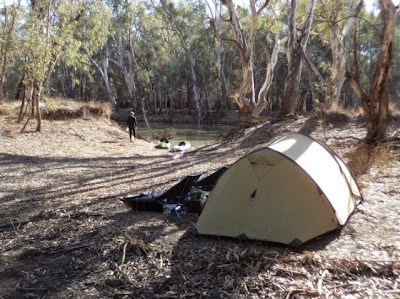