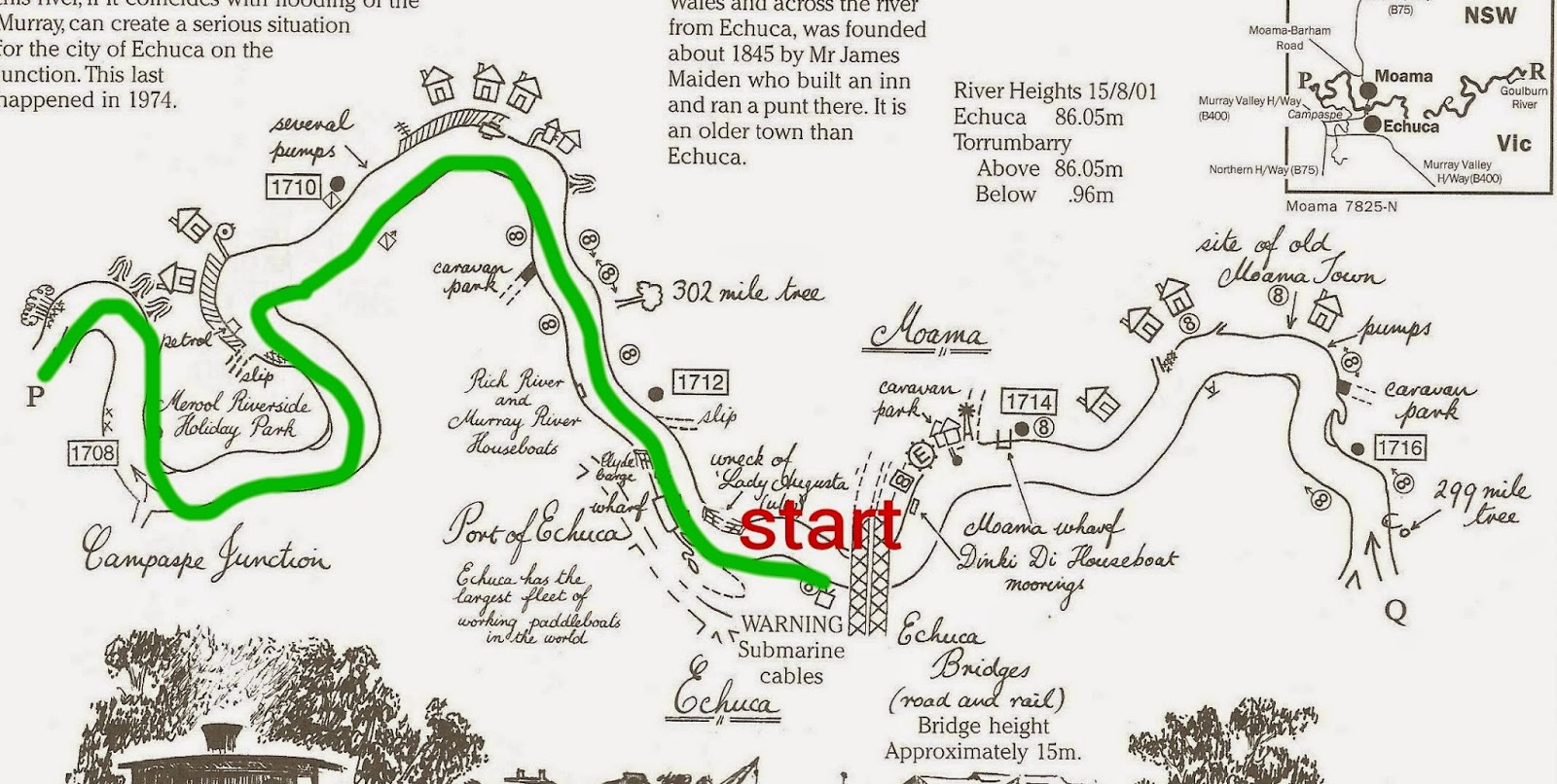 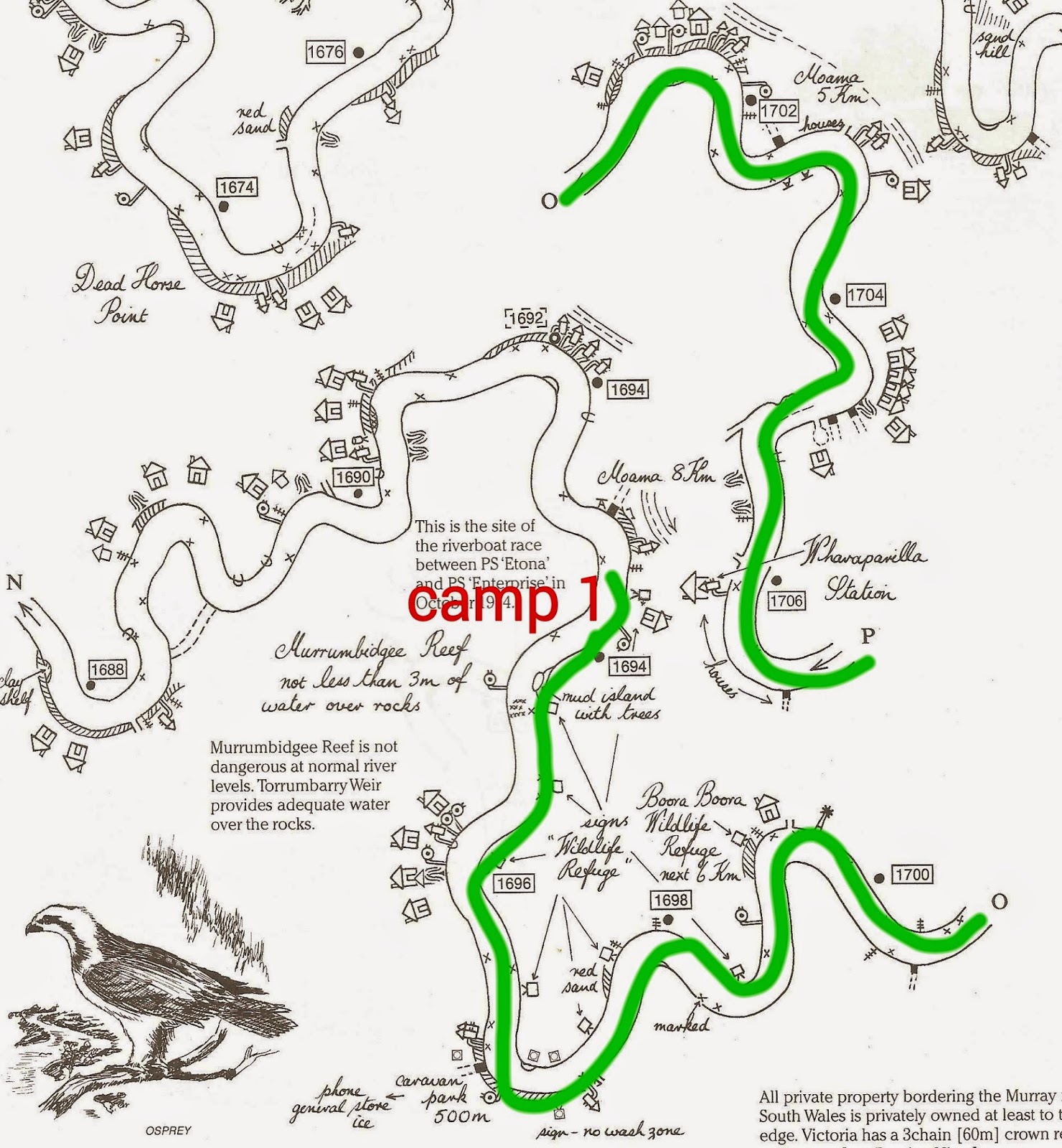 To understand these maps you follow from the start where the green line ends it will have a letter - take note of the letter and find the letter on the next map and continue on from there!  (remember because we are counting backwards in distance we are also going backwards alphabetically)
Thursday 7 May = 1712km to 1694km
todays distance = 18km / total distance = 18km
Dear Diary,
who the f#@k had the idea of paddling the Murray river!  lol just joking!  It was a good days paddling!
We left Bendigo at around 8.30am and drove the 80km or so to Echuca ... Leanne took great joy in announcing that it was 1 degree outside ... Neil and I are both in shorts!  In fact it wasn't too bad as there was no wind and as long as you stayed in the sun it wasn't so silly to be wearing shorts!
Arrived at Echuca near the information center and found a good place to launch.  It took us around 1 hour to put all our gear in ... 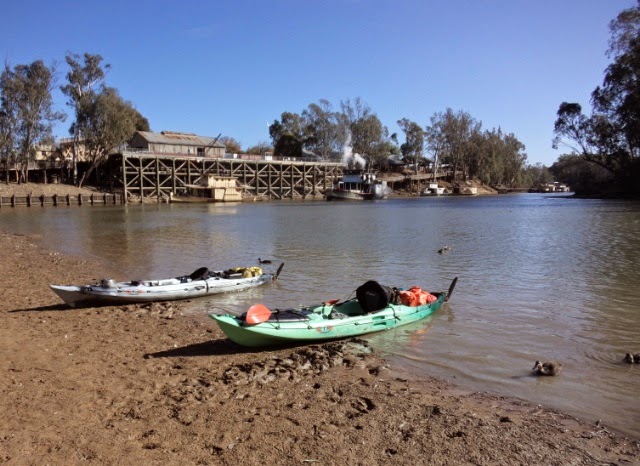 if you look around where the kayaks are you can see that there are alot of foot prints ... in fact it is really muddy and soft so we were ankle deep in mud 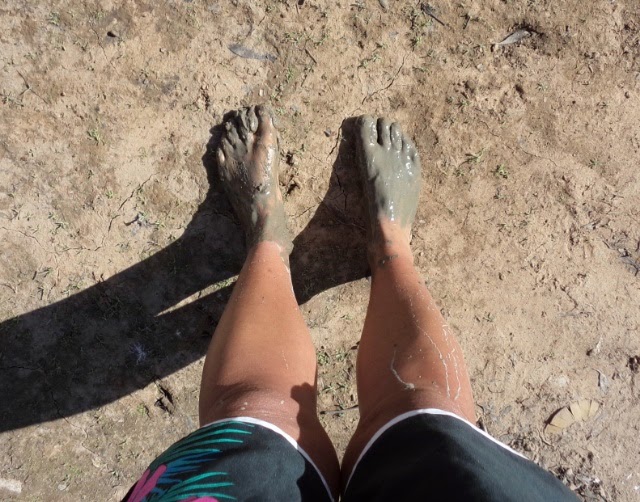 in this photo if you look at Neil he is about 1/2m from the waterline and almost knee deep not in water but mud! 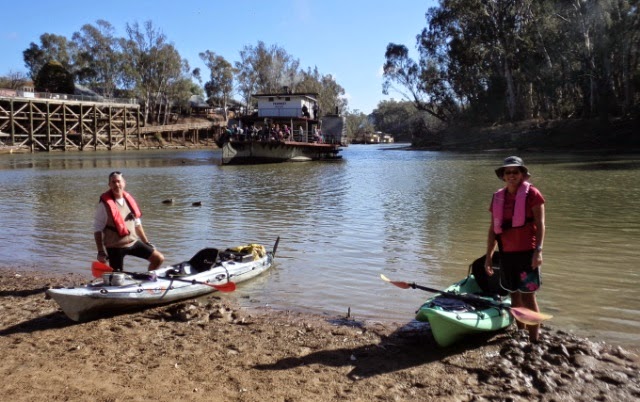 kouta hid in the car for most ot the time while we packed, eventually we got him out and he clearly shows his enthusiam towards kayaking by turning his back to us pretending we don't exist and really he is here simply to wave us good bye and will go back with Leanne to Bendigo ... 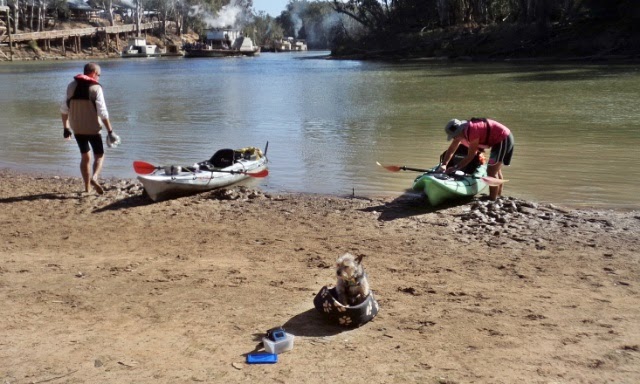 until Neil picks him up and puts him in his tub ... 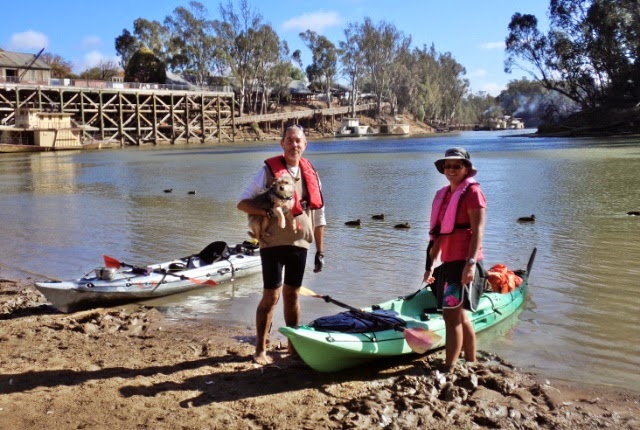 and we are off, it is a lovely clear sunny day, the kayaks are loaded and are carrying about 30kg each 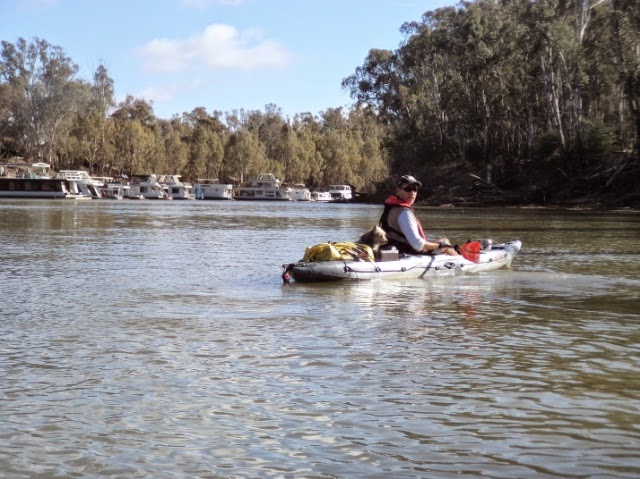 a few paddlesteamers also were leaving the same time as us and what surprised me was that they don't create a great deal of wake which is good as we had a few pass us today ... 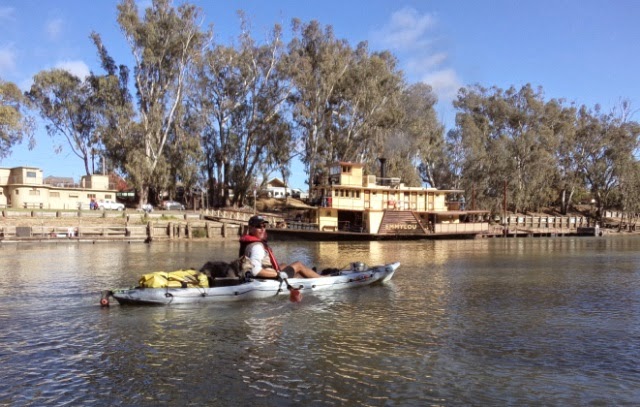 to keep track of how far we travel each day there are 2km markers on the NSW side and sometimes they are missing and we can only guess that we have come a certain distance ... the start was at 1712km from the mouth of the river in South Australia so the number will be going down as we go along as we are getting closer and closer to the mouth of the Murray. 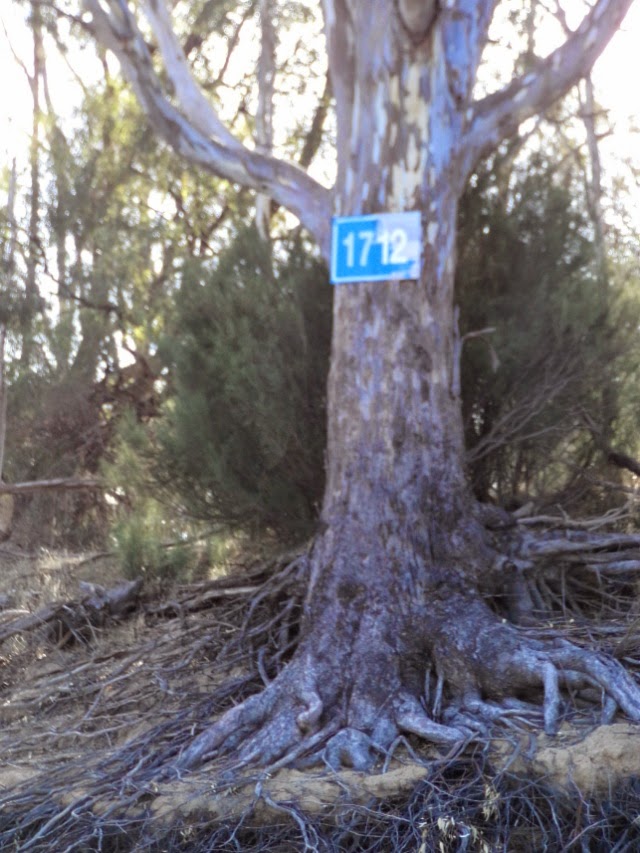 As we are paddling along the wind is blowing and since the river winds its way along sometimes you have no wind, sometimes it is blowing a gale and sometimes it is behind you!  So it was a mixed bag today and we had a bit of everything!
Plenty of house boats about and we reckon around 20 passed us and they were going to Echuca.
We did see alot of houses along the river near  Echuca and in this photo up on the embankment is a Holiday park and below are all house boats for hire ... 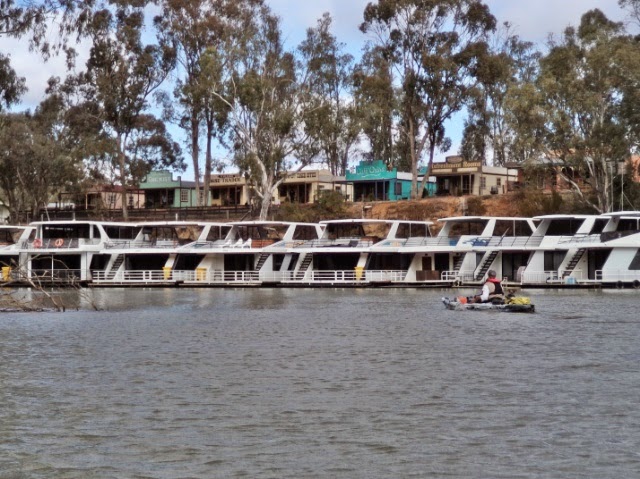 What really surprised me was the wind on the river, I thought it might be a bit more sheltered but it wasn't and at times it was like kayaking on the estuaries along the coastline of Victoria, luckily the river isn't straight so you only had to go around the next bend and the wind would be coming from another direction to what you are paddling.  At times the wind is strong and the river had a fair bit of chop and some water came into my Kayak so I had a wet butt for most of the day! 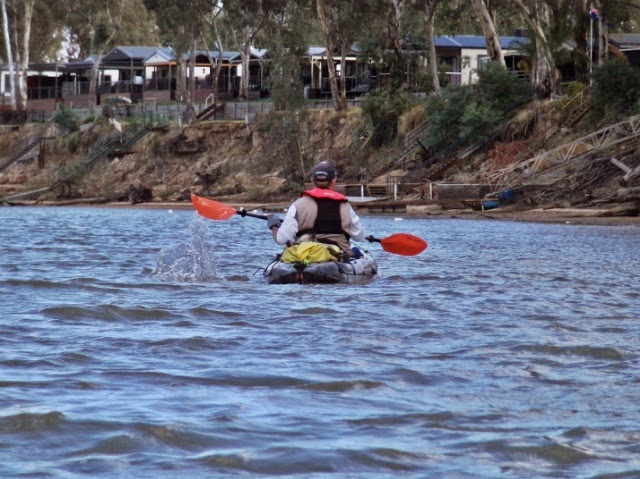 Not far from Echuca we come across where the Campaspe River joins the Murray and you can see the difference in the water where they join - the calm is coming from the Campaspe while the Murray has little waves! 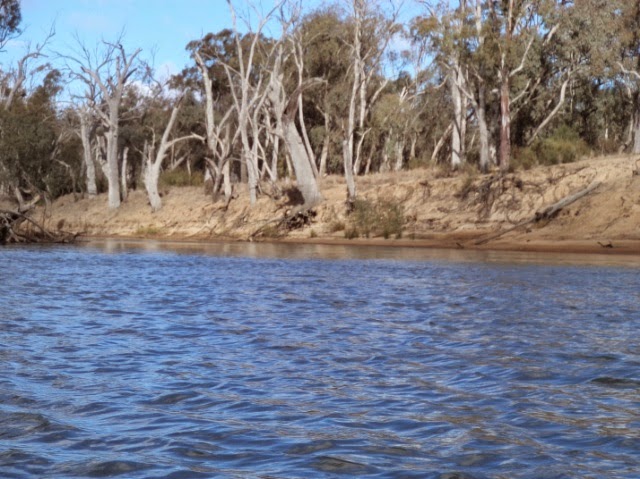 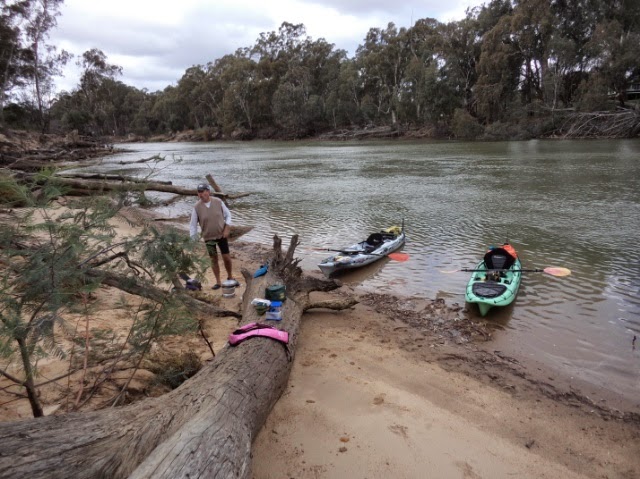 as the day progress the clouds start to build and our sun disappears and the wind is really blowing now and it is a little cooler especially when you stop, at one point I took this photo thinking that it might just rain! 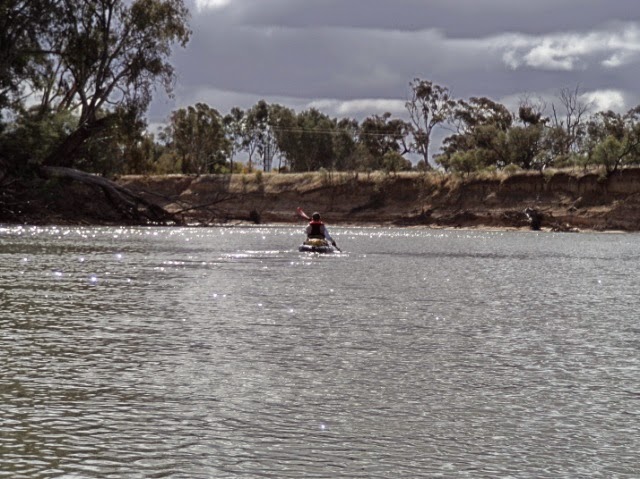 there is plenty of places to stop and camp and most of the edges are like this ... 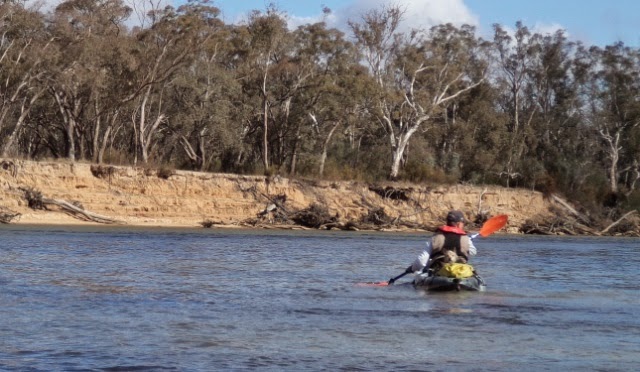 you can see that there is a little beach and above it is an embankment which is about 5m high.  Some places have a lovely big beach and the embankment is easy to walk up, or someone has made some clay stairs.  Generally the big beaches have some whopping great big house boat taking up space and generally these big beaches also have the better easier to walk up embankments!  Speaking of house boats we came across this one just before we decided to stop and it is a real nice one! 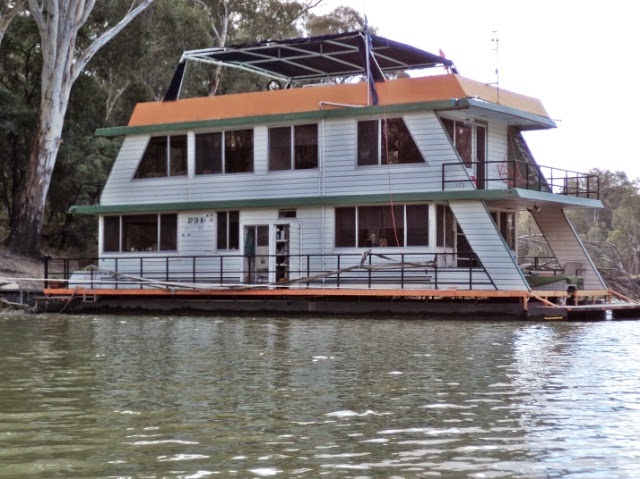 so the 1694km sign was missing so we guessed it is around here somewhere so we decided to camp here tonight - there was a small beach and up in the embankment we could see someone had made so rudimentary clay stairs - where Neil is standing ... 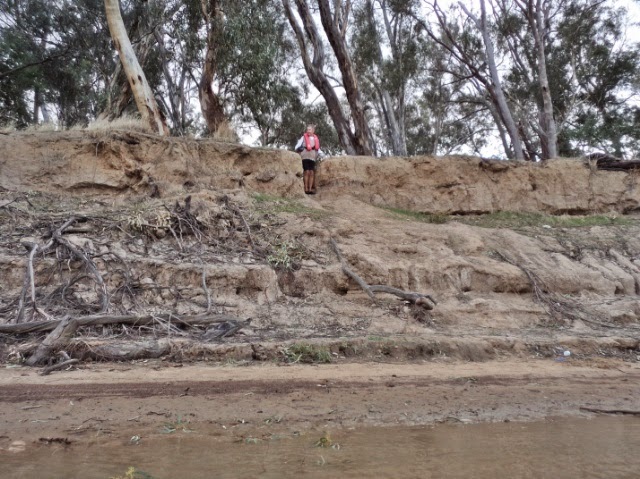 once up on the embankment it is flat and spacious and perfect for the tent.  Clearly this site has been use before as there is an old fire pit and also a 4WD track - hopefully they won't turn up tonight looking for their campsite! 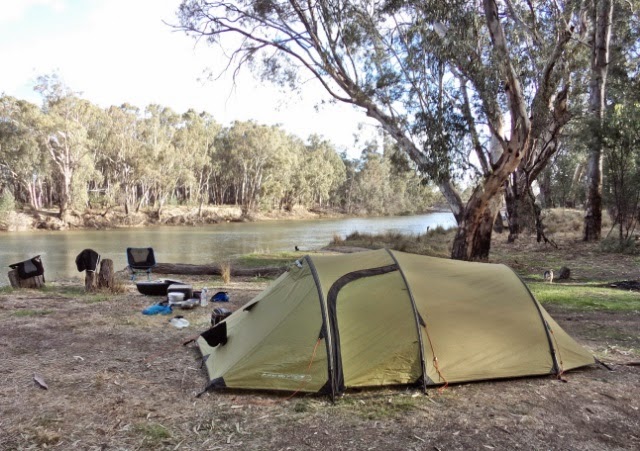 this is the view from where we are camped looking back in the Echuca direction and down on the kayaks which are pulled up futher to the base of the embankment. 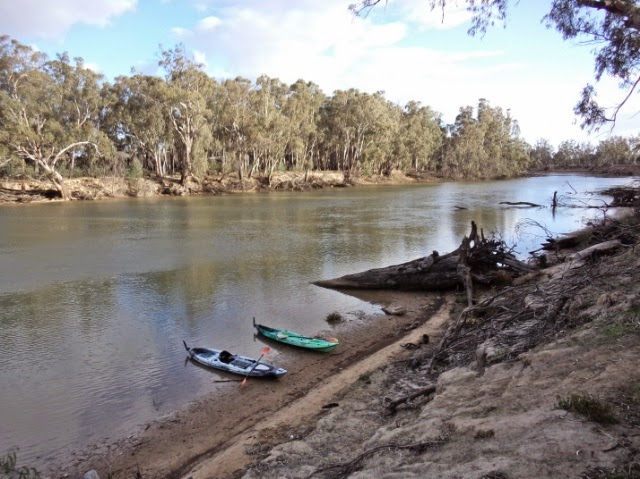 We are both weary in the arms and are happy we did the 18km today - hopefully the arms will recover to do it all again tomorrow!
Posted by Janet O'Brien at 6:48 PM