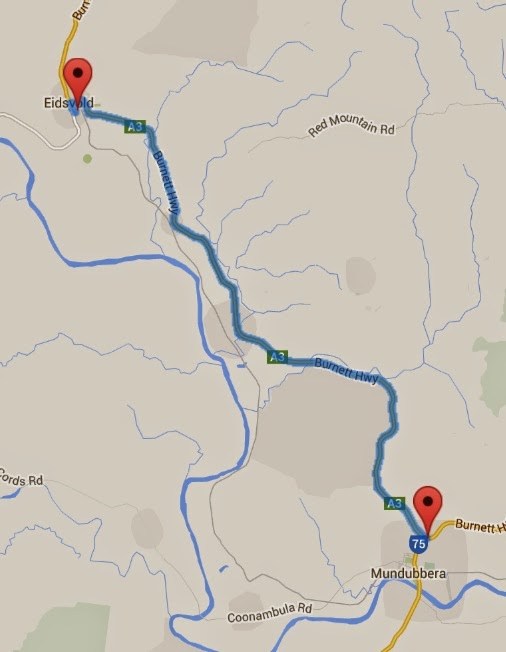 You know how on yesterdays blog I mentioned that there were quite a few backpackers well more arrived last night and it was like being at a French planning meeting of how to bomb the Rainbow Warrior!  I tell you if we didn't learn how to speak French last night then we have no hope of learning any language.  But they were noisy even at midnight and I was thinking about telling them to quieten (in my own way!!!) but while in the process of plucking up enough courage  another French backpacker told them to quieten as not long after that they all went to bed.  Thinking I might get a little revenge this morning by accidently banging the trangia pots on the metal tables didn't happen as they woke and got up at the crack of dawn ... we assume to go to the farms to see if there is any work today.
So knowing it is a short day we slept in and didn't get out until 7am, the sleep in didn't make any difference as we were still away just after 8am!  We are on the Burnett highway and it has a shoulder for the bulk of the way.  It is only 35km to Eidsvold but we have 3 hills in that 35km.  The first is a 7km one just up the road from us.  It was pretty easy since we are not so loaded with water.  Although the legs did feel it as this is the 4th day cycling.  Riding through this type of country side is really nice.  Not too many citrus farms but more grazing farms but very green and scenic despite the hills!
We made good time to Eidsvold and have come to the caravan park as we need a shower (haven't had one since Friday!)  The park is nice.  It is run by an elderly couple who are looking after it for their Son who has a 25 year lease on the 3 rivers Caravan Park in Mundubbera (he has this lease here at Eidsvold for 12 months from the council).  The couple were telling us how their son had been in the Mundubbera park for 12 months when there was a flood and it did alot of flood damage to the park itself (it must have been an extra big flood as the park is a fair way up from the river!) and wiped out of the vans in the park etc.  So they have to start again and are in debt heavily and will take the full 25 years of the lease to pay it off.
Neil was chatting to them about the backpackers and their son also think that the council should provide for the influx of backpackers as they have a tendancy to hang around the park area near the river (they don't camp there as it is monitored) and around the netball courts in town being a nuisance and if the black stump is anything to go by they sure do leave their mark ... around the water tap is where they do their dishes and the water is flowing down under some of the caravans that are parked there and there is bits of pasta, rice, onions etc all lying around on the ground.  I don't blame the backpackers as this town and farmers need them to pick their crop but surely they should open up the showgrounds for a nominal fee (instead of a profit) so they can be all in one area and make a racket down there rather than at the tourist rest areas!!!
This caravan park also has a lot of workers dongas for the road works that is going on, so tonight they will come back here with all their utes and trucks and make a big racket again lets hope they aren't as noisy as backpackers!  You can see the dongas they are in behind our tent ... 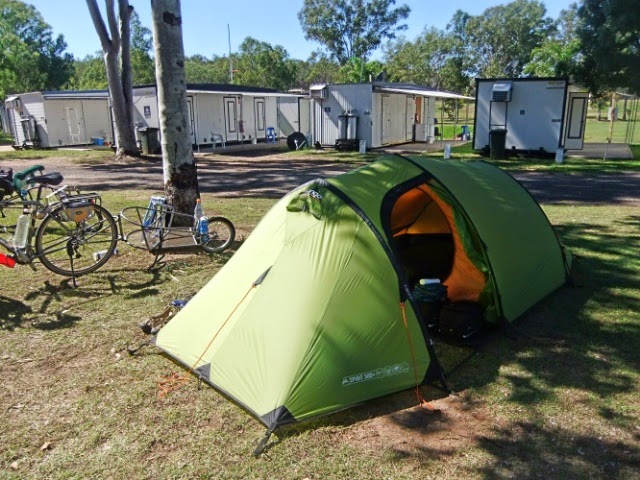 this are mobile dongas that are owned by the road company doing the work and once the contract is up in June they  move them on.
So Neil and I have a plan now to get us to Mt Morgan where it looks like we are having our week long break.  We are due for a rest day so we have decided to go 10km tomorrow to the Ceratodus rest area and stay there tomorrow and Wednesday.  We thought about going there today but it has been a while since we have had a shower, so we will have a quick shower tomorrow morning as it is more than likely our next shower won't be until Biloela on Friday!!!
Posted by Janet O'Brien at 2:30 PM