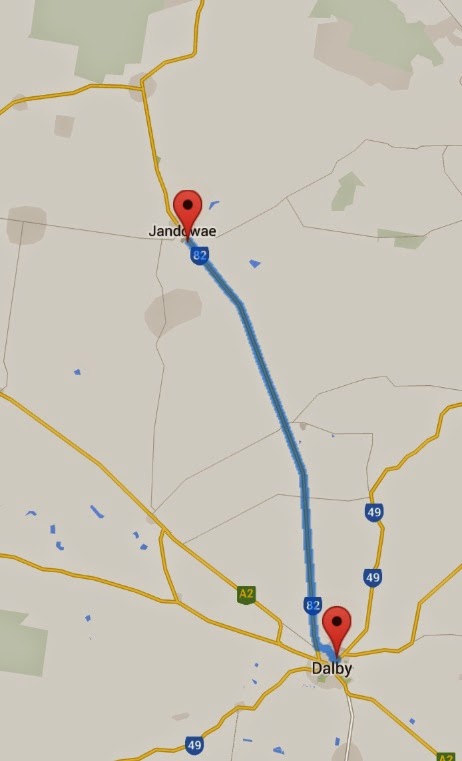 Although today was a relatively short day it was a tough one ... we have been keeping an eye on the weather since we left Warwick as there is suppose to be a low coming up from the South West and it is really meant to drop the temperatures around here from mid 20's to 15-16 degrees and with this low comes a very strong westerly wind.  So since Warwick each day Elders has changed and decreased the intensity of the winds from 30km per hour to 20km per hour.  But today we see they have revised their wind speed back to 30km per hour and changed from a south west to a westerly which means 2 days of solid brick wall head winds for us.
Today we knew we were going to have a north wind and since the road is going in a northerly direction we knew it was going to be a headwind.  But it was a lot stronger than what was forecasted (14km per hour) - they were 20km per hour so the going was slow.  It is very flat out here and very much out in the open so there were no trees, hills or houses to block out the wind for us.  It took us 4 hours to get here!
We did take a coffee break at the small town of Jimbour.  The rest area had a historic tractor which I though you might like Ray ... however for some strange reason the tractor is behind a heavily fortified iron bar/prison cell/I'm on Alcatraz type enclosure that I couldn't quite get good photos of it.  I tell you for something that you will find in a scrap heap on nearly everyones farm we couldn't understand why it was in an enclosure with massive thick bars so you couldn't touch it or take a decent photo of it ... I am surprised it didn't have a moat around it ... 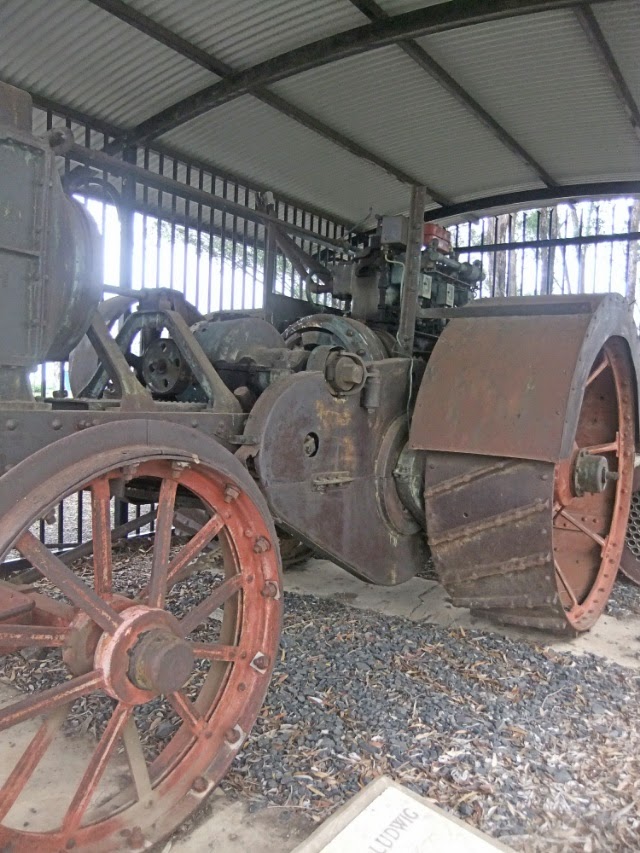 back view where you stand and steer it ... 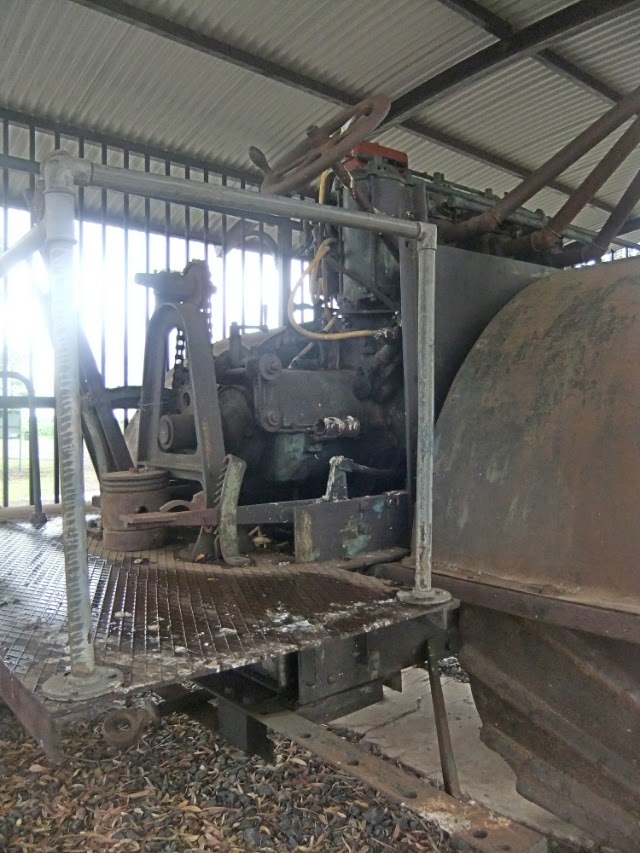 here is a little blurb about it ... 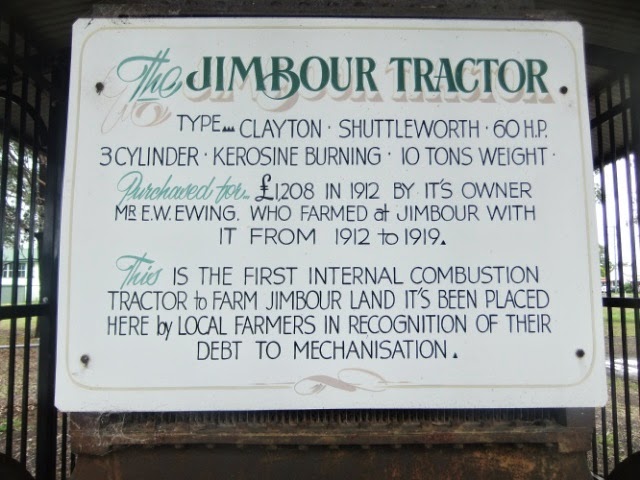 there was also a plaque for the explorer Leichhardt ... which we were going to go on but due to very strong winds we have changed our plans! 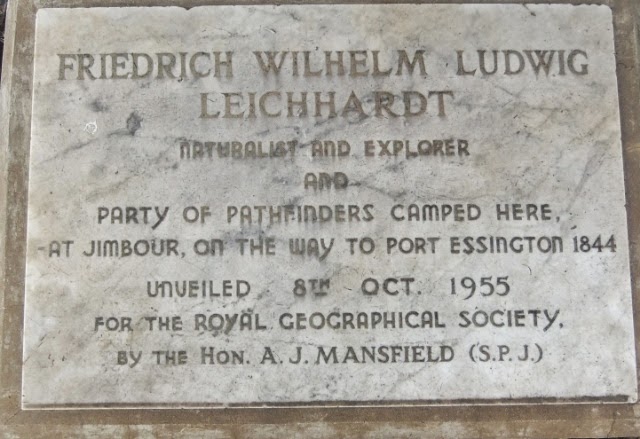 We get to Jandowae just after lunch and about 10km out Neil saw a sign saying there is camping at the showgrounds ... but the town does have a caravan park (which is advertised in the Tourist literature along with every other caravan park in this region) ... now our problem is this  ... alot of caravan parks have been taken over or are filled up with mine workers and dongas ... hence small towns have opened up the showgrounds for tourists to stay in.  The caravan park is $25 unpowered but the showgrounds is $10 unpowered or $15 powered ... it is a no brainer!  The caravan park is right behind us and we are trying to figure out where our tent will go ... it is chockers with portable dongas .
Oops I forgot this photo of a cactus growing out of the gutter of a table shelter at Jimbour ... 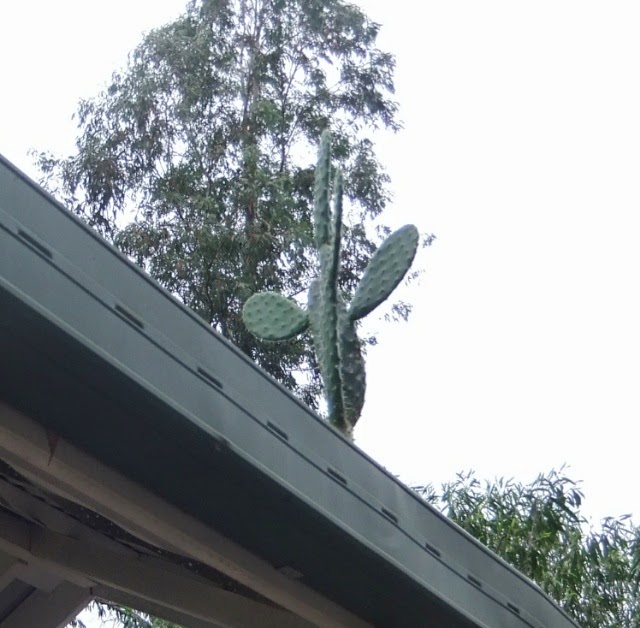 There are designated sites for caravans but since we are little and the grey skies are threatening (we had a we storm first thing this morning at Dalby which quickly passed) we decided to pitch the tent near a big shelter which has tables.  Lucky we did as about 30mins after we got here it poured with rain! 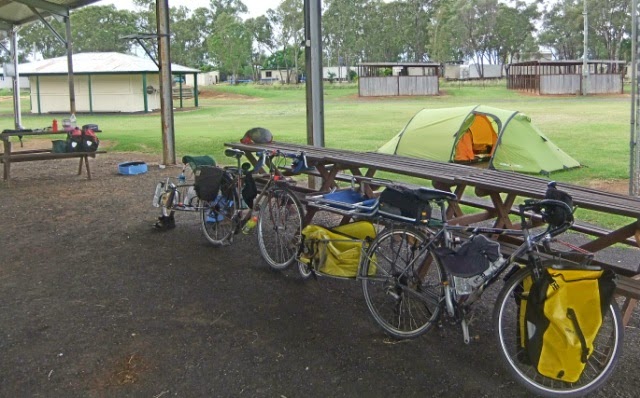 The facilities are pretty basic, the toilets are okay and the showers are what you expect ... while I had a shower Neil got to play with a few things lying around the showgrounds ... 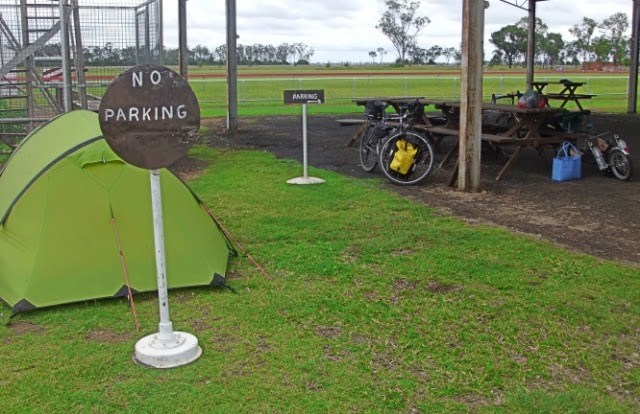 he loves the no parking and parking signs!
So like I said if we continue to Chinchilla and then Condamine the next day we will be going into solid headwinds so we have decided to take the road to Mundubbera which is 150km from here so tomorrow will be bush camping.  The Mundubbera road runs north so we will be having a cross wind but already todays winds have turned and are coming from the south west ... I am assuming the forecast temperature of 16 degrees tomorrow will have winds from the south west rather than the forecasted west winds ... they are going to be 30km per hour.
We have been to Mundubbera before and will go along the Burnett highway up to Biloela ... it is a shame that the weather but hey ho ... Not sure if we will stay in Mundubbera as it may be full of backpackers at the campground and they are just the pigs arse when it comes to camping ... generally they are filthy and noisy!!! Last time we stayed at the Black Stump rest area which was quite good for us as there was a grass section that is seperate from the parking area.
So we will be heading into the hills from now on!
Posted by Janet O'Brien at 4:14 PM