Well we made the right decision in changing from heading west to going north.  We woke on Saturday morning to find the wind blowing from the west like it was forecasted and it was blowing hard!
We left  Jandowae around 8am and the road continues north, fortunately for us we had a tree line on our left so that blocked alot of the wind coming at us from the west.  We had this tree line for the first 30km and then the trees thinned out a bit but the wind was okay ... the road is very quiet so it didn't matter if we got blown into the middle of the road.
The road is still flat and the road runs north, then east a bit, then north, then east a bit, then north, then east a bit! and finally continues north!!! We were carrying a full load of drinking water and had intended to pick up water for the bladders at Durong.
There is not much out here of interest but we did come across these little creations outside someones farm ...

At Durong which is at the 57km mark we found the town hall and filled up the bladders and topped up the water bottles ... the hall had a kindergarten with a sink so we used the water from there.  From here the road basically goes straight for the next 10km ... 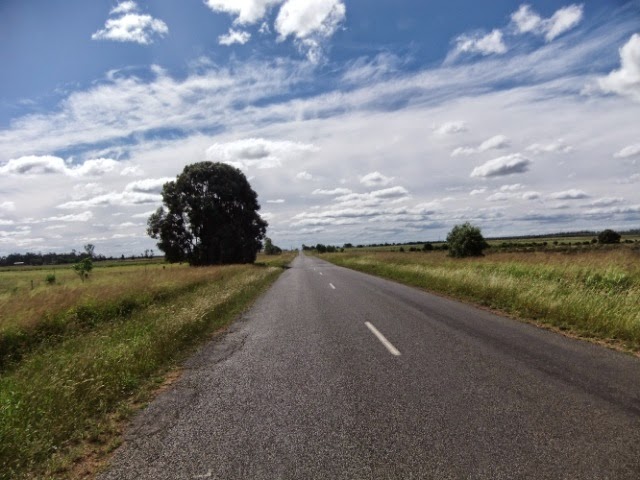 by now the wind has shifted slightly to the south so it is now sitting across our shoulders and is helping us a bit.  From about 65km the road begins to roll a bit but the legs are still okay ... up until now we hadn't seen many kangaroos only the odd one here and there but this morning we managed to see a massive group of 21 and then another 10 added to this group once they saw us and they began to hop away like they always do.  It is funny really you spot 2 and as you pass up pop all these little heads and next thing you know you have a very big group bounding along!  We also saw 2 emus and it was a hell of a job trying to get them on camera ... 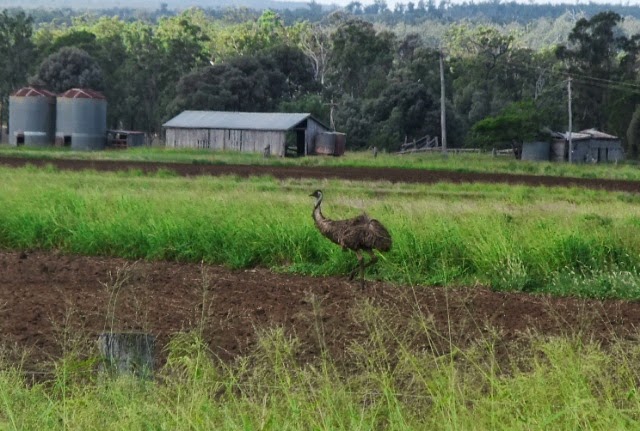 At the 73km mark you came to a lovely little spot with  a shelter and boab trees, we stopped here for cheese and crackers and were umming and ahhhing over whether or not to stop here.  Neil wanted to as he loved the boab trees but we were aiming for the 90km mark or there abouts ... 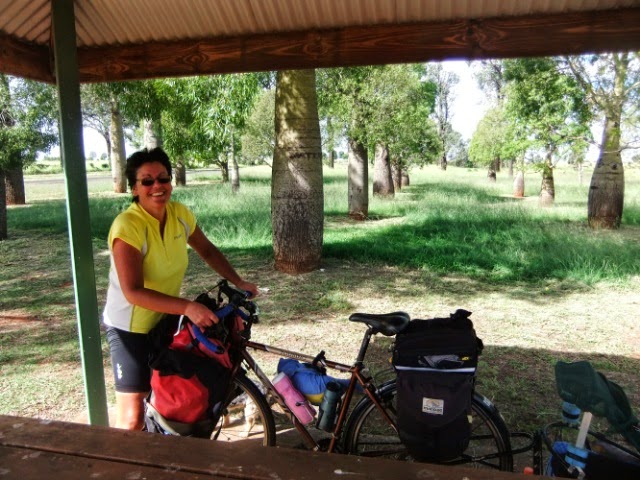 the boab trees are in neat little rows and they are little themselves ... it would have been nice to pitch the tent amongst them ... 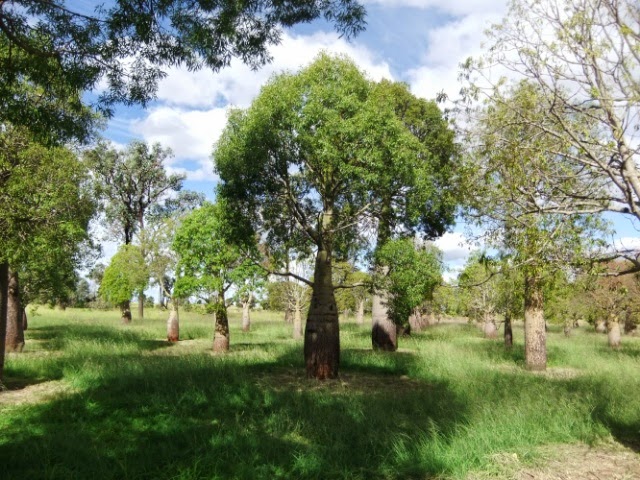 but we decided to continue as that would leave us longer for the next day.  From this spot to Boondooma historical homstead at 80km the road begins to get a little undulating and with all the water we are carrying you can feel it as you go up the hills.  There is camping at the homestead but be decide to push on since we have carried all this water we might as well bushcamp!  So we climb up from the creek, then up and down for the next 10km until we come to a dirt road that has a corner block that is unfenced and it is also at the 90km mark so it was the perfect spot.
We set up tent, had a wash and cuppa and there was enough time for dinner - pearl cous cous with tomato vege and lentil soup before it was dark 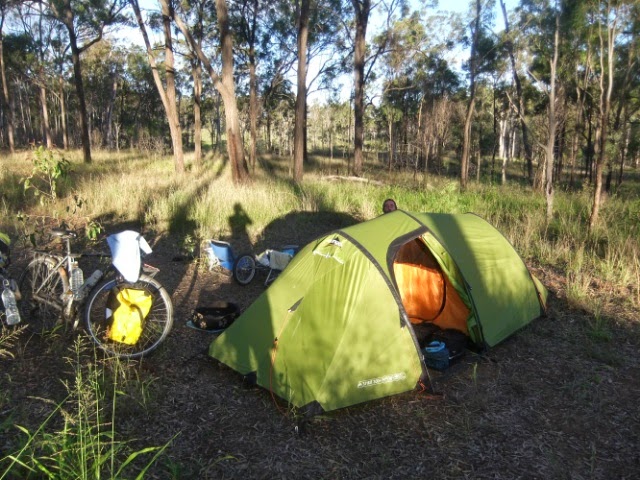 Since this is such a quiet road we had no night traffic.  We woke in the morning and the tent area was in shade and the wind was still blowing from the west so it was cold outside the tent ... around 8 degrees.  It was still cold when we started cycling and it took a while to warm up and before we shed all the layers.  We continued on from the previous day with undulations - generally short steep climbs with longer gradual down hills.  It was like this for the first 30km.  The wind is still blowing strong from the west but the trees and hills block it considerably ... although it would have been nice to have the wind blow our tails up the short sharp undulations!
Cuppa was at our usual spots - some farmers driveway! 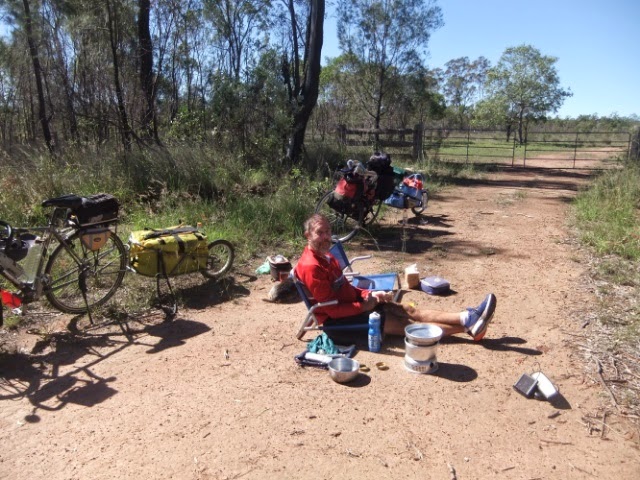 From 30 - 50km it is basically down hill, but like all down hills there are a few short up hills but generally we were loosing alot of altitude and we dropped from 300m to 100m to come out onto some flat land finally and also to take advantage of the wind. 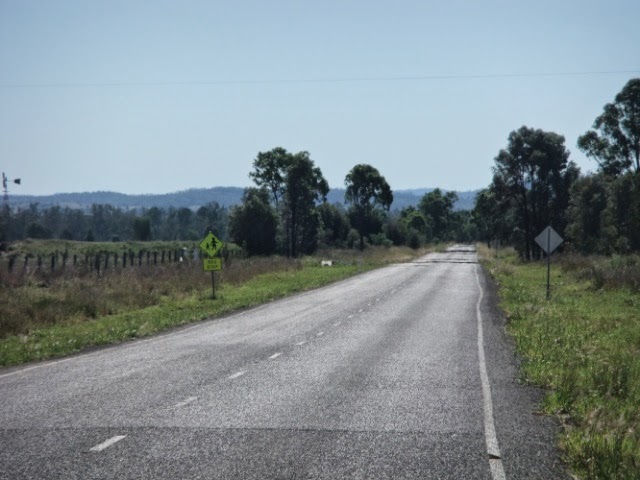 Mundubbera is somwhere at the base of those mountains which we will be going along up to Biloela.  We are only about 15km from Mundubbera at this point so since the road is relatively flat it was easy going with the wind coming slightly behind our shoulders.  We cross the Boyne river which is empty and then climb up and down to the Burnett river which again looks empty but there is a weir to control the water.  The rest area across the river was damaged in the January 2013 floods and that is relatively higher than the river bed so when it rains and this river flows it really must be quite deep

We stopped of in town to pick up a little food and decided to go out to the Burnett highway and stay at the black stump rest area.  When we got there there was one other campervan but 5 small back packer tents so we found our spot in the corner and throughout the rest of the afternoon the parking lot filled up with campervans and caravans ... with us tonight are 7 caravans and 6 backpacker cars.  The backpackers are waiting for the seasonal work to begin which will be within the next 2 weeks.  Mandarins, avocadoes and mangoes and also grapes are grown in this region.
We did buy some local madarins from the IGA and they were delicious.  We came to the rest area and we quickly set up tent, had a wash and had a late lunch or early dinner of bacon and egg sandwiches (it is getting a little hard to stick to the vegetarian diet with such limited cooking facilities so the odd meat meal slips in every now and then!)  Then we sat down to watch the Geelong vs. Richmond game (we missed the first quarter) at half time we had a cuppa and then 3/4 time we polished of a 1kg tub of vanilla custard (marked down of course!!!) mmmmmmmmm it was delicious ... now our tummies are full!  Tomorrow we have a short day to Eidsvold.
Posted by Janet O'Brien at 2:22 PM