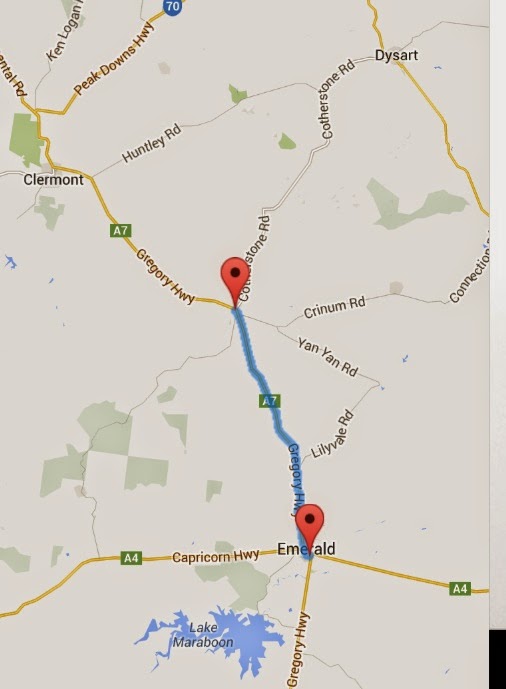 Today was probably one of those days where every little thing that could go wrong ... does go wrong ... nothing big just small things.  Firstly I have a small ant invasion going on in one of the food bags ... they were after Neils honey, so that put me behind on Brekky, Neil had the coffee and toast done and I had barely got anything out of the bags for brekky instead I had everything out and on the table looking for ants.  So brekky was a little delayed.
Secondly, just about to leave and Neil notices my back tyre is a little flat (considering I pumped up all the tyres yesterday that shouldn't be!) so we unloaded my bike and replaced the tube as it is perishing rather than an actual puncture.  So that put us about 20mins behind our departure time.
When we finally did depart it was difficult getting across the road ... it wasn't busy just one way was clear but the other wasn't and there was no where to sit in the middle of the road .... so we had to wait longer than we have every had to wait to cross a busy road!
We get to the end of the road to join up with the Gregory Highway and we can't turn right onto it, we can only turn left so we had to turn left and cross at a set of lights.
So by now I thinking crikey it is always the little things that drive ya nuts!
Finally we are out of here and on the road.  It is a very warm day with a very slight head cross wind but we are going along okay.  We are sucking back the water as it is hot.  The going is pretty flat but not all that scenic.  You catch the odd glimpse of some peaks in the distance and I just assume they are coal slag heaps (I find out later it actually is a genuine mountain range!!!)
So we stop for a pit stop and there is no town between here and Capella and also no rest stops, so we pull over at some parking bay on the other side of the road and I need to go to the toilet.  Now sometimes I get a realy bee in my bonnet over being a girl and having to hide behind a damn bush and squatting where Neil just whips it out anywhere and anytime, where as my toilet stops are alway a major drama - I have to look for shrubs and cover to hide behind so no one from either direction can see me, then I have also consider digging a wee small hole (I detest leaving my toilet paper out in the open) so if the ground is hard I have dig hard, so here I am with my toilet paper in one hand and Koutas poopa scoopa in the other to dig my hole I cross the busy highway and everyone is looking knowing exactly what I am going to do .... really it is the little things today!!!
But wait I haven't finished!  yesterday Neil worked on my brakes and today my front brakes aren't really working .... in fact I am doing a bit of a Fred Flinstone thing with my brakes and using my feet more than my wheel brakes so we have to pull over and Neil works on them.  It only takes about 10mins to fix.  Sort of better now so I will give them a few days as they are new pads and they just need the shine taken off them to work more efficiently.
In between all these little things I managed to get a nice picture of some of the peaks I have been seeing .... 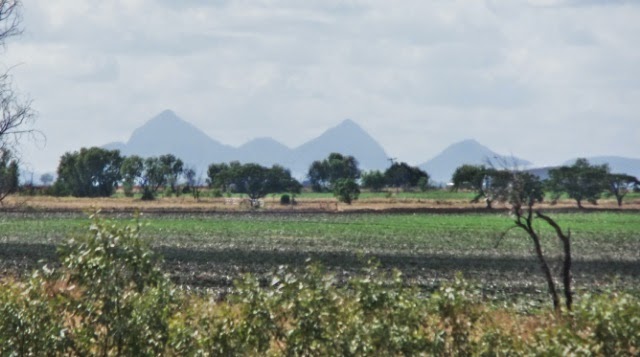 Now in a few blog posts back I was complaining that Australia doesn't provide any lookout points when it comes to photos of scenic views ... well they must have read the blog and gone out and created this spot just for me ...
about 4km out from Capella is a scenic lookout for what I mistook for coal slag heaps as the Peak Down Ranges ... it is difficult to get the whole range in (I don't have that sort of camera!) but the plaque named each peak ... 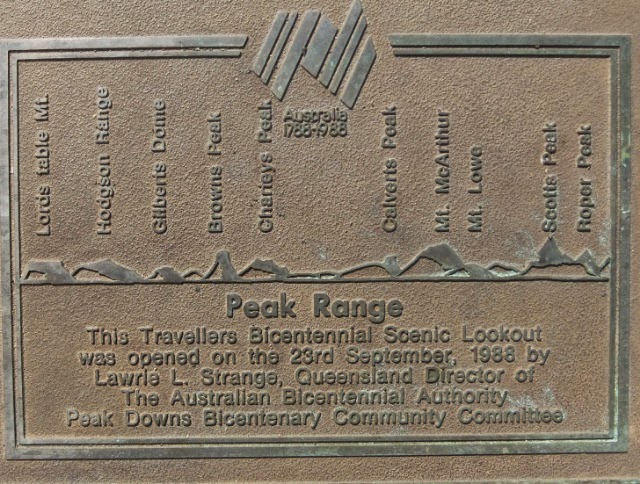 It was difficult to get the peaks in as the trees were in the way at this scenic spot so I continued on and just further down the road there was a much better spot with no big tees in the way ...

so there was a little positive thing for today.
We get to Capella and everything is closed as it is their Showday today and tomorrow so it is a public holiday.  We are riding along and even the small general store is closed so we get to the van park thinking all we have for tea is some of Koutas mince and mushroom soup with lots of bread!!!  Crikey I think what next ... well we knew this park was $25 for unpowered but since Geelong are playing tonight we thought what the heck lets just get powered for an extra $3 ... well was I suprised that he gave us our powered site for the unpowered rate of $25 and it is a good one, he considered that we won't have an airconditioner so he put us in a drive thru site that has a shaded annexe and grass on the other side of it ... 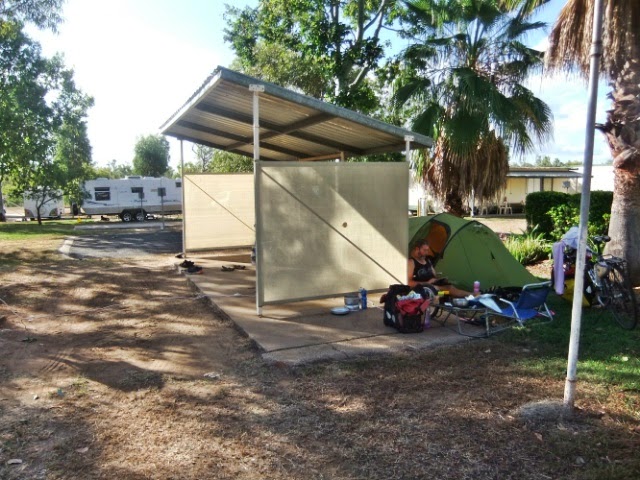 normally a van would park to the left of the shaded annexe and when we arrived that was in sun so we pitched on the other side on the grass and had sun for about 15mins and then we were in shade for the rest of the afternoon ... I was just so happy that finally and wee small positive had happened today ... it is the little things really!
Here is Neil enjoying the shade while all the tablets, batteries etc are charging up! 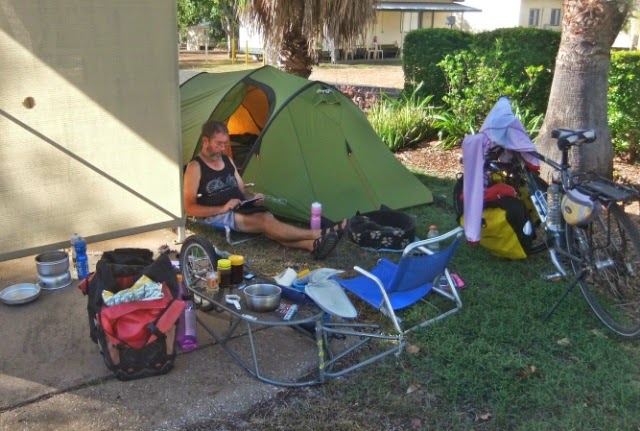 It is a nicely kept park, has a basic kitchen of bbq and fridge .  The amenities are spotless and the grounds are well kept.  It isn't crowded but a few vans have turned up.
Tomorrow is Clermont.
Posted by Janet O'Brien at 4:13 PM