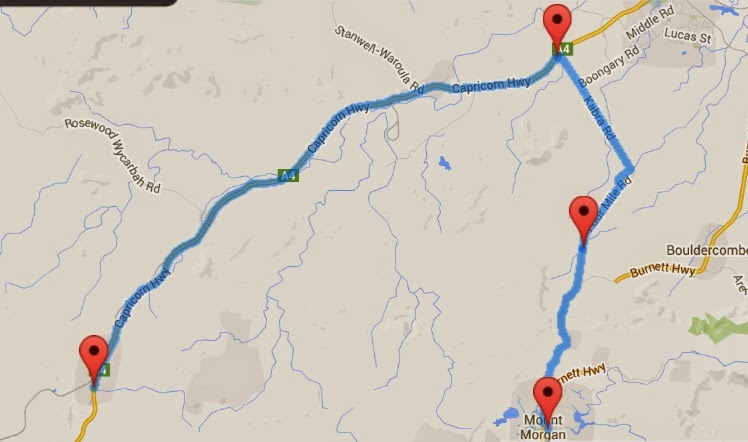 We are back on the road again after a weeks break.   The legs felt good starting out this morning and were a little weary towards the end of the ride ... not sure if that is from the weeks break or from the fact that the bikes are loaded with extra water so they are heavy!  I think it is the latter as Neil was carrying an extra 6kg of water and he was noticing it as was I!
So we had our last toast for a while and set off at 7.30am.  The streets were quiet going through town and as we passed the turnoff to the dam we said a fond farewell.  The major hill this morning is the one going into town from the caravan park.  After town it is undulating until about 7km where you take the turnoff to Kabra ... the road to Gracemere is still closed (due to land slips) which should be finished soon.   About 500m on you start on your decent of the Mount Morgan Ranges.  All of a sudden the road just disappears from sight ... 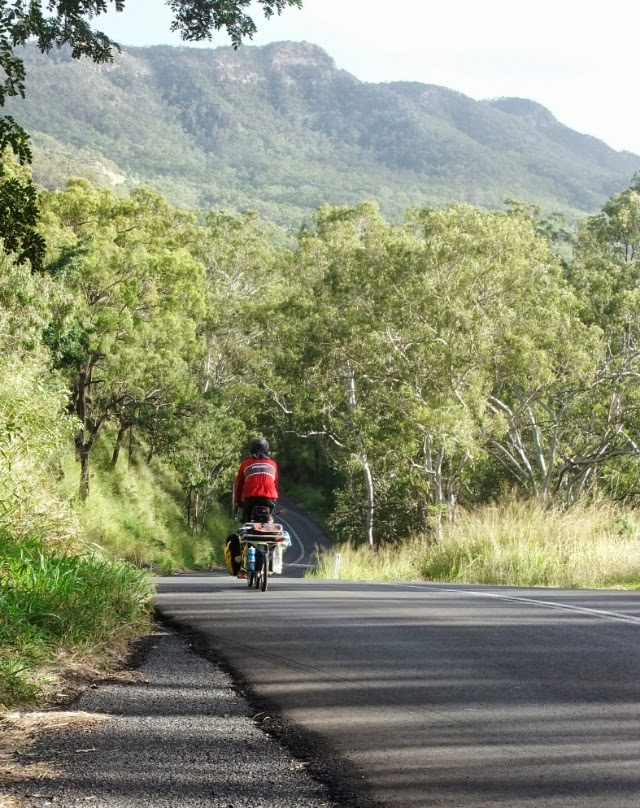 there is a very sharp drop and locals reckon it is 17% - lucky we are going down it!  Although I make Neil go first as I hate going down steep decents so I basically walked down it ... I have no faith in brakes or the state of the road and going down that hill I would pick up so much speed and if there is a bad patch on the road I am not sure if I could manouvere the bike quick enough at that speed to go around it ... so I sort of walked down it ... it is only about 40m long!  But Neil enjoyed it! 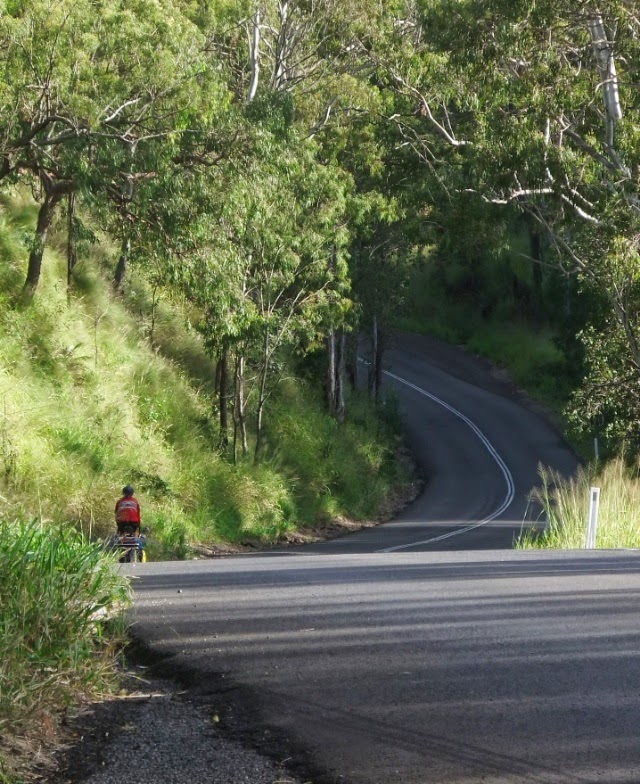 So it is down hill for I don't know how long as it didn't seem like far before you have to start pedalling again ... but looking at the profile it is a short down hill and then undulating up and down to get down.  The traffic was light and those that did pass turned off at the Bouldercombe turnoff so there was little traffic going to Kabra.  We were just saying to a couple we met at the caravan park that traffic is good compared to 4 years ago ... most cars will slow behind us when they can't see what is ahead but in a space of about 30mins 2 cars overtook us without giving a regard as to what might be ahead ... twice I had to point to try to communicate to them that there is an oncoming car and you won't make it ... obviously the local has limited communication skills and still overtook ... one 4WD had to get of the road completely!
So we got to the Kabra turnoff  and joined the Capricorn highway.
We came along this highway for a bit 4 years ago but not at this section, all we know is that there are small towns with no where to stay and no good water!
So with the growth of mines along this road for the next few hundred Kms we expected the highway to be busy.  Today being Sunday it wasn't bad we only came across 1 wide load  and even then that was when we were off the road having a cuppa at Stanwell.  Neil saw the support car and mentioned it to me and while I rushed to get my camera he mentions there is a cop car which made me run as that means the load is massive and the cop car forces the oncoming traffic off the road so the wide load can go through (it takes up both lanes).  So I took the photo ... 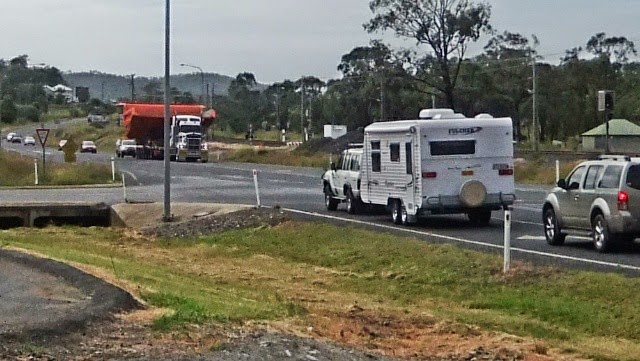 and it was speeding along so I missed the truck front but got the bucket he was carrying that goes on the back of a mine tip truck ... 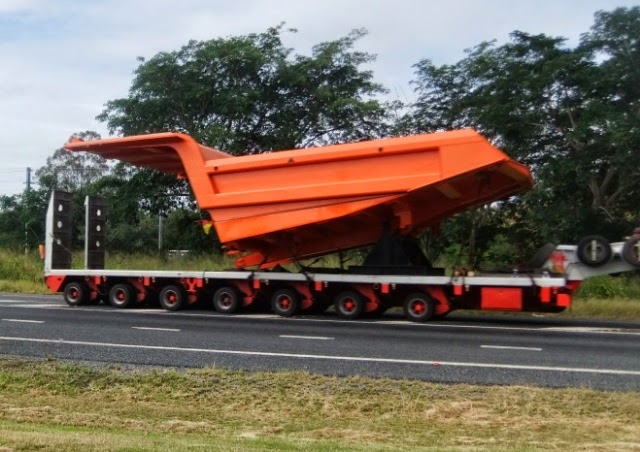 So this highway has a reasonable shoulder and gets a little narrow when there is an overtaking line but still enough room for us so that we don't overhang in the lane so everyone can overtake us with ease even the trucks.
We have a slight tailwind today so the going is easy.  It is up and down country but since this is a major highway (A4) the gradient to go over a small range is nice and ridable and I noticed that when they go over a range they choose the lowest part to go over not like in the back roads where they like to select the highest and make it a steep incline ... ha LOL just call me paranoid!
At Stanwell we found drinkable water at the town hall (the tap was hiding behind 2 gas bottles - and Neil being the expert at finding power points, money and taps he found it!)  So we filled up some extra water bottles and probably have an excess but it is better to have too much drinking water than too little.  Although with the excess weight the legs felt it as we go closer to Westwood as there is a small range to climb - fortunately the grade was easy but you noticed it!
We get here just on 12.30pm and this spot is technically not a designated rest area in the camp 5 book instead Neil has downloaded a Wikicamps app (which has a 14 day free trial) and we found it in there.  As there is no where to camp when we looked in the Camp 5 book except at Duaringa but that would mean a 120km day!  The app is good and we will buy it as it shows all the gravel dump spots which are good for us as they are not bad to camp on (no one stops there!) but later on when we go to the outback it is handy to have these gravel pits as they allow us to get off the road instead off riding in the hope there is a spot to get of the road.
So we set up under some trees and we are 75m from the road and railway line ... we were wondering how often the trains go by here ... it wasn't long before one with coal passes through ... 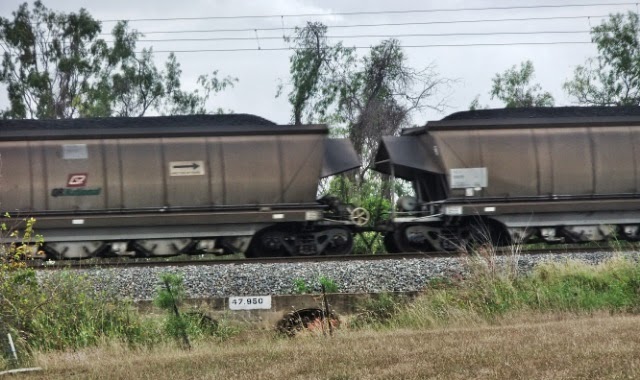 ha the look on Neils face says it all with the train in the background .... I think he is thinking of the camp spot at Nebo (4 years ago) where they came through every 15mins 24 hours a day!!! 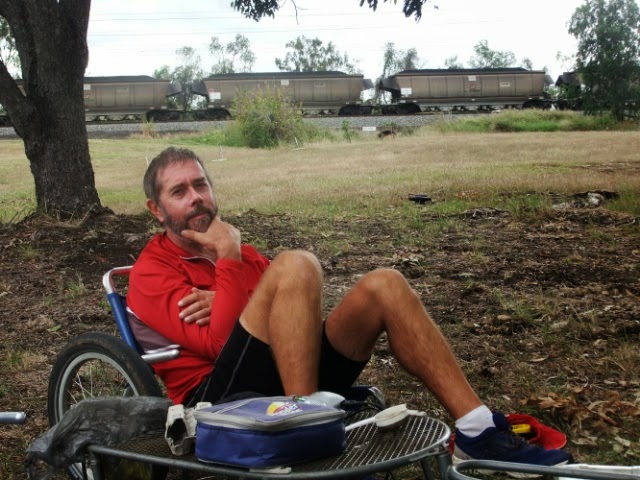 So we timed between trains (whether they are full or not) and there was a cycle ... one would be at 17 past the hour and another at 37 past the hour so every 40mins then another at 20mins.  We wonder if they will be going all night?  The trains aren't as long as the Nebo ones and they don't seem to be as busy as that line.
Here is our campspot ... 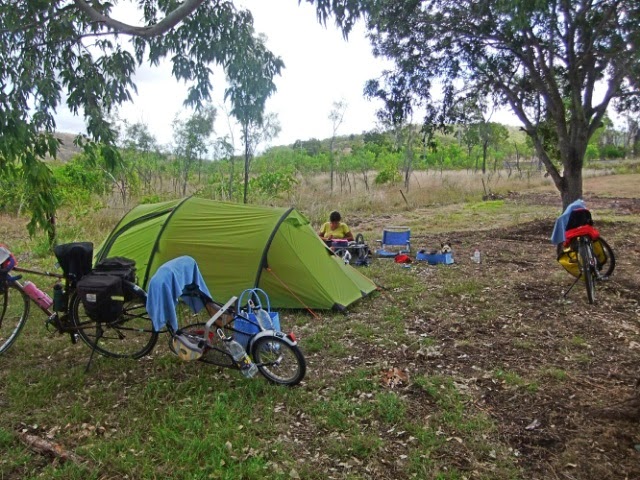 Tomorrow we continue to Duaringa - which has a massive free camp area with hot showers (gold coin donation) and toilets.  Last time we stayed here it was crowded but it has a huge area and even a small area where we can pitch the tent!
Posted by Janet O'Brien at 3:25 PM