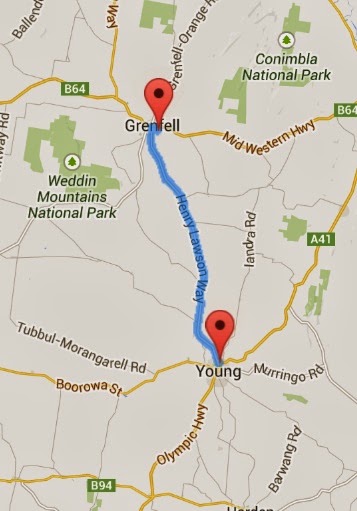 We had a wee sleep in this morning since it is only 50km to Grenfell, we decided that we won't have a rest day at Young since it is so expensive and also Neil didn't like the manager (he was bit of a winger about everything and anything!)  So we decided to chance it at Grenfell.
We ducked into Aldi to get a few bits and pieces and then there is a steep climb out of Young along the Henry Lawson Way.  Let's just say that the traffic had to wait for us when they wanted to join us on the main road!  It was quite steep and winding.  It is about a 1.5km climb to get out and then a great downhill, the road is still bad but after around 5km the road became dare I say it ... perfect.  It was in such good condition I couldn't believe it and thought maybe we had crossed back into Victoria!!!
It was up and down to Grenfell especially the last 15km but the legs were okay.  The scenery around this area is beautiful ... very similar to the area around Birregarra.  I forgot to mention that from Coolamon the area is very lush and green ... so green it hurts your eyes!  There obviously has been quite a lot of rain even over summer as the area beside the road is very lush and green and it is not new green grass as it is long and hasn't been mown.
We had a cuppa about 15km out and we noticed that along side the road there was heaps of fallen gum branches (huge ones too) and you could see that they had fallen on the road and were moved off with heavy machinery so there may had been a big wind storm through here recently as most of the branches had fallen off and a only a few had been chainsawed off.  It was like this until Grenfell.
Now Grenfell is famous for 2 things - the first is that it is the birth place of Henry Lawson the famous Australian poet and the second is the bushranger Ben Hall sort of hung around here - I think he may have been involved in the biggest gold robbery.  The area around here must be also be old gold fields.
We will have a rest day here tomorrow and may make an effort to back track and see the memorial where Henry Lawson was born.
The campground is nice and we are tucked in the corner.  There is a bbq but no kitchen but that is okay ... here is the tent ...

since we were here early afternoon and it is warm and sunny we decided to give Kouta a wash as he stinks and it can be difficult at times in the tent sleeping with a smelly dog!!! he hates his wash .... 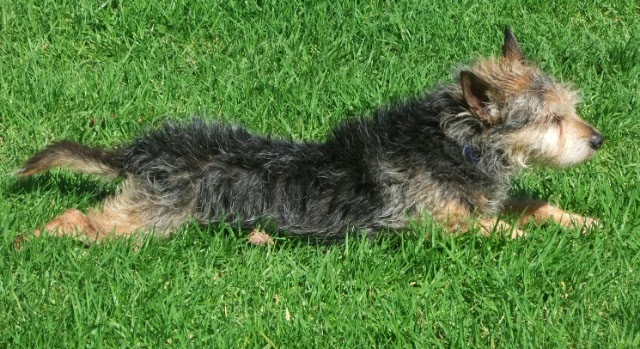 so he is doing his commando crawl trying to dry himself off.
Back into cycling on Wednesday.
Posted by Janet O'Brien at 4:50 PM