I tell you if we thought yesterday was tough then today although not as tough but looooooooooong!  I didn't realise Corowa was that far away from Cobram ... I forgot to add the distance thru Barooga when do the kms each day.  Never mind we are here now.
It was a pleasant nights sleep although I did wake a few times paranoid that locals were going to come and hassle us ... I don't know why as we are a few kms from town and also in the better part of town so they don't tend to let hoodlums come in their area ... they let us travellers as they can't see us in the thick of the bush!
I did hear a kangaroo bound pass us and hoped like hell it has seen us as we are not usually there and he/she would have been suprised to see our little tent there!
The morning was nice and sunny and throughout the day it was not hot like the previous day, the winds had died down considerably and had become a very light south westerly ... so that helped us a little bit.
Since the past few days we have had heaps of sun I have taken to putting one of the solar panels on the front of my bike to charge up the battery pack that we carry ... it takes ages to charge up fully by sun and also sometimes we can have intermittent sun as we get shaded by trees along the road side ... here it is on the bike ... 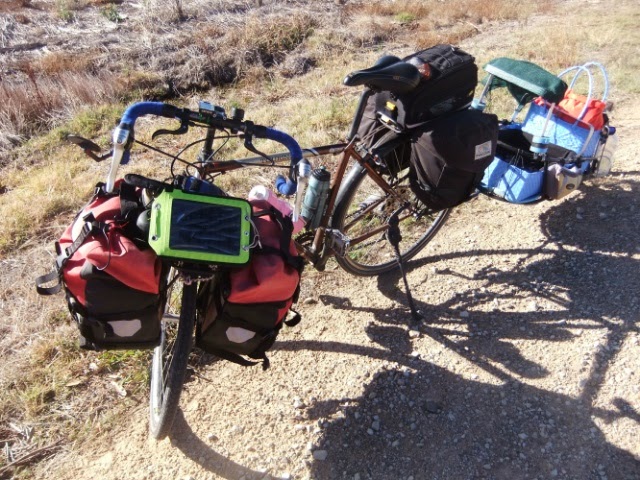 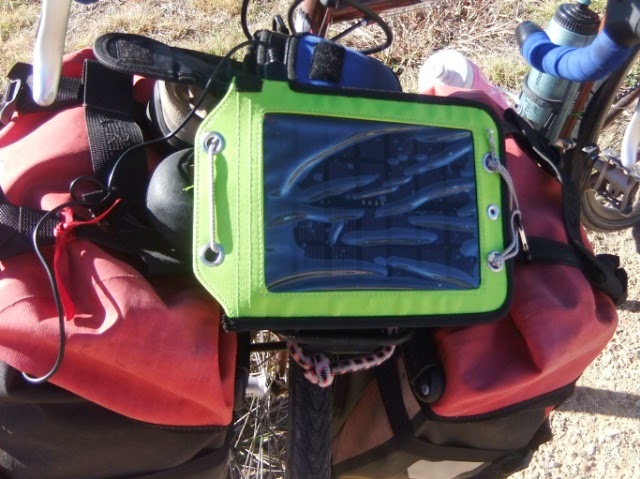 The road from Cobram to Mulwala is lovely and quiet and very little traffic.  We had a lovely coffee spot at Lake Mulwala ... 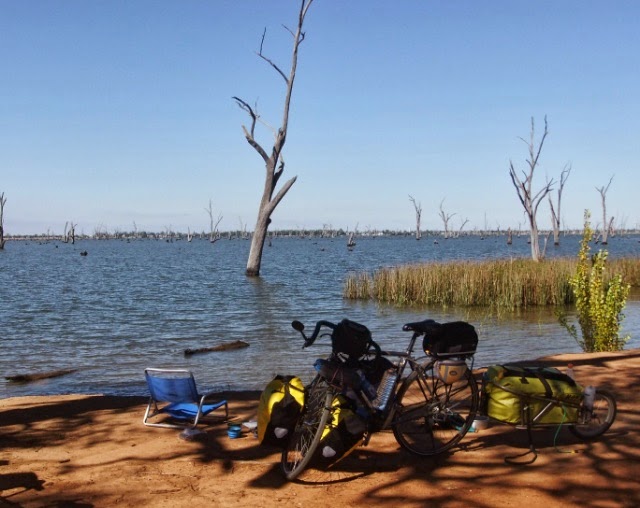 we had it all to ourselves until I decide that I have to go to the toilet in the bush and what do you know 2 damn carloads turn up .... can you believe that!  so the toilet pit stop had to wait until further up the road!
The road from Mulwala to Corowa was busier than the morning road but pleasant enough.  We are on the NSW side and so the road surface tends to be made up of the chunkier gravel so it is lumpy and bumpy for us and over the course of the afternoon we both find that the small vibrations from the road surface make our hands a wee bit numb so we are constantly shaking them.  Over the last 15km we are both feeling it .... not so much in the legs but in the upper body so much that we are relieved to get to Corowa around 2pm which is pretty good.  We stock up on food at the Woolies there and head to the campground.  We were expecting to pay alot for unpowered on the Murray but it is ony $20.  It is a huge park full of permanent holiday vans etc so I suppose they subsidise us!  Not many at the park and we choose the tent area near the cricket ground as it is in shade a fair amount of the day (since we are staying here tomorrow) compared to the last time we stayed here which is on the other side of the park nearer to the camp kitchen (which has toaster, jug, fridge and sink) but we are not far from the bbq which is $1 - I can bear that since the camping is so cheap and also Neil found $1 the other day!!!
Tomorrow we will take a look around ... the town strip is full of old buildings and it is quite a lovely town.