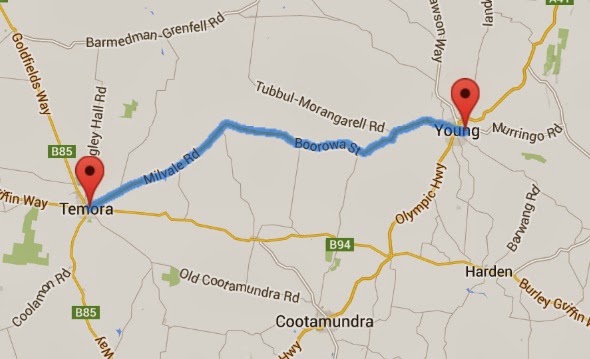 What a day! But before I start to describe this day I would just like to say that Neil also said this was a tough day ... so me having a winge about the roads is a true reflection of how Neil felt!
We decided that we might try and leave a little earlier today in the hope to get here before the Geelong vs. Brisbane game starts (ya dreaming Jonesy!)  So we get up at 6am and it is pitch black outside so we have brekky in the laundry.  We are ready to go by 7.30am and there is a light fog here in the town so we ride out of Temora and at about 3km out we notice that the fog is getting thicker and we are having trouble seeing through the sunnies so of they come and then it is still getting thicker and every 20m I have to wipe my glasses as I am having alot of trouble seeing at all!  I am thinking that we may have to pull over and sit this out but it is 8am in the morning and there is no one around except for the odd car which is driving almost as slow as what we are cycling because they too are having trouble with the fog.  To show you just how thick the fog way I took this photo and Neil is about 50m away from me ... 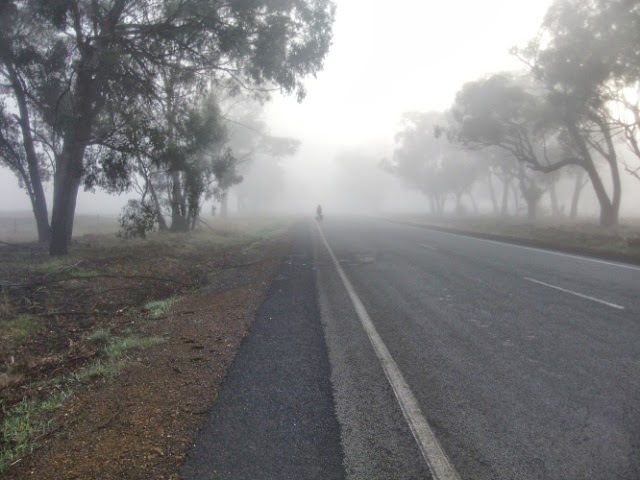 by 9am the fog was gone to reveal a very sunny day.  I had a look at the profile for today and saw that it was a long 80km day with a very gradual incline to  2 very sharp hills towards the end.  So it was very picturesque riding today along relatively flat land.  You really didn't notice the slight change in terrain until past Grogan which was about 30km out and then shit really hit the fan from then on (if you pardon the expression!)  After Grogan you change into the Young shire (previously you were in the Temora shire) and I tell you Neil had a good ole winge about the road when we got to Millvale 10km later.
Even I was shocked to here Neil complain and I must admit the road was pretty broken up and I actually wonder why they even bothered to seal the road at all as I am sure we have been on smoother unsealed roads! I wouldn't say this is a back road at all, although the traffic was light this morning (it picked up later on but not too bad) being a Sunday, I would imagine that this would be a well travelled road during the weekdays.
So after a cuppa at Millvale the road did not improve at all, in fact it just got worse.  By 60km we started to really climb but not before we came across something different, something unusual ... what is wrong with this photo? 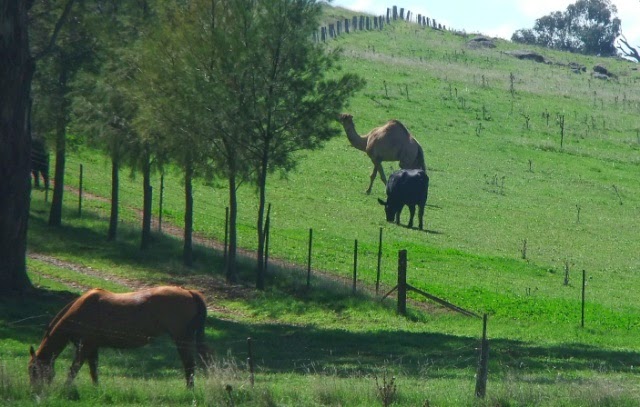 bearing in mind we are in country NSW ... not outback Northern Territory ... yes you are not seeing things, in the paddock with the cattle is one of these ... 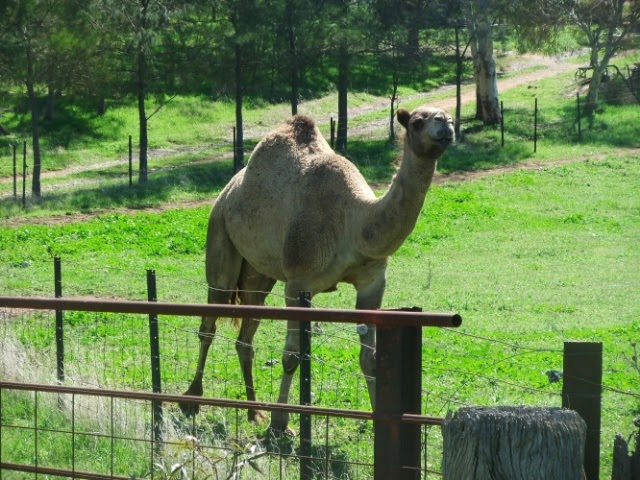 LOL, at first we saw one in another field and then we went behind a tree and couldn't see it again so I thought I may have been seeing things and then we realised the camel had sat down so we couldn't take his photo and then we saw this one in another field ... it saw us when we stopped so it came over to the fenceline.
From here we had a munter of a sooty grunter of a hill - the road conditions were not helping us either.  about 5km later (67km mark) we are at the top and we go down for another 6km only to have a nasty short and sharp hill just before entering Young.  Once in town we had to contend with the shitty roads still and also traffic and also the fact that we didn't know where to go exactly!
We eventually find the campground which is opposite Aldi which has made Neils day and he is happy as Larry.  The campground has a kitchen but is expensive due to the fact that when the cherries are in season the seasonal workers come in so basically it is like Tongala they can charge what they want.
So I forgot to mention that Young is the cherry capital of Australia but what suprised me was that I didn't see one cherry tree on our way in so I am not sure where all the farms are ... I do have a theory that the cherries are secretly imported from South America and they repackage them here!
Since this is such an expensive park we are moving on to Grenfell tomorrow and will have a rest day there on Tuesday.
Posted by Janet O'Brien at 4:59 PM