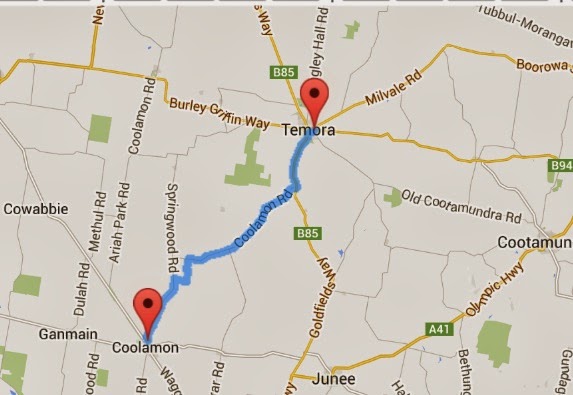 Well after a couple of rest days at Coolamon we were ready to go this morning.  But first I went for a wee walk around Coolamon yesterday.  It is a small town not far from Wagga Wagga so there is a great deal of new housing (again because it is not far to travel from work and the housing would be cheaper compared to Wagga Wagga).  The town itself is old buildings and they are well kept.  The most famous building is the 'Up to date' store ...

which has been preserved and I think is open for the public to view.  The street is divided by a green strip and this is the view of one side of the street ... 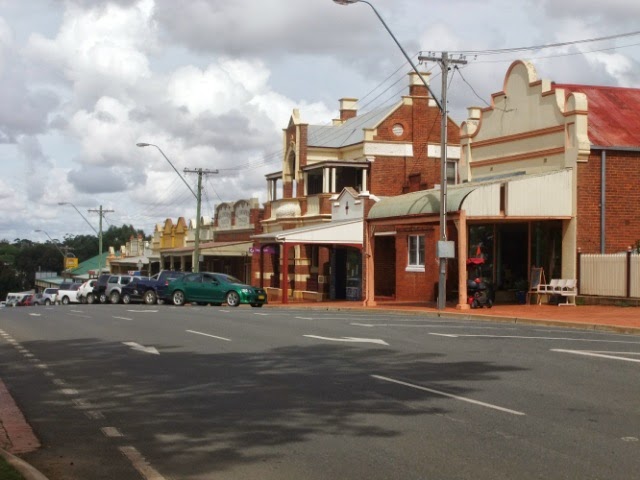 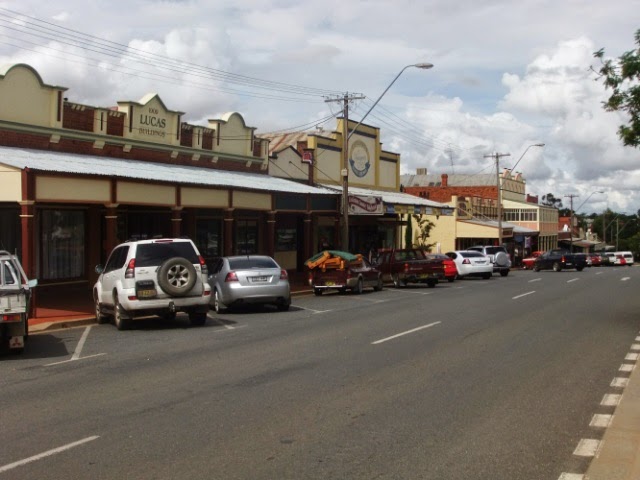 I think that if I have to live in NSW this would be my ideal town.
This morning we woke to a thick heavy fog so the tent was wet again.  We decided that we would still pack up to leave and if we have to wait out the fog then we will.  So we had our brekky and began packing up ... in the process of packing up one of the older travellers decides to voice his opinion about us riding in the fog.  I don't know what possessed him to just dive in and say that we shouldn't ride in this fog as car drivers like him can't see us and we should be in bright yellow with flashing lights etc.  Why he just assumed that we don't have bright colours etc (I am wearing a black polyprop since it is a little cool so he assumed this is how I ride).  Neil did not take too kindly to the way this guy just thought that we were idiots when it came to fog and we have no idea.  So I continue on merrily packing leaving it too Neil.  Now Neil doesn't believe that he should explain himself to anyone that doesn't cycle tour so he doesn't to this old guy.  Eventually this guy gets the message that we don't want to chat and moves on.  Eventually the fog begins to lift and it really warms up and off come the layers ... here I am with my bright orange/salmon colour shirt .... if you can't see me in this then you shouldn't be on the road driving and Neil is in his bright red shirt.  I roll up my Treadly neck flap to reveal a small red flashing light at the back of my helmet but it is to bright a day for it to be effective.  I think the old man had to eat humble pie when he realised that we are not novices at this and we are most definitely not idiots when it comes to our own safety on the roads .... I think we can judge for ourselves!
I think I have said this before but people wait to chat to us and take photos always when we are ready to leave ... never while packing so this delays us ... they all want to take photos of Kouta in the trailer!
So on our merry way up the road to what looks like to be a bright clear day as the fog really lifts.  Riding along we come across this shed in the middle of nowhere ... we love the name ...

I remember while riding on our wet Wednesday seeing some sign with the name Berry Jerry and I thought what a funny name but thought nothing of it ... but to see it north of Coolamon again we had to take a photo ... even Neil liked the name.
So about 18km out of rather lovely flattish riding we take the Temora turnoff.  The road is extrememly quiet again and quite wide, very little houses along here but plenty of hills to climb .... not big ones just undulations that sometimes are steep ... I had to laugh as this road is just typical of NSW - they find the steepest part of the hill and put the road on it! and they suck you into this false sense of 'oh this is an easy hill' by making it gradual at first and then they slug you with a short sharp steep bit at the end ... nasty!
One thing riding along in these country back roads is you get to see some great letter boxes.  I remember on a past tour I saw an old fridge that was one, sometimes farmers will use old microwaves, the most common is a sheep dip container with a bit cut out for an opening, ones that use old milk containers are a bit more creative than the sheep dip containers but this one today is probably the best so far ... 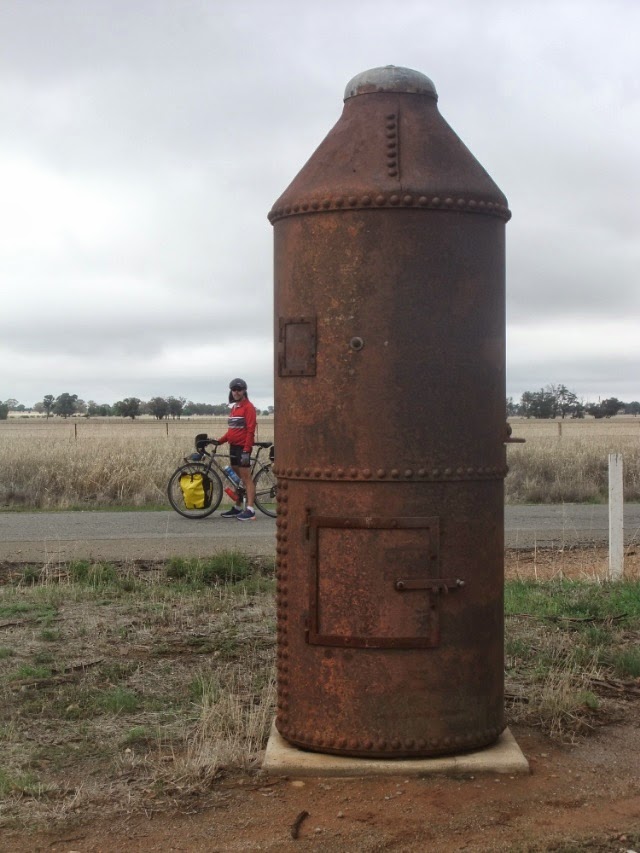 I could be wrong but I think it is an old bomb shell casing (empty I hope!)  I just loved it!
At about the 47km mark we join up with the Goldfields highway and are a expecting a little more traffice but were pleasantly suprised that most of the traffic was going in the Junee - Wagga Wagga direction and very little was with us.  We stayed on this highway until Temora.
This caravan park is the council one and is about 2km before the town itself but it is cheap and clean.
The owner of the 5th wheeler below came over for a chat  and Neil just had to ask how much it cost for the whole get up and he states around $300,000 4 years ago and that is for the 5th wheeler and also the big ute that you have to have to tow it and it only gets 5km to the litre of fuel on a good day! 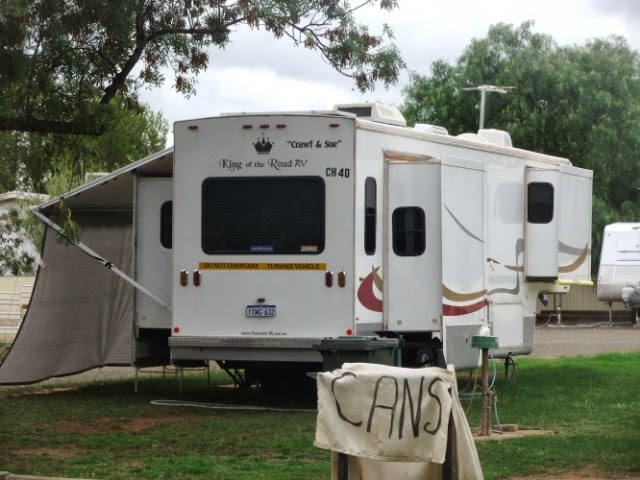 this is basically their home on wheels - it has everything in it and the sides as you can see pop out to give more room inside.
Tomorrow is a big day to Young - 80km and we will get up early so that we can arrive before the Geelong - Brisbane game ... Neil has bought the AFL app so we can watch Geelong play ... not sure if we will make the 1.10 kickoff but we think that is Queensland time so it should be 2.10 NSW time.
Posted by Janet O'Brien at 5:08 PM