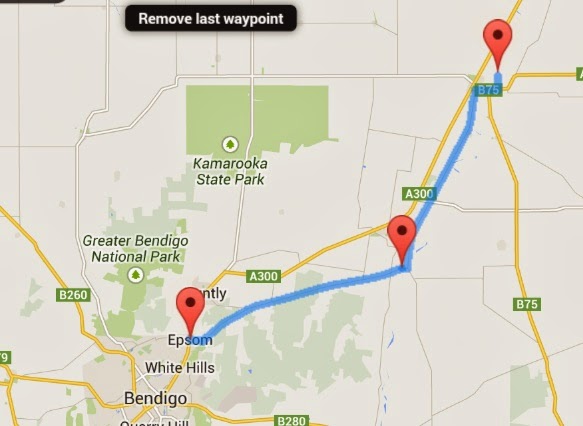 Well we are on the road again!  Day 1 of many more to come!  We haven't toured in nearly a year and I sure felt it in the legs today!
We spent last Friday packing up the bikes at home ...

Over the break since Pitcairn Island I made Kouta a little basket for his pet basket in the trailer.  It is made from woven pallet stapping and it is for when he has a little accident and we can't clean his soft basket ... this way he still has something to sit in until we can get a new basket, in the past he has had many an incident in his baskets!  I also wove a basket for the tent to sit in the trailer and also double up as our shopping basket and for when we go and have a shower ...  so the trailer is looking nice and co-ordinated! 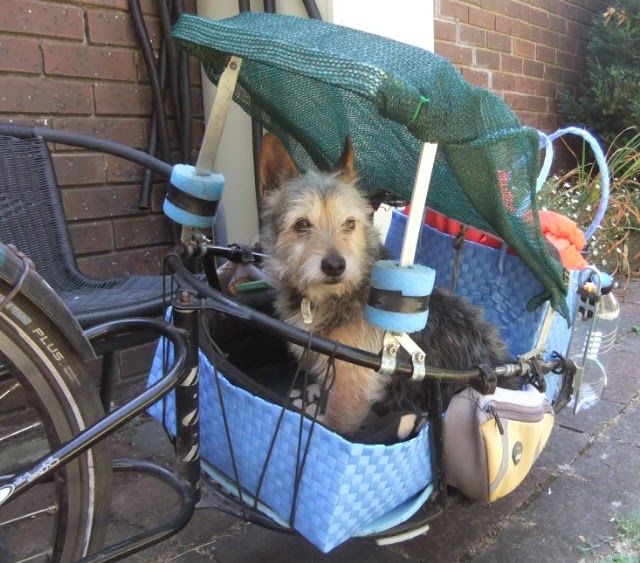 Okay so Neil drove Kouta and all the gear (except the bikes) up to Bendigo, Kouta stayed the night there while Neil drove back.  Neil and I caught the train to Bendigo on Sunday ... apparently Kouta sulked a fair bit Saturday and Sunday morning and even didn't eat his chickent bone and sort of had anxiety / fear of dessertion / crikey they have dumped me again and gone off syndrome but upon our arrival he perked up at the sight of us and followed us everywhere.
He was extrememly happy Monday morning when we put him in the trailer and took off.
The ride out of Epsom along the Epsom-Barnadown road was nice ... a bit busy due to the time 8.45am but after about an hour the traffic eased off both ways.  It is relatively downish for the first few kms and then flat ... the biggest hill is out of Leannes street!
Along this road we had a cross tailwind so that was nice but as soon as we turned north along the Elmore - barnadown road we had a cross head wind!  We had this all the way to Elmore and Aysons reserve (30km further on).
Knowing we were going to have this cross head wind we braced ourselves for it but it wasn't too bad, strong but more coming across us and blowing me into the middle of the lane.  We took plenty of breaks along the way ... 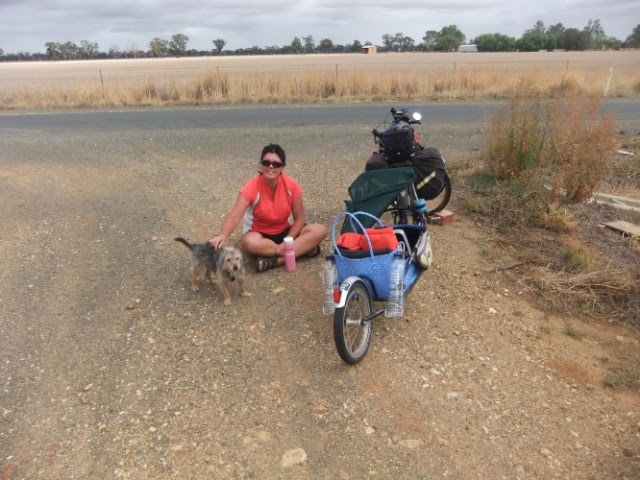 at this stop we had a few arrowroot biscuits ... oh they were delicious!  At around 11am we had a few scattery showers, nothing really got overly wet (not even the dog!) but the wind was certainly strong.  By the time we got to Elmore to fill up on some water the showers had passed, still windy but warmish.  Filled up with water and headed out to Aysons reserve which is another 9km further from Elmore.  It has been 4 years since we have last been here and last time it was a stinker of a hot day in comparison to today which is relatively cool but pleasant.  We rock up here and there are quite a few other vans .... some look like they have been here for a while.  The only facilities here are a block of toilets with non potable water.  So we go right to the other end (a 5 min walk to the toilet ... best I don't misjudge when I need to go to the toilet as it is a looooooooooooooooooong way to get to them!)  Neil counted there are around 27 others just in this block and not counting the ones in the other block.  It is a lovely spot beside the Campaspe river.
We did go for a wash in the river to get rid of the excess grime and sweat ... the water is warmish but not too cold that you squeal when getting in it!  The river is up but not flowing fast, it is somewhat bracing when you come up due to the wind ... if it was a hot day it would be better so it is a quick run up to the tent to dry off and into clean clothes!
Here is our site with our new tent ... 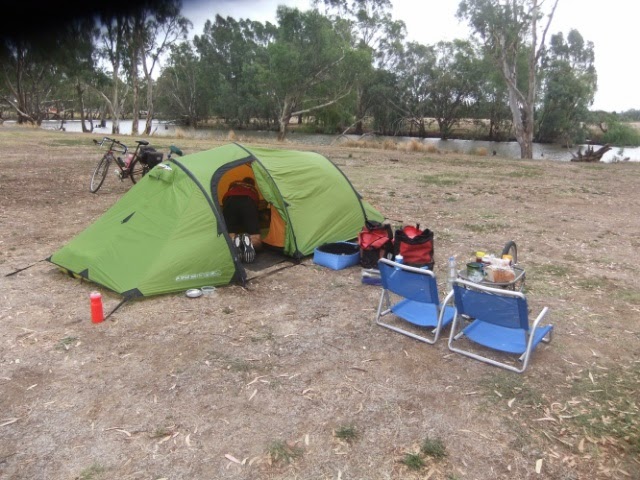 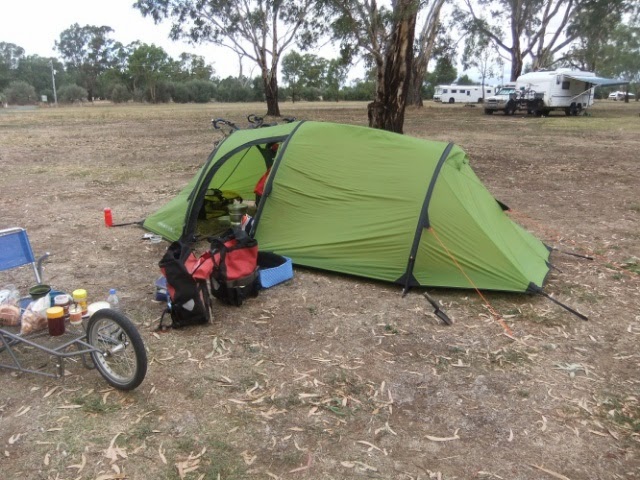 it is a huge tent ... in fact it is our studio apartment with an annexe!  Which is great for cooking when it is windy or raining ... 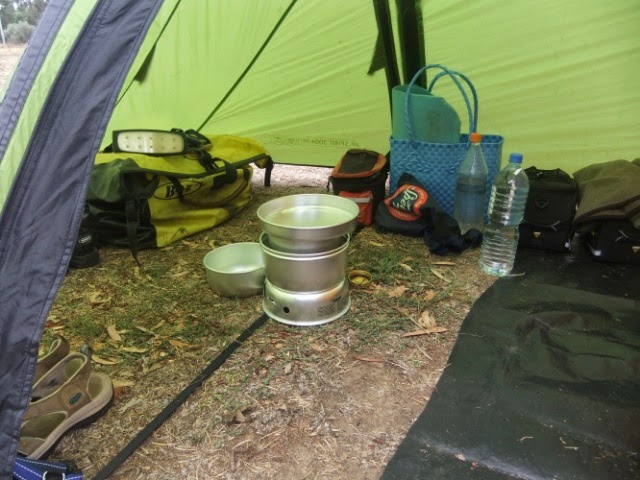 Once the tent was up Kouta was in and on the mats (as it is softer), probably not as much room in the sleeping area as what there use to be but enough for the 3 of us ... 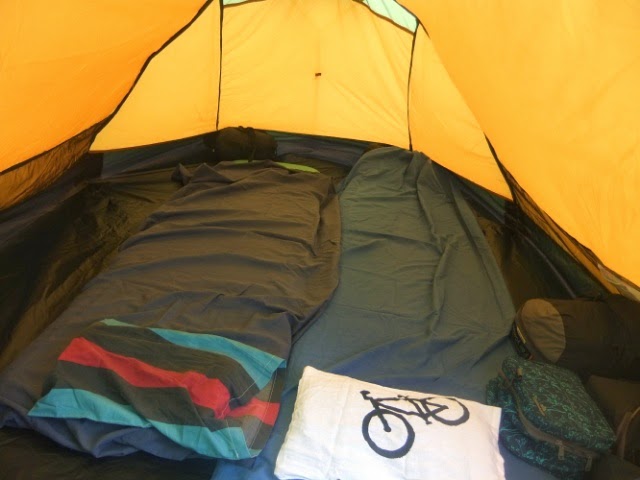 How about that pillow slip of Neils .... isn't it cool, pity it is white and I will take a photo of it later on in the trip to see if it is still that white ... thanks Sharon for printing it for neil and Flo for making the tea towel into a pillow slip!!!
Tonights dinner is some indian type meal out of a packet and rice, although dessert is Leanne and Russells' strawberries from their garden and yoghurt.
Tomorrow we got to Tongala via Rochester where I am going to pick up a packet of crackers and cheese so that when we get to Tongala we can have the lovely sundried (via the oven) tomatoes that Leanne and Russell made and gave us for the journey .... they are going to be delicious!
Til then happy cycling.
Posted by Janet O'Brien at 3:48 PM