What a day yesterday (Friday) ... I think the island will be glad to see the back of the O'Brien clan!  Sharon, Lea Ann and Mum decided to walk to St Pauls - which if you remember is the place where Neil and I visited and the ocean was very rough and crashing up and into the local swimming pool and the 2nd visit was clam enough to swim in ... well all 3 get there and it was like our first visit there - rough with spectacular waves crashing in.  At the base of the stairs you have the option to stay put and watch or climb out onto the rocks to peak around the corner to see the pinacles where the waves come in ... they decide to go there and some how Mum manages to fall and graze her arm badly, so Sharon runs back part of the way to the Duncan (toilet) at Down Rope where there is a first aid kit, while there Bradley and Emily and the little goat are trotting along to St Pauls, so Sharon completely out of breath tells them the Mum has had a fall and that she is okay and this is where we are not quite sure what was said but Emily ends up running back to the chalet to Neil and I and tells us the Cena has had a fall of course she was out of breath and there seems to be some urgency in her voice and she explains that Sharon said about the fall and we try to ascertain if Cena has hurt her arm or leg but Emily is unsure. So we run down to Mike and Brendas and he gets on radio informing that he needs the stretcher and then with the stretcher has to come able body men as they may have to carry Mum up from the base of the stairs.  So next then you know there are quad bikes starting up all over the island and heading towards St Pauls, Neil and Mike make there way, Brenda comes back unloads her gear and takes off again, meanwhile we wait with all the kids at Brendas place.  After 20 minutes Neil and Mike come back saying that it is just a graze on the arm!  We all chuckle as Mum would be fuming that everyone has come to her rescue.
Poor Bradley and Emily they feel bad and are worried they got it all wrong and did the wrong thing by raising the alarm so I tell them no they did a brilliant job and did exactly the right thing and begin to explain to them that when information is limited you always prepare for the worse case scenario and in this case we prepared for a leg injury and a carry out scenario.  They seem content with that and over time when everyone said to them basically the same thing they accepted it.  Another thing about these 2 kids is that they made an excellent decision while running back - they assessed their situation - the 2 of them and a baby goat, so together they made the decision that of the 2 Emily is the faster so she should run ahead and raise the alarm while Bradley ran along with the goat as it was slowing them down ... now how mature is that decision made by a 9 and 12 year old!  when the 2 kids told us that storey everyone made sure they went up to them to congratulate them on a mature and correct decision.
So Mum is okay so in Brendas house when have Dad with a dislocated arm, Mum with a long graze up her arm and Brenda is hopping around with a bad corky to her thigh (some the water tank lids fell on her leg the other day!)  I tell you it is like a rest home down there!
In saying that we have renamed a few of the spots on the island - The Landing (where dad slipped) is now known as 'Philips Slip' and St Pauls (where mum fell) is now known as 'Cena bussa ass' - Brenda came up with that one ... basically 'Cena busted her ass' which is the island way of saying fell over!
So in the afternoon we took Mum down to Issacs Rocks (she only had a few rocks to scramble over!) 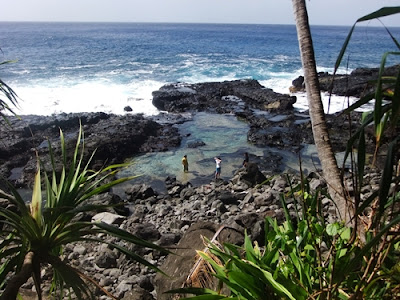 It is a lovely place to swim and is a great alternative to St Pauls, So Neil, Bradley, Kimi and Tureka jump in while I sit with Mum on the rocks ... it is not long until the waves start crashing in ... 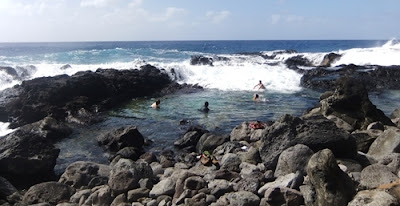 it comes in washes over the first person (Neil) 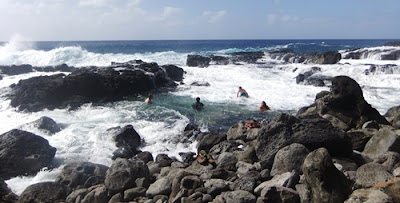 catiches Tureka and then another wave has come through from the other direction to catch Bradley and Kimi! 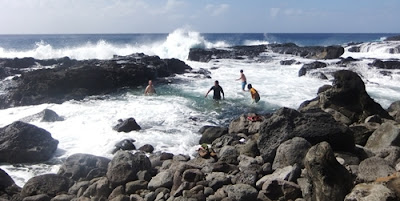 soon it is like a huge washing machine ... but safe!  The photo below is what it is like without the rough seas crashing in! 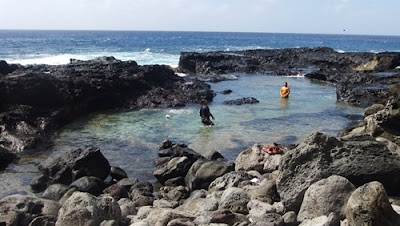 lovely aye!
After that we start heading over to the historic site of Thursday October Christians home and we pass the local jail ... 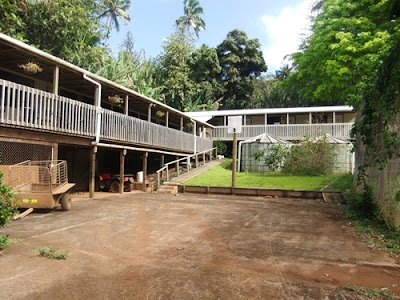 the cells are the ones straight ahead behind the water tanks.  To the left is now used as offices for the tourist dept and soon to be a curio co-op I think. 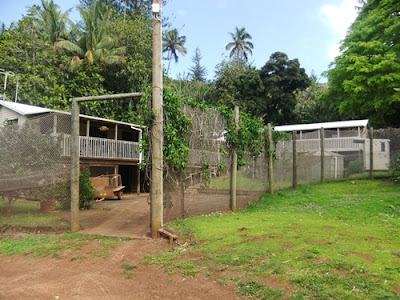 The outside fence isn't exactly maximum security!
Just on from there is where Thursday October (Fletcher Christians son) had is homestead which was pulled down about 10 years ago as it was falling down but the foundation stones still remain 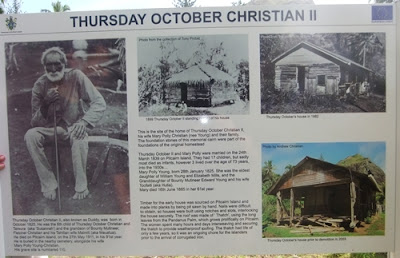 Last night was dinner at Steve and Olives .. and guess what we tried ... goat! they cooked it in 2 ways - roast and boiled ... personally as a vegetarian (but not strict!) I prefered the boiled way as it was lovely and tender.  Not as gamey as I thought it would be (that would be because they chose a young goat - 10 months old) ... I tell you island food is definitely fattening!
Posted by Janet O'Brien at 4:04 AM