This morning we woke and the sister ship to the MV Claymore, the Braveheart, had arrived sometime during the night.  It was carrying a few of the locals who had spent the past 2 months on Henderson Island (one of the islands in the group of Pitcairn Islands) irradicating rats in conjunction with some wildlife group (which had previously failed so this is the 2nd attempt). 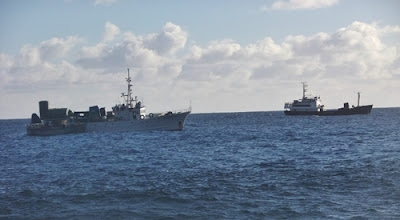 The Braveheart is considerbly smaller than the Claymore, it is marginally longer than 2 longerboats end to end! 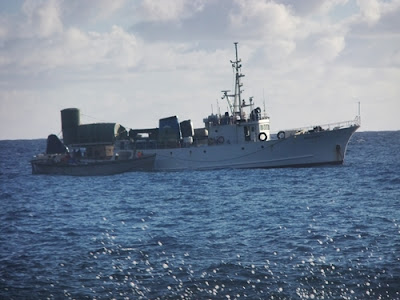 The turnaround to pick up passengers is very quick so we missed seeing them take the long boat out of the sheds and got down to the landing when they were coming back in, this photo is where the come into the jetty - the gap between the rocks and the jetty is quite narrow ... 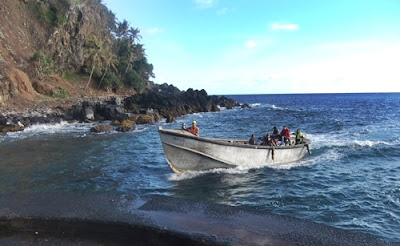 Once past the edge of the jetty they manouvre the long boat alongside the landing, unfortunately one of the passengers was holding on to the edge of the boat and as the long boat pulled up alongside the landing it scrapped it along with her hand ... I think she was in alot of pain!
There is a team effort to unload the luggage by both hand and a crane (a pile of junk was in a net and that was lifted by the crane) 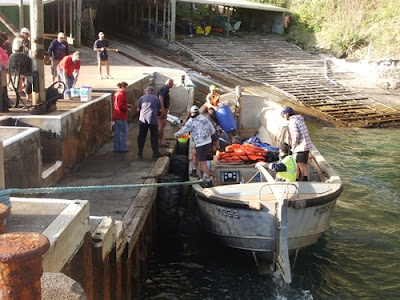 ﻿
Henderson Island, where they went, is an uninhabited island so they must have lived in a tent and had taken everything with them so when they came back they had containers, plastic bags etc, heaps of stuff but I suppose they also had to bring back their rubbish. 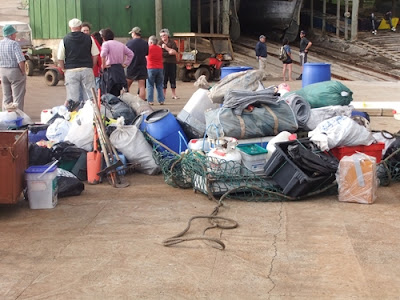 After visiting the landing we went back down to the Store and Curio market, a few of the locals had their wares out, mainly carvings and t shirts, I had a big spend up there! (it is important to keep the local econonmy alive!).  Here is a photo of Mum with Kerry (my cousin) 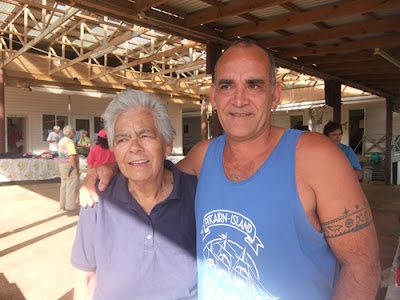 After the market we went in to the museum, which was full of bounty stuff and bits and pieces.  The museum is just up from where Mavis lives so we stopped and chatted to them as Nola and Reynold where also there (they come back on the boat to Tauranga with us) 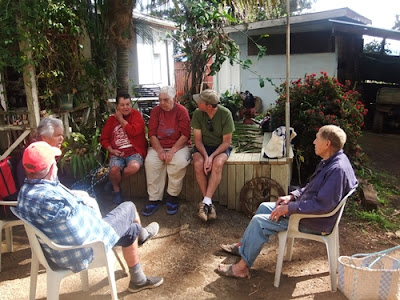 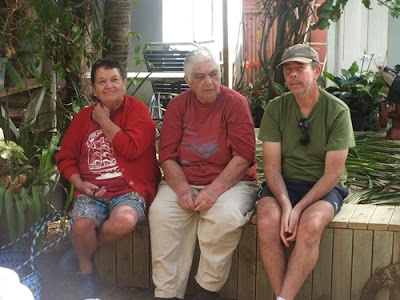 now Mavis has taken a real shine to Neil and loves his sense of humour!  Mavis is a distant cousin of mine, can't remember how as this is one confusing island when it comes to who is related to who.  Now if I am right Merralda is the daughter of Mavis and she also lives here so when she finished at the curio market (she makes spectacular tapas) she came back home and took us on a tour of the house.
In the garden not far from where we sat are 2 items from the bounty - first the bell 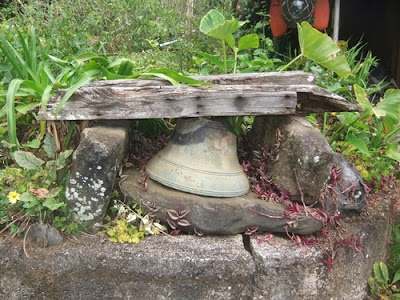 and then a ballist (spelling?) from the bounty 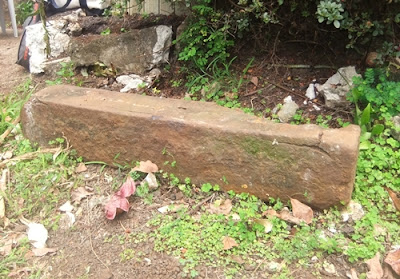 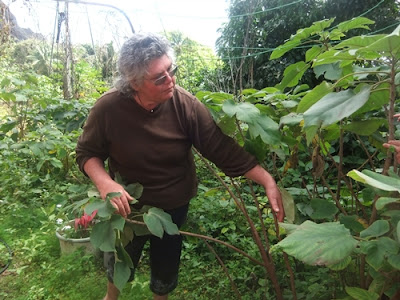 she then took us inside to show her stone oven ... 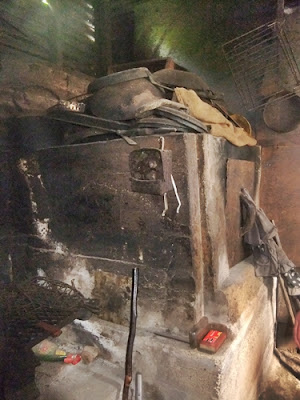 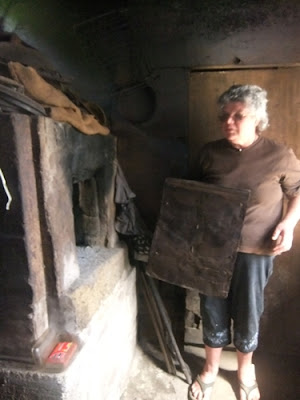 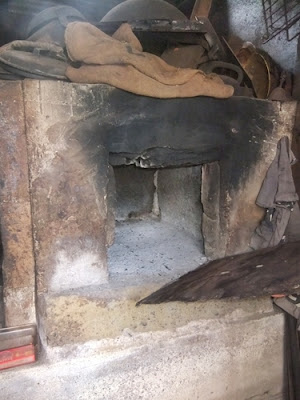 I think quite a few islanders still use a wood stove or stone oven (similar things really).  Merralda does alot of preserving and drying of stuff and only yesterday she had preserved some tuna (probably the equivalent to tinned tuna!) and is better than the canned stuff.  Basically they put the tuna in a preserving jar with vinegar and salt and then boil it in a pot (the jar is in the pot) for 2 hours ... 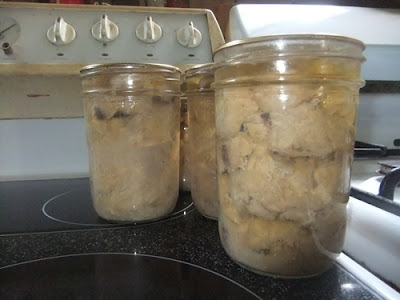 she also dries banana, papaya (paw paw) and coconut in protected nets on her roof and this is then packaged up and sent to Poland where she has a niche market there.  In fact I think she does quite well out of a niche market for her tapa drawings, dried fruit and soap and coconut oil.  Mind you her soap is made by Cousin Kerry but made on behalf for her.
After lunch we decide to go for a swim down the landing again in the hope that we would spot the turtles (as there has been sightings of them in the afternoon but no one has yet managed to get a photo of them as they are quick!).
As soon as we got there they were there 2 of them but they quickly left and I think a third one was there or one of the original 2 had returned only to quickly leave again!  But I did manage to get a shot of one (the smaller one) 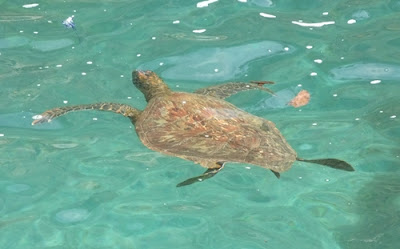 it was probably 1 and half the size of little Kouta!
Also with the turtles was blue bottles so they got the broom out and Kim got in his Kayak to collect most of them, once we thought the area was free of them we slowly got in (there was still one or 2!) out in the middle of the landing there was none so I hung around there in the hope the turtles would return.
Neil and Lea Ann put on their snorkels and mask and went a  looking  for the turtles and fish, while I swam with the kids who were diving for rocks that I threw.
After I got out the kids and Neil decide to jump of the jetty ... Turika and Bradley did these impressive big jumps from the highest part of the jetty ... 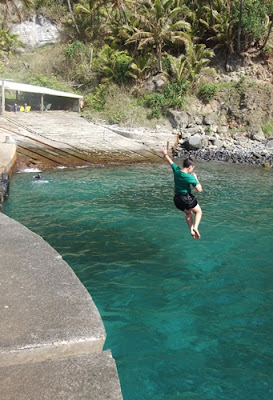 while Neil chickened out  and stayed on the lower level! 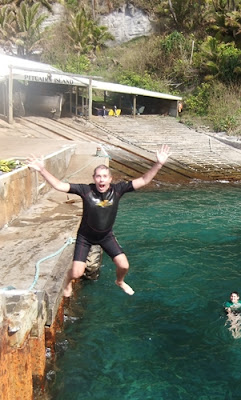 unfortunately they all had to keep repeating their jumps as we kept missing them in the camera!
While we were there Dad found, what he called, a genuine stainless steel bolt and he insisted it was from the bounty ... what do you think? 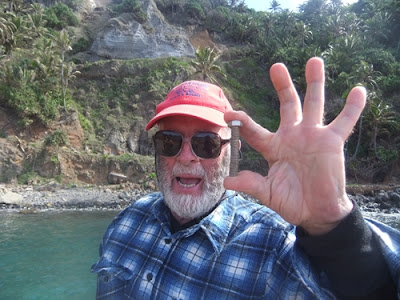 LOL - we joke that everything we find is from the bounty wreck!
Later on that evening the Claymore was returning back to Mangareva on its' passenger run, since I was cooking dinner I sent Neil back down to the Landing to video and photograph the departure ... he missed the long boats coming out of the shed but got the loading, out to the ship and then the long boats going back in the shed.
Here is the boat coming off the ramp and into the water (where we had previously been swimming!) this process is quite quick unlike the old days where they had no winch and no outboard motor and only a team of 14 rowers! 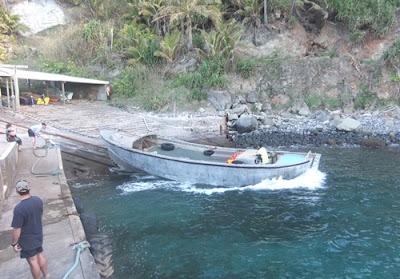 again the manual loading of luggage ... (everyone on the island is there) 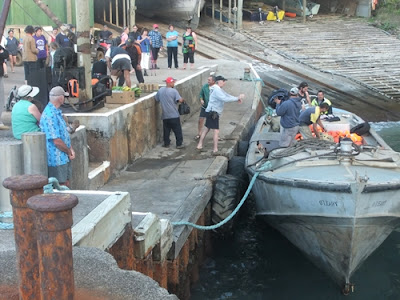 and here is the long boat going out to the Claymore ... (this will be us next Sunday)﻿ 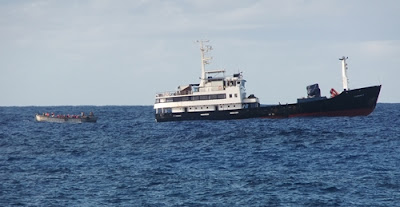