Oops I have missed a day … it has been full on I and have to admit that I may have had a bit of the ‘Pitcairn Way’ moment and procrastinated a bit and not done Tuesdays blog.
However not much happened on Tuesday, lets just say bit of a rest day since it was pouring with rain all Monday night and Tuesday morning so our planned outing to Tedside to see Ms T was cancelled.
Once the rained cleared and it was safe and dry enough to walk on the road we walked down to Steve and Olives for a cuppa and to admire buy one of Olives famous baskets.  The baskets are woven on the island in 2 ways – one with flaxen and another with plastic strapping.  Since Australia and NZ are very strict on products coming in we opted for the strong lasting plastic strapping baskets.  You would remember that I am beginning to make one myself … it is coming along nicely, I just need to make a button for my lid to hook over. On a side note since I started making this bag my fingers are ripped to shreads and are very tender around the quicks.
Olive is also famous for her cooking in, what she calls her ‘shitchen’ LOL
Here is some tomatoes being preserved 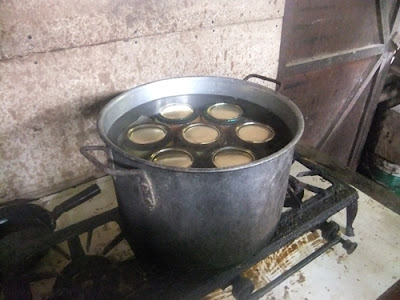 And Olive in her kitchen which is where she does all her deep frying – this family does a lot of deep frying, think about it so does Brenda and Len when they cook (so I am not loosing weight!) 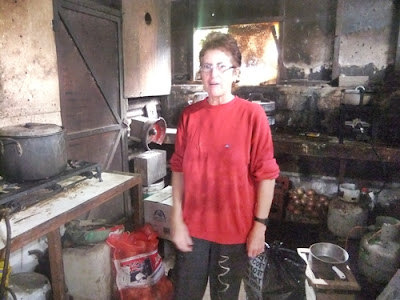 Here are a selection of baskets which she makes 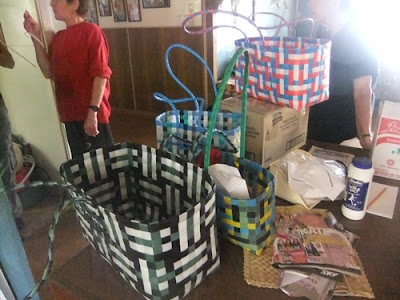 So after that we went down to the square where all the government offices are to see if we could get dads medical bill, fortunately you can pay in any money here so Dad got the bill in NZ dollars and it was then converted into US dollars. ($52.40 US) pretty good aye!  At the square we met Bradley who had been fishing with Lea Ann down at the landing and they were having a little competition – Lea Ann 2 and Bradley 4 so now Lea Ann has rechallenged Bradley and dragged me into it so we are going down to the Landing this afternoon to fish (she has promised to kill any fish that I might catch!)
This  is the Parrot fish Lea Ann caught (forgot the island name, I think they call it Opou) and then 5 Nanwe 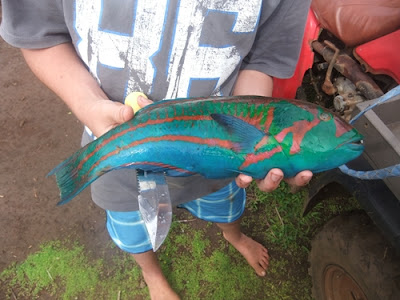 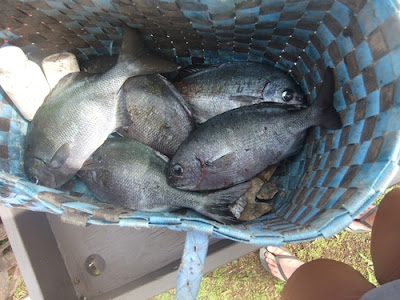 Wednesday – we woke to a lovely clear day perfect for a lengthy walk to Tedside to see Ms T and also encourage her out of her shell with bananas.  So first thing we did was chop down some bananas in the driveway 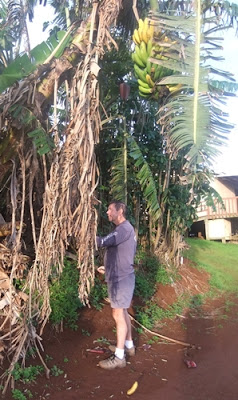 The ripe ones came away from the bunch but the green ones stayed – they are ripening on the veranda.  Here is Neil with his collection 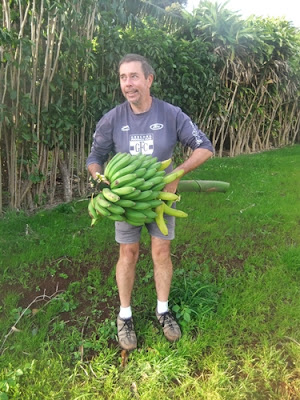 So we left early around 7.45am as we wanted to be back in time for Sea Scout Soccer at 2.30pm.


Although it hasn’t rained for 48 hours and the wind has been blowing to dry out the roads the clay still stuck to the bottom of the shoes, so much that it made your shoes heavier! 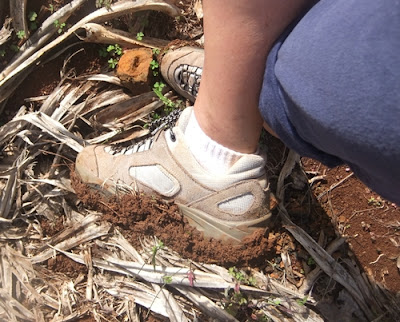 Speaking of shoes as you know the islanders rarely use shoes and Brenda may us the odd slip on but when she takes us out walking she doesn’t wear shoes at all.  Todays walk was to have a look at Water Valley via the coast line so we had to scramble over rocks and she just walks casually over the rocks in her bare feet carrying Izzy in her back pack! 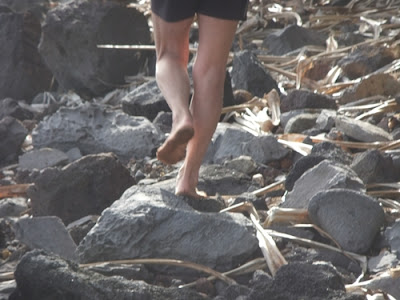 At the end of the rock walk we come to a cliff which is where the new road will go to the new harbour.  The cliff is soft so they will just create a siding and then the road continues through the other side and follows a valley so there will be no corners – that is why they can’t use the Tedside road – too steep and too many corners!
This is a photo of the natural harbour 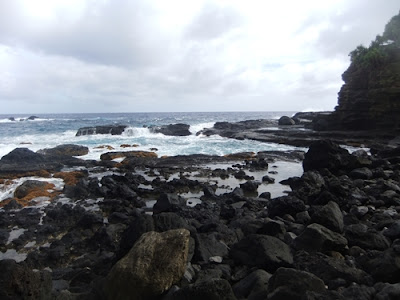 And basically where we were standing is where they will concrete to  make the landing.  The islanders are split on this decision to make the road and harbour but the money has been earmarked by the EU so the money has to be spent on making this harbour and landing.  The contentious issue that it is being built so more cruise ships will stop and there is an alternative for them to use either Tedside harbour or the existing Landing … but which ever harbour/landing they use if the seas are too rough at either harbour or landing they still have to get off the cruise boats the same way – the cruise boat drops their floating platform pontoon and the passengers walk on it to get into the cruise boat long boats – now if the seas are rough the captain of the cruise liner will not let the passengers get off – if the seas are rough at one harbour it doesn’t mean the seas are NOT rough at the Landing – KWIM?  Taking that logic I think it is a waste of money and it should be spent on getting a regular ferry from Mangareva to Pitcairn and do trading with Mangareva and also an easy spot for tourists to get to Pitcairn (like they do now with the Claymore)
This photo shows you the walk we had to do to get back to Tedside along the coast – see the long coconut tree where the land meets the sea? That is where we had to walk to to get back 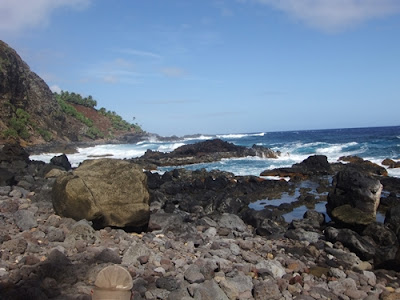 So we were all a little disappointed with the fact that we hadn’t seen Ms T so we walked back to the turnoff to have a look at Pulawana, while waiting there with Brenda and the kids 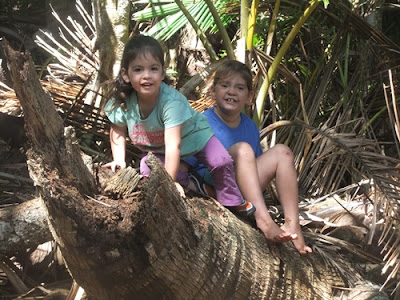 For Sharon we were just discussing Ms T and I spot her in amongst the Banana trees with her head out and as soon as I said that she comes waltzing out, obiviously she had heard the quad bike and us chatting and was walking quite fast (in tortoise speed) up to us, I tell Dad that I have a bag of bananas in my bag and to take them out and watching her she immediately saw Dad with the banana bag and made a ‘tortoise sprint’ towards him!
Here I am feeding her 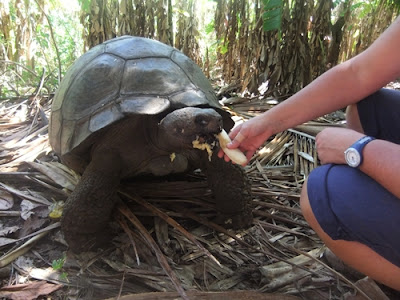 Now she has a very powerful lower jaw so you have to be careful towards the end of the banana that she doesn’t take your finger and once or twice my hand brushed the outside of her jaw and it felt very rough and slippery with banana! Feeding her and watching all the banana drop on her plate and smear around her lips and mouth you get the urge to reach out and wipe it clean like you do with a kid!
Here is a photo of her when Brenda teases her! 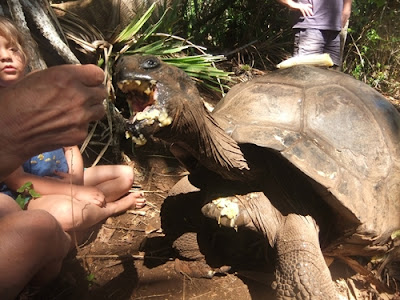 So after a lot of filming and photo taking eventually she clams up full of bananas and pops her head back in her shell, so we continue up to Pulawana … 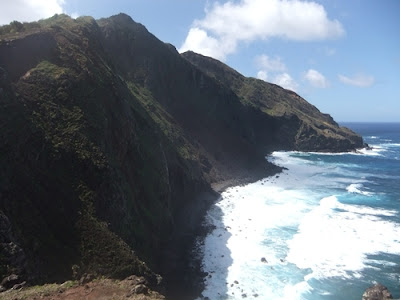 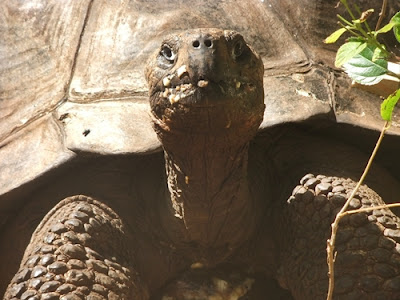 She soon pops it back in when we come closer 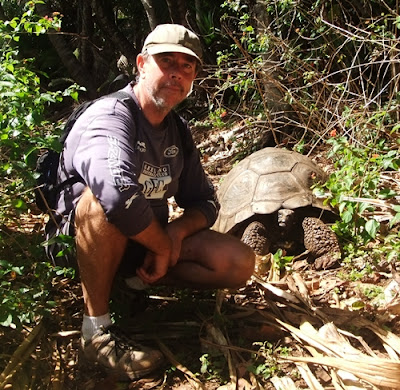 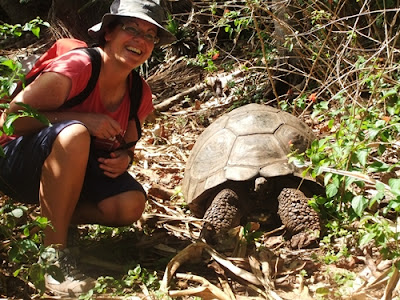 I am so glad we made the enormous walk/trek to see her as I don’t think I will get to see another one of these again!
So we start walking back up Tedside hill – this is probably the longest hill on the island and definitely one of the steepest in places.  On our way we come across a very very new born goat and its’ mother is no where to be seen (probably hiding because of us) so we continue on and it begins to follow 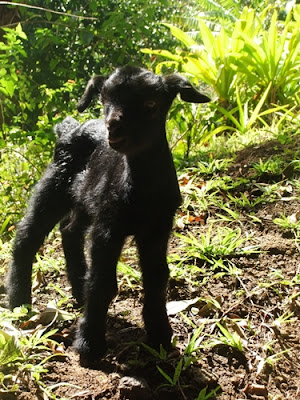 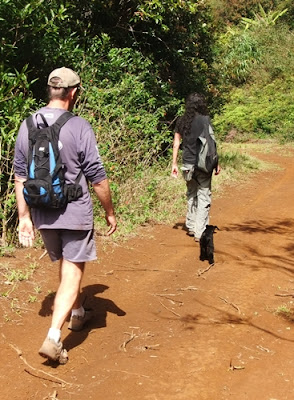 We get back home, have a quick lunch and rest and then it is off to Island Soccer with the Sea Scouts which is run by the current Police officer – Allan
Off course the game is too rough for the 3 musketeers so they play in the tree up by the tennis courts 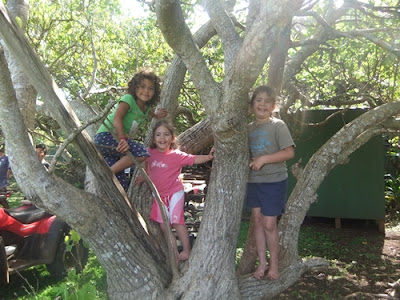 Now Neil and I think yeah it will be okay to play they will only play short halves … but no they play 2 full 40 minute halves … considering we had just done a 4 hour walk to Tedside and back we pulled up pretty well compared to the locals who didn’t walk!  The usual locals turned up – all the kids, all the outsiders - Pawl the island kids co-ordinator, Mike the social workers husband, Roger the school teachers husband, Allan the Police officer, Leslie the ex-commisioner, Sam the young woman who is here to monitor the island on behalf of the British government (basically to make sure the locals are held accountable to what they are doing!) Neil and I.  It was a great game …
Neil and I were on opposite teams and the predominantly girls team was winning for quite a while – when I was goalie I did let in one goal but that is because one of my players kicked it in the wrong direction and well above my head that I had to leap up and it grazed my fingers and in the end I fell back onto the ground and rolled backwards … Brenda got a great shot of me rolling! 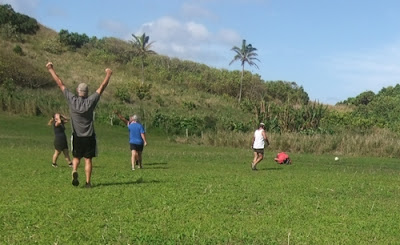 Here is a great action shot of me kicking 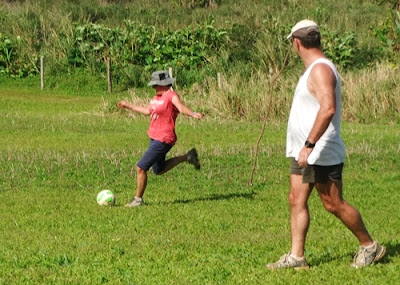 So after the exhaustive game it was home to a quick shower and then down to the square for a produce market and some takeaways – not many there just there and the only food was produced by Carol, Charlene and Wayne but it was delicious (I love the island food) 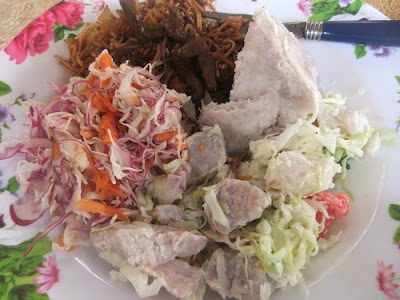 Okay starting from the top with the brown meat and noodles, then clockwise to taro (the greyish looking thing), then at 4 o’clock on the plate is small white cubes – that is raw wahoo fish, then at 6 o’clock is raw tuna and above that is coleslaw.
Yep that is raw fish … technically it is cooked in lemon juice and it is delicious!