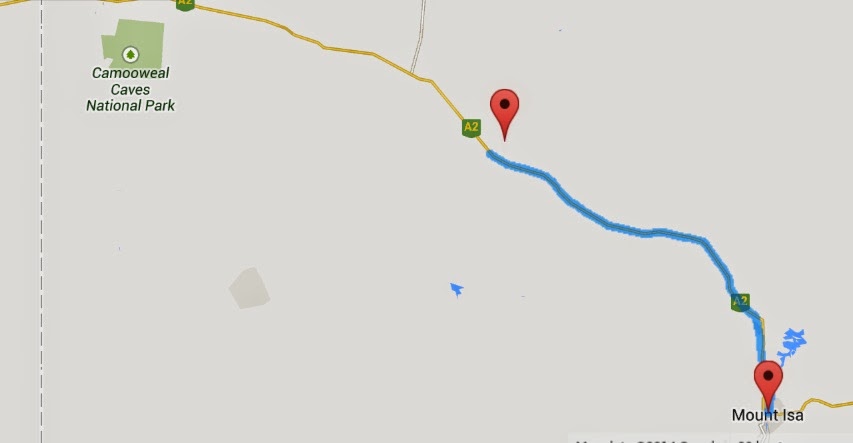 Can you believe this we are in the middle of absolutely no where and we get internet reception (and it is pretty good too!) not sure if it is because we are on the national highway and it is flat an no ranges to block the signal.
Before I begin todays ride below is a photo of another touring cyclist.  We don't know his name and his english was pretty limited so we thought asking his name would be difficult to do so we nicknamed him Chairman Mao 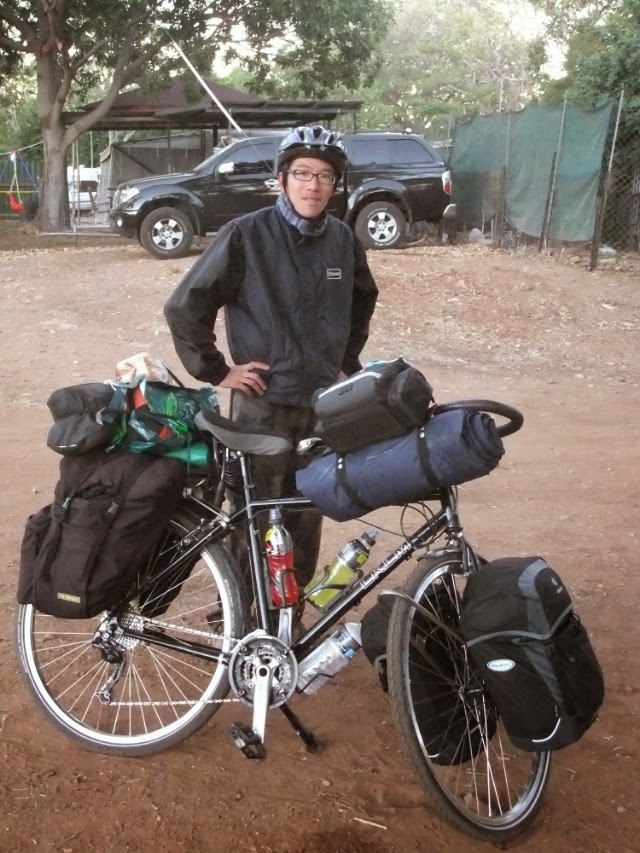 He started in Adelaide, up to Darwin and then back down to 3 ways and across to Mt Isa ... he has been on the road for 70 days and has cycled 5500km and unfortunately for him he has had strong headwinds since Darwin.
So onto todays ride ... we left a little late this morning what with the looooooooong walk to the kitchen and then the looooooooooong walk to the toilets etc ... time soon ticks by.  It was warmer this morning but I still wore my socks with my sandals (just call me Phil!) until we began cycling.  there was no wind this morning  and if there was a breeze it was ever so slight coming from the west as when you looked at the mine chimney thats spews out smoke it was wafting back over the town and when we were on the outskirts of Mt Isa (about 12km north) we looked back and you could see the smoke and dust was just hanging over the town ... 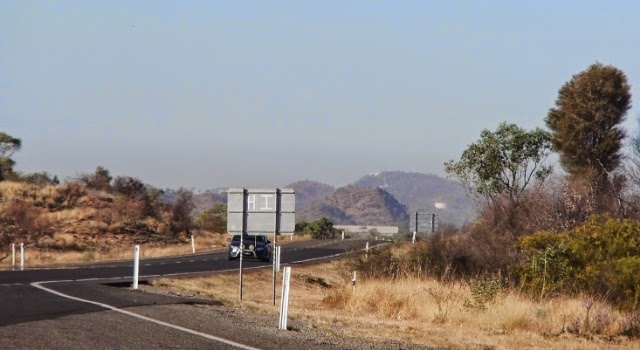 This is a town we could never live in ... it is not a pretty town (especially when it is drought conditions) and the air is just full of dust particles and red dust is just everywhere - it gets up your nose, it is on your tongue if your mouth is open too much, you can feel it on your skin and in your hair!
So riding north for a while we came across these 2 along the road side ... 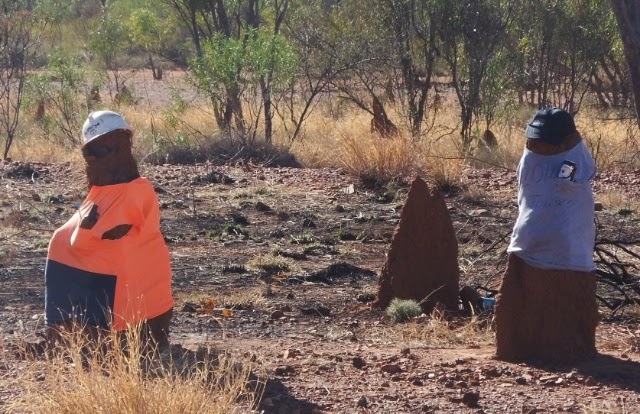 LOL and this happened alot during the day ... some with some really good clothes - they are termite people - someone has dressed up these termite mounds with clothes and one has even gone so far as to put sunnies on the one in the orange shirt ... it was quite entertaining  through out the day ... speaking of termite people ... you could almost say Neil looks like one in his Homer Simpson cycle shirt ... 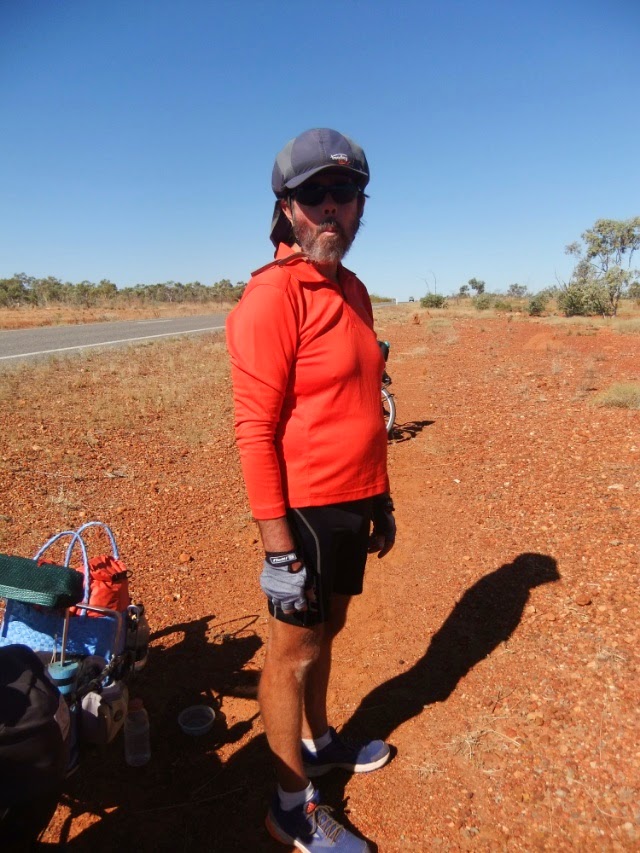 I have to admit that his pot is getting very small and he has lost alot of weight.
The wind did kick in around 10.30 and you know how I mentioned in a few posts back that the locals and caravaners all say we will get tailwinds .. well I am STILL waiting for them!  The wind was coming from the west again so we had no wind, a headwind while the road veered west to much and then a cross wind when it veered to the north.  Basically we had a cross wind for the bulk of the afternoon.
We did stop at the World War II rest area and gave Kouta a bath.  Since the campground was a dust bowl there was no where to wash kouta without him rolling around in the red dust and then it would have been pointless washing him.  this rest area had non potable water so we decided to wash him on the concrete near the tables and then chuck him in the trailer and start pedalling ... it was a good idea and Neil and I were happy that he is no longer a dusty red colour ... Kouta, however, was not happy and never is after a bath.  but he is lovely to pat now and your hands come away clean after patting him!
So despite the late start and wind we still managed to keep up a good pace at 15km per hour.  the bikes are fully loaded with food and all the water bottles are full (except the bladders) at 19 litres.  There is no more room to squeeze any more food into the panniers and I must admit this is probably the heaviest my bike has been so to come the 90km today is a good effort!  I calculated that my bike is probably carrying an EXTRA 20kg than normal ... and by the time we get to Tennant Creek my panniers will be near empty!  We had decided that we would try for the David Hill rest area which is about half way but found a nice spot just before it .. 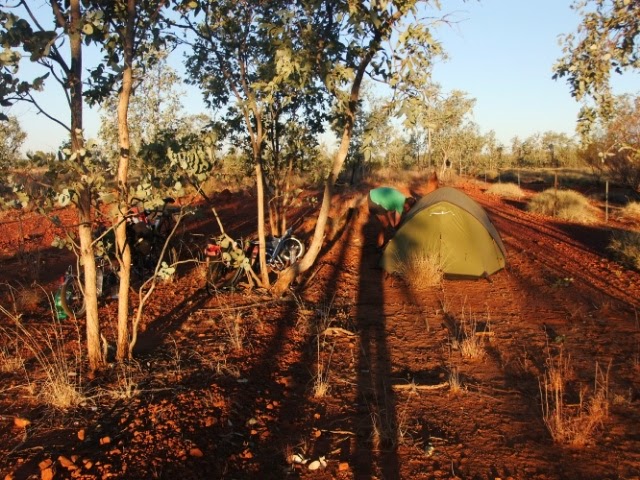 We are about 50m from the road and between us and the highway is the old highway which we saw quite a bit off today .... sometimes it is easy to get to but other times there is a steep embankment .. but for this spot there was a dirt drive as just behind where I took this photo is a gate to someones property.  We did find a clearing along the fence line like we normally do and the pegs went in easy.
So tomorrow fingers crossed we get our tailwind ... it is forecasted to be a south, south easterly which will be a cross tailwind for us.  We have another long day - around 95km again.
Posted by Janet O'Brien at 7:47 PM