Day 1
It as a comfortable nights sleep last night - not too cold or hot.  Being in the middle of nowhere almost everyone around us got up very early to move on.  I heard one alarm at 4.30am!  Ours was set for 6am, we had brekky which has been modified as we don't have bread (which we were relying on!) so it is now 4 weetbix each and I had 2 crackers with jam on to act as my toast!
We left at 7.30am and the wind had just started blowing ... it was a true tailwind and we motored along at 23-24km per hour.  The road is going in a north west direction so the south easterly wind helped us.  This road is straight for 50km and then has a its' first turn for the day!
Since we are cruising along nicely we get to Frewena rest area which is 55km from Barkly Homestead at 10.30am ... in time for a cuppa.  We are carrying almost a full load of water all except the 2 x 2L bladders which we hoped to fill up at the rest area but there was no water.  No big drama for us as we have plenty in supply.
We continued on and finally the traffic picked up - there is considerably less truck traffic as we assume they take the  alternate route to Darwin - via Cape Crawford on the Tablelands highway.  However there are heaps of vans coming from Tennant Creek today and they must really be feeling the wind!

Along the road today we saw one termite person and this one is probably my favourite so far (there seem to be getting less and less termite people as we come along this Barkly highway!) 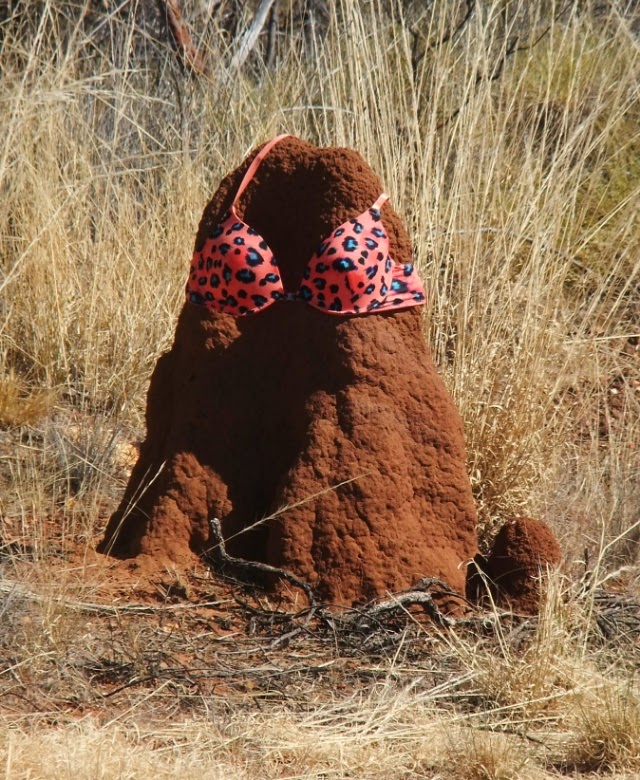 I am hoping that either mine or Neils cycle shorts die soon and we can try and dress one of these termite mounds with a pair of cycle shorts ... we have so few clothes with us we can hardly afford to just dress a termite mound with what we have so any dressing of a termite mound will be done with clothes that have completely died on us and can't be repaired!
At lunchtime we pull over and have a ration of crackers and processed cheese (I have to ration out the crackers now!) once back on the road again we noticed the wind has dropped considerably but that is okay as we are only another 15km from our target destination of 90km.
From the rest area to about the 80km mark there are plenty of ways to get off the highway and into the bush - I am not sure what they call them but alongside the road and into the bush are cleared area for the flood water (when it rains) to be diverted.  they are grown over but alot are quite clear and easy to get the bikes in ... unfortunately when we started to look for a camp site these were no longer alongside the road.  There is a microwave tower at 93km and we are camped there for the night.  We were wondering if anyone else will turn up!

It is a hot day so we want some sort of shade and this is all there is ... 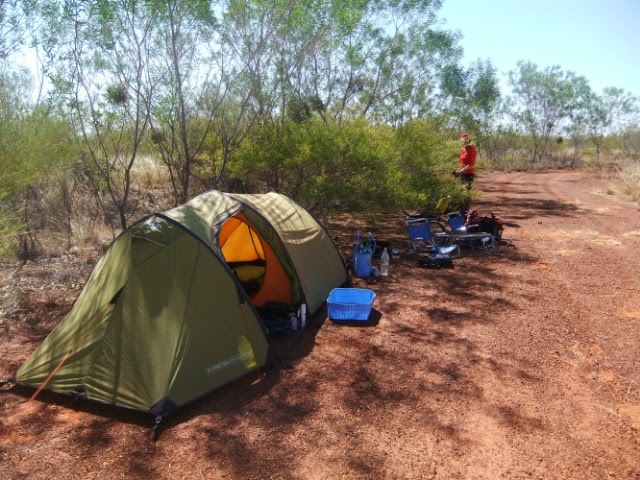 and this is right outside our door !!! 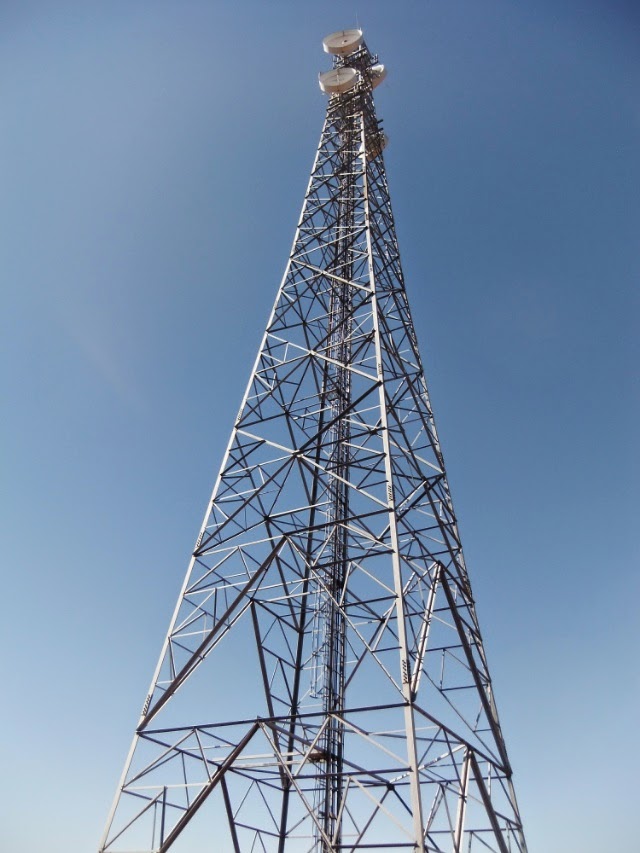 We had a cuppa and I was just about to set up for a wash when I can hear something coming down the driveway and I think crikey someone is coming to camp here.  It is a small Apolla van and 2 guys get out and they have these big binoculars and are looking at the tower.

They are bird watchers and inform us that a rare grey falcon has been spotted in thisarea and on this tower so they are here to see if they can see it.  They see nothing but then Neil pipes up there is a nest on the 3rd platform and they say oh yeah it may come back at around evening time.  There are also smaller nests on the first and 2nd platform so we said we will keep an eye out and leave a note on the fence if we see one as they are returning through here again in a couple of days.
Tomorrow is another 90km day and this will make our day into Tennant Creek on Friday a short one.

Day 2
Well I don't think I will camp at another microwave tower - this one was particularly bad with ants and they drove poor Kouta crazy that he was dancing on his paws all afternoon and evening!  They were little black ones that like to bite as well as stink when you squash them ... so when Kouta went in the tent with them all over his paws he proceeded to kill them and the tent stunk with smelly ants all night!
We didn't see our rare grey falcon but a falcon did come around 6pm and it was a Nankeen falcon which is a pretty common one so we left a note for the 2 birdwatchers should they return there in a few days.
We set off this morning with another tailwind for the bulk of the day.  It was just as strong as yesterday.
We picked up water at the last rest area along this highway (41 mile bore) and it had a water tank that some nuff nuff decided that they would just  leave the tap running, they are usually a spring mounted one that when released just turns off, but sometimes that doesn't happen and so you have to push down again and just turn t slightly and that will work for the majority of the time, so whoever used it before us obviously doesn't have a whiff of common sense and didn't do that, instead it was easier to just leave it running and plead ignorance! We think alot of water had run out as there was a puddle around the tank and this ground is pretty absorbent but it was beyond that and now it had a puddle ... the Finches liked it thou!
So on the road this morning we came across a very patriotic termite person ... 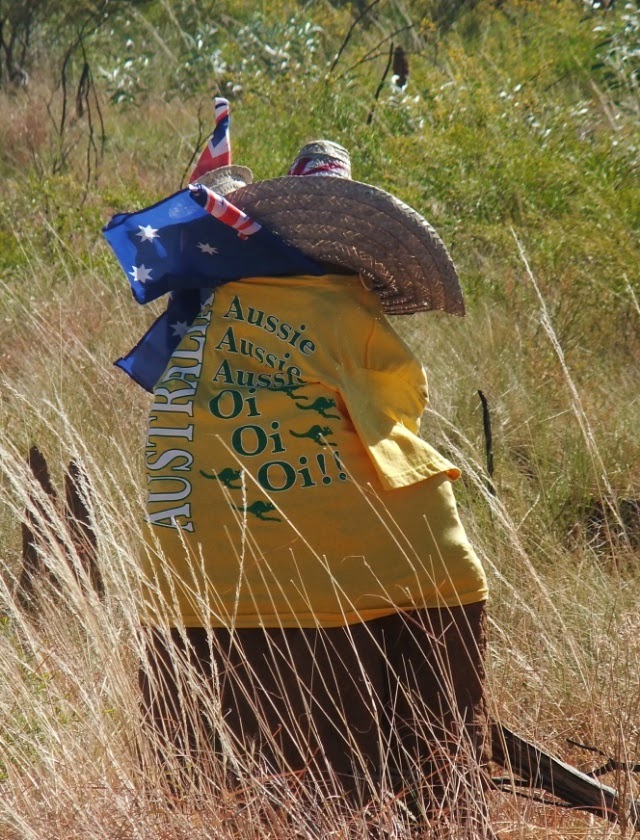 I think this may have been recently done as the t shirt looked relatively new and not faded and the flags are also new ...
Not alot happened today - the usual low lying shrubs alongside the road and the 10km markers to countdown to the Stuart Highway were pretty consistent with our odometer readings.  Around 80km each side of the road had been graded and had regular flood water gradings away from the road so it was pretty easy to find a bushcamp ... we just wanted one with a tree for shade to sit under.
Since there is plenty of sun out here in the outback we are charging up the storage batteries while we cycle, we both have the solar mats attached to the trailer (but they can be attached anywhere like off the pannier bags etc) so mine is over Koutas shade cloth and the usb cord is long enough to have the battery in my rear saddle bag ... 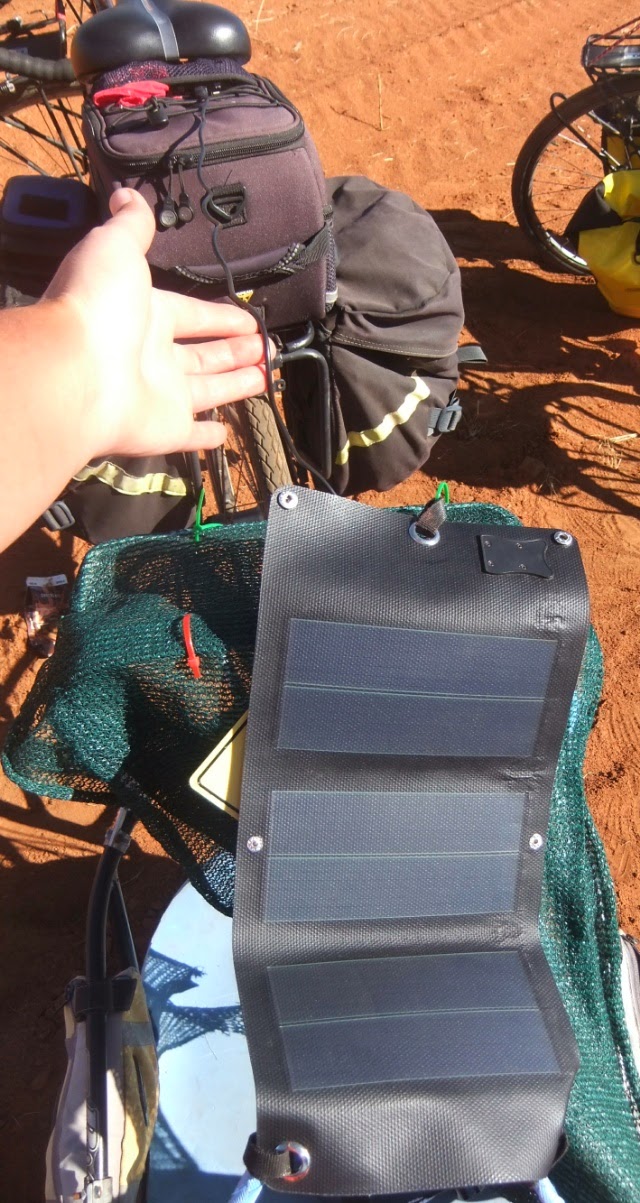 Each night while we sleep we put the tablets on charge on the batteries and the next day we just recharge the batteries ... we have worked out quite a good system!
So I forgot to take a photo of the campsite but here is a photo of us having a cuppa before we put the tent up ... 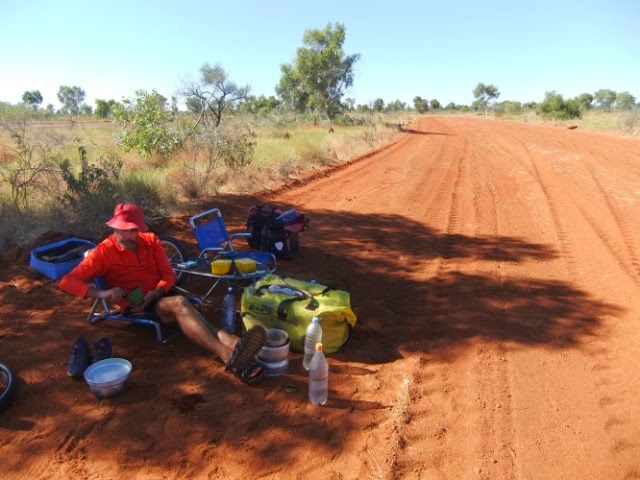 that red, dusty dirt track goes out to the road which is angle back towards Neil, so people can see us especially if they come from Tennant Creek - quite a few trucks have beeped us!
So we are about 13km from the Stuart Highway and then it is a 25km headwind ride to Tennant Creek tomorrow!  We decided to do it this way so we get in early, settle, get some food etc instead of arriving late today and rushing to get settled and food.
Tomorrow I will finish this post with day 3.
Posted by Janet O'Brien at 4:47 PM