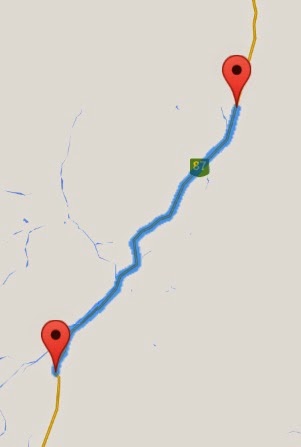 Day 1
We treated ourselves to a little sleep in today and didn't roll out of bed until around 7am instead of the usual 6am!  We were away by 8.30am with only 14km to go to Taylors Creek rest area.  There was no wind really this morning which is a good bonus for us.  Upon getting to Taylors Creek which camp 5 gives it a tick which means that it is good ... well as soon as I saw it I said no we will continue on and bush camp again tonight!  We did however stock up on water and took extra water so we could have a good wash and wash our hair (it is our 3rd night without a shower!).
We were both disappointed with the rest area - it had 2 tables with shade, a eco toilet and a water tank but it was a dust bowl and had no shade and no where to pitch the tent without a caravan running you over at some point during the day.  So we ended up washing Kouta as he was looking and feeling a little dirty ... off course he hated that but it is easier to do it at a rest area, chuck him in the trailer and start pedalling so that he dries in the wind (a bit like a hair dryer!).
It is only 42km to Barrow Creek from here and there is internet reception.  Along the way we met a French Cyclist - Lauren who was heading north and is another European that is doing a round the world trip ... he flies out of Darwin to do the Asian countries next.  So far he has done 22,000km. 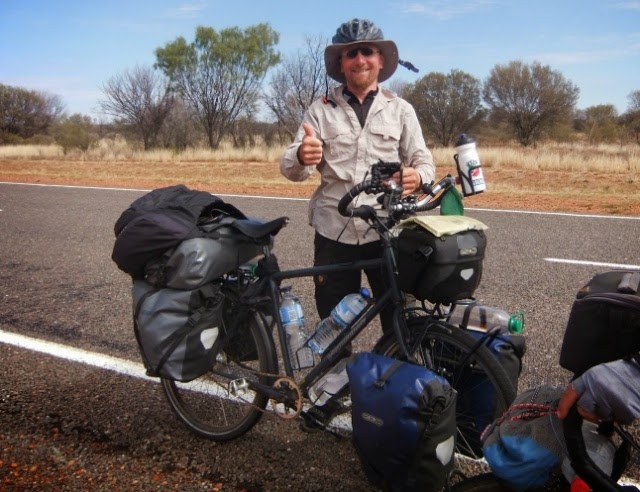 When we met the cyclist we were going through some lovely looking scenery ... do you recognise this Dad 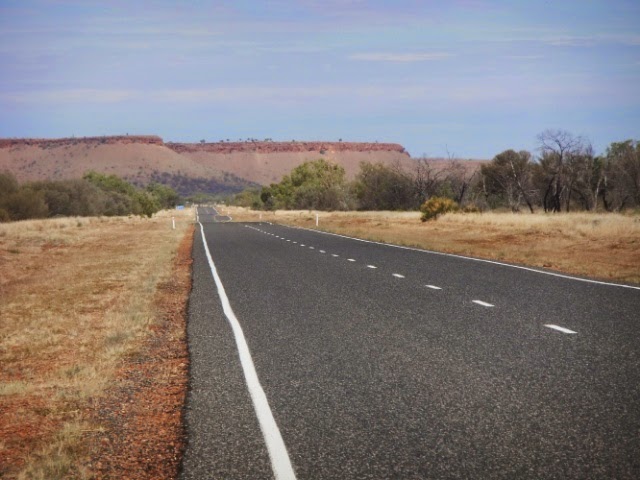 This is the enscarpment north east of Barrow Creek you know the one we think the Falconio murderer hid in!
We seem to be coming across alot of these sort of enscarpments and ranges now on a daily basis and I suppose the drown out the monotony of just seeing scrub trees.  In various lighting situations (dawn, dusk, cloudy and sunny days) they are very spectacular to see ... I love the Outback!
Once at Barrow Creek we quickly jumped on the internet to check emails, weather and wind and also had a cuppa and lunch.  Now Barrow Creek has a historic Telegraph station and a gas station/roadhouse ... we had both stayed here on previous occassions and back then (20 odd years ago) it was a pretty run down place and it still hasn't changed ... to look at it it is really a dump and it does have camping but we are not sure if people camp there anymore as it is just a dust bowl maybe the camping is around the back ... but I would prefer to bush camp.
From here it is about 90km to Ti Tree and we decided to do another 20km.  At this point the wind had picked up again this time it is blowing from the west north west and since the road is going in a south west direction we had a head wind.  Although not strong but enough for you to feel it.

The winds around here and towards Alice Springs are completely different to the ones blowing around Tennant Creek and you really notice it just south of the Devils Marbles.  The system for this area is changeable to from day to day ... I looked on Elders before we left Barrow Creek and sometimes the wind is from the north east, changing to a north west in the afternoon and then the next day it is from the south east changing to the east in the afternoon ... it is not as constant as Tennant Creek - east south easterly and always blowing a gale! and it is not as strong  as Tennant Creek - usually under 10km per hour.  So I am happy with that and this is also for Alice Springs - that wind system is different to the one here in what they call the Grape Vine Territory (which includes Barrow Creek and Ti Tree) so once at Ti Tree we can see what type of winds we will have going into Alice Springs ... interestingly enough the French cyclist said he has had 4 days of northerlies (albeit light) and at the same time as we were coming south we had moderate east south easterlies ... we did try to tell him that his wind will change around Tennant Creek to more of a tailwind but I don't think he believed us!
It was getting later in the afternoon before we started looking for a bushcamp spot and as we come over a slight rise we had a nice view of what was in front of us 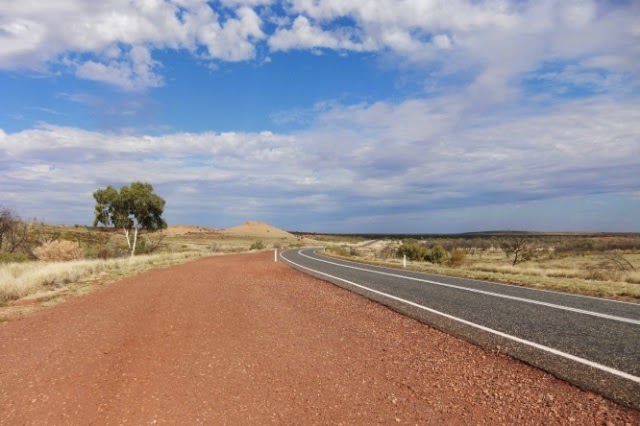 we found a spot not long after this photo was taken and that would leave us about 68km tomorrow.  It is like all other camp spots on a graded section next to a property fence line but this graded section was done for the laying of the Telstra cables for the NBN - this was done a while ago as there are now bushes and grass growing on it but there is enough cleared spots for the tent to fit.

Looking forward to a shower tomorrow and washing the clothes!

Day 2
Up early this morning so we can arrive at Ti Tree at around midday, get some of the washing done and then sit back and relax.
No wind this morning and if it is blowing it would be a light one coming from the east somewhere.
Last night was a little chillier than normal and this morning we had a bit of condensation on the inside of the fly ... we haven't had this for ages and I think the further south we go the more there will be condensation on the fly.
Even cycling on the road this morning was cooler.  We took a cuppa break at the Teamsters Memorial. 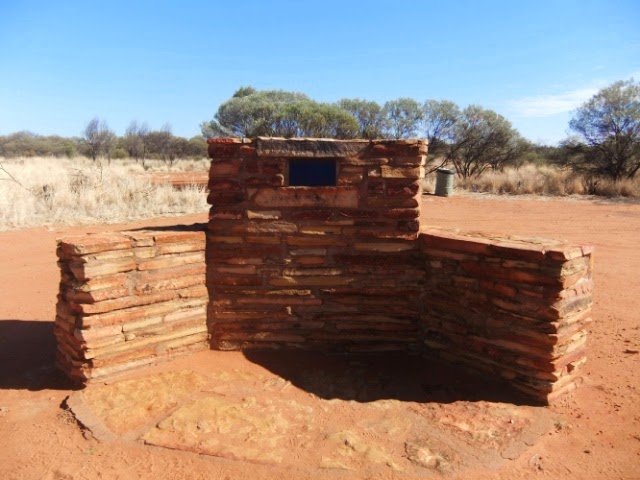 the plaque reads the following ... 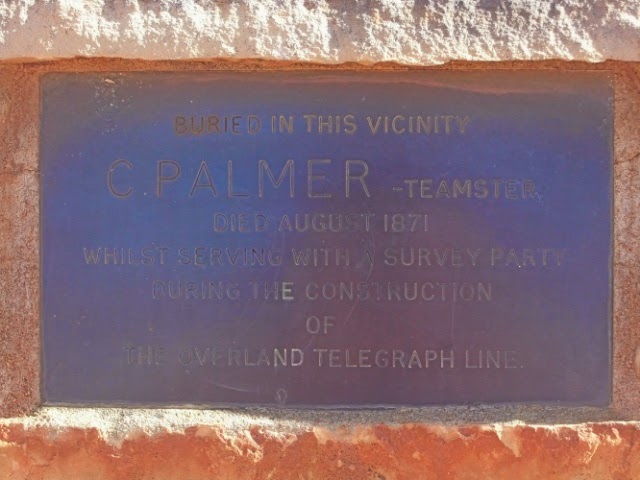 and they even have kept one of the telegraph poles ... you can see it behind the bikes 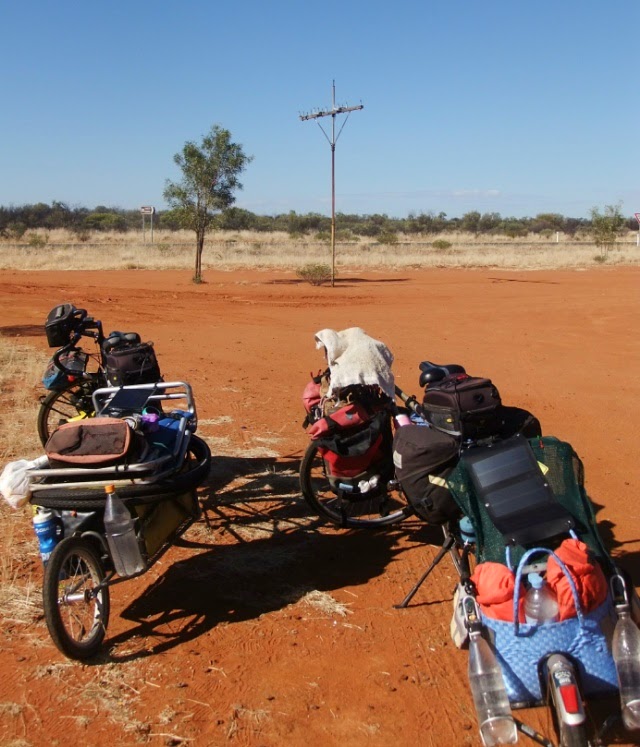 I think the metal pole that is holding the telegraph part is not the original I would imagine the original would be a wooden pole.
About 30km out of Ti Tree you enter the no speed zone ... so there is no speed limit although they do ask you to drive to the conditions.  The speed limit is generally 130km per hour but very few do that as it is too expensive on fuel to do that speed so I can't see many taking advantage of the no speed zone!
We get to Ti Tree at 12.30 and no one is here but a few have turned up now.  There is another couple in the camping area with us.  They are from South Australia and are a very unusual couple, nice but I have to say that the guy takes a bit of getting use to ... I think Neil dreaded the first hour or so talking to them while eating lunch as he thought I might have a go at the guy ... I think memories of Lake Bolac with the ute and me throwing away the keys  came flooding back to him!  Like I said they are a lovely couple except his manner or what he says can be a bit full on ... lets just say that he is NOT politically correct ... he refers to the Aboriginals as the local wildlife (I am really biting my tongue with that) and in all my travels I have never had anyone say this too me "you're like one of the black fellas" when refering to my suntan! (I nearly bit my tongue off with that comment!) I mean really just how unpolitically correct can you get!  His wife is really nice and is nice to talk too.
So tomorrow we will have a rest day here.
Posted by Janet O'Brien at 5:07 PM