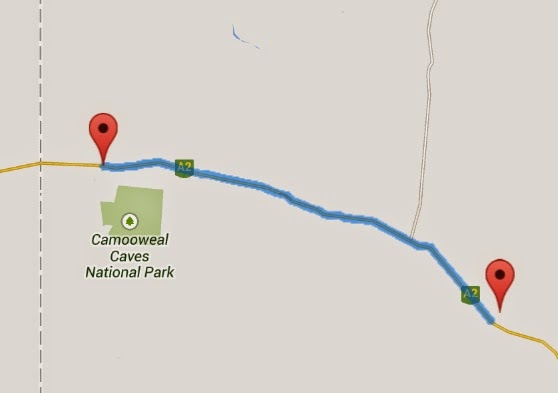 We had brekky under the stars this morning ... it wasn't freezing cold but with warm gear on it was quite nice eating brekky looking at the stars, waiting for the sun to rise and eating food by torch ... so romantic!!!
We were away by 7.30am and while it wasn't too cold I still wanted to keep my feet warm so I have resorted to doing something I never thought I would do ... ever in my life ... after ragging Dad for years about wearing socks with Sandals ... I too have succumbed to the "wearing socks with my sandals gene" and have proudly worn these about the campsite and on the road for at least an hour this morning!!! 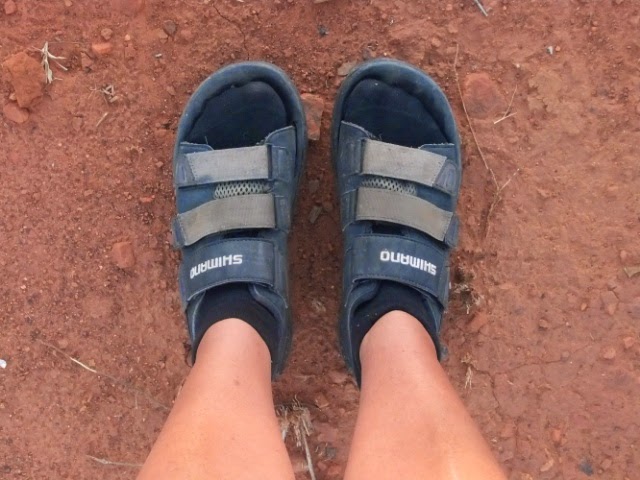 LOL it could be worse ... I could have bought and worn white socks!!!
The wind was also up with us and was definitely blowing from the south south east and so once on the road it was predominantly coming behind us across our left shoulders so we could make good time and as we got closer to Camooweal the road vears more towards the west and the wind came across the shoulders.
Not much truck traffic today - the mine trucks with their 3 mineral carrying trailers have stopped and only cattle truck seem to be on the road.  Although there is alot of caravan traffic ... most are going up towards Lawn Hill and all the national parks north of us.
We did notice alot more wedge tail eagles alongside the road and these ones seem massive compared to the ones inland from the coast ... a group was feeding on a dead kangaroo and most flew off as we rode by ... one stayed in the tree to keep an eye on its' meat and I managed to get some good photos of it ... 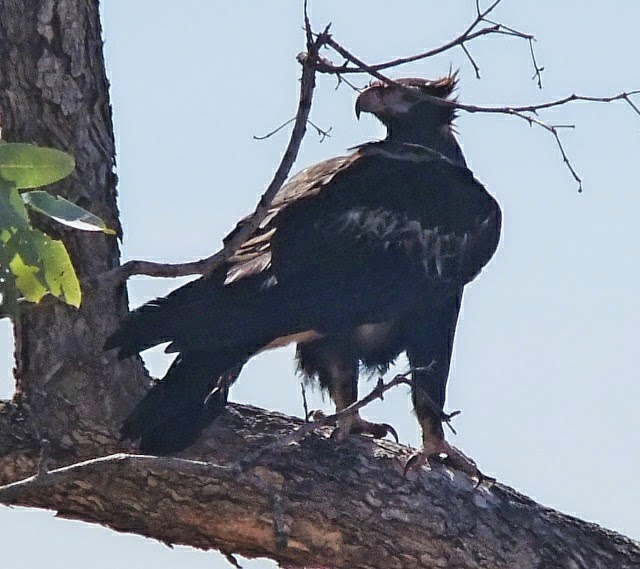 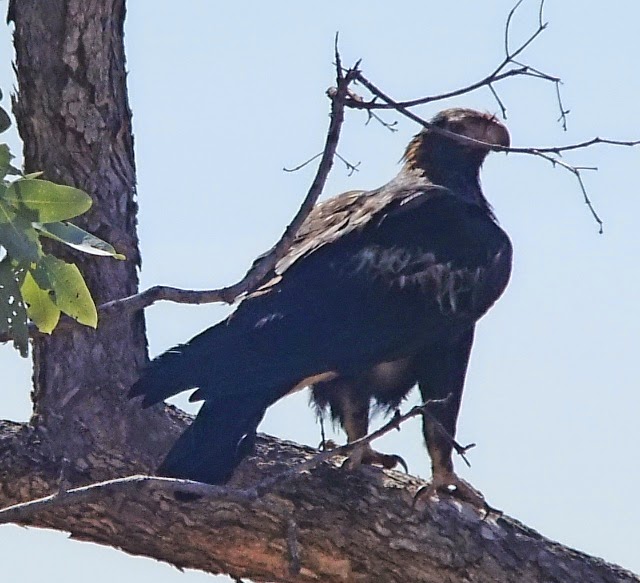 they look funny sitting in the trees as the trees are not big they are small or medium and when you get a massive wedgie in it it looks like the bird will cause the tree to topple over as it seems to heavy for the fragile looking tree!
To prove we had a south easterly I took a photo of this large and impressive windmill alongside the road ... 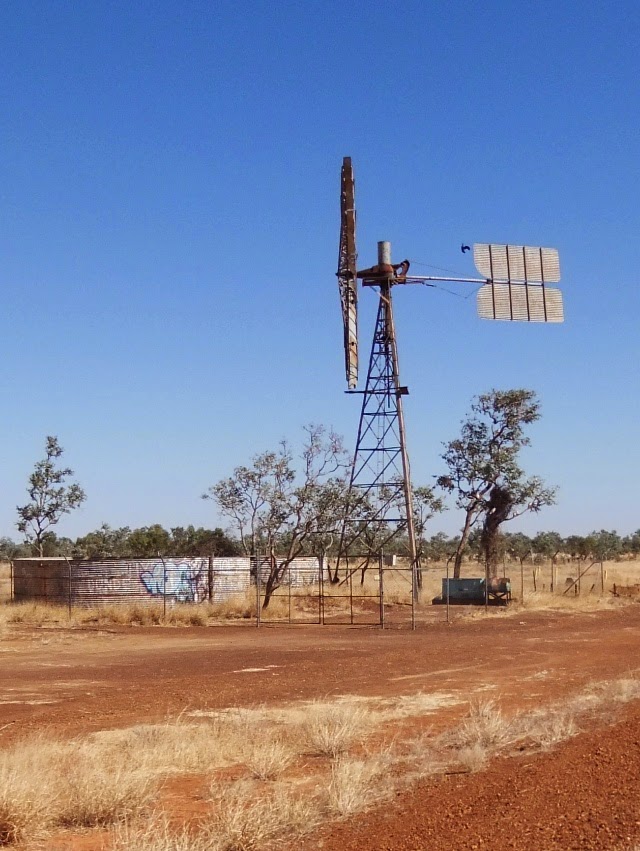 the road is heading west and this is on our right.
Yesterday I put up a photo of some termite people ... well there were more of them today ... this one was wearing a hat ... 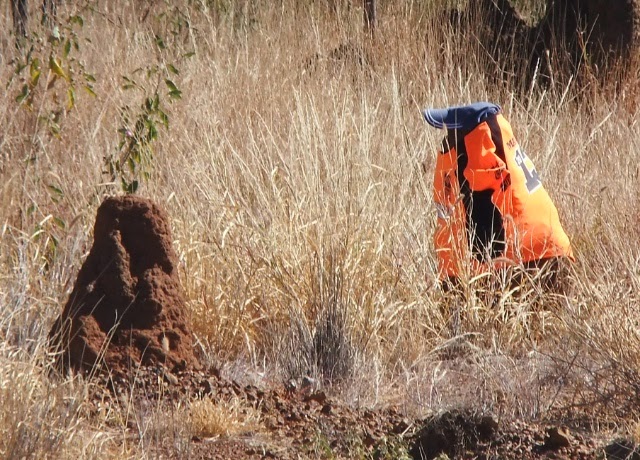 Just before we got to Camooweal about 10km out we were riding along and I am in front as usual and we were on some very lumpy and bumpy road so I was watching just in front of my front wheel we I saw this grey snake about 50cm long and next thing I know it is behind my front wheel and I squeal and try to lift my feet (which failed as I ride with cleats so my feet are stuck to the pedals!) and then it quickly scampered off ... I was mortified that I ran it over - I didn't feel the bump and I am hoping due to the lumpy and bumpy road that it could fit between the gravel and my wheel.  I felt so bad that I may have injured it and off course you can't go back and deal with it ... as it most probably is poisonous!  So for me I felt awful coming into Camooweal and I feel so guilty!
So this town has a population of 310 people and there is not much here - a small general store, motel, petrol station, bush nurse, a few tourist things and not much else.  We are at the Post Office motel van park, it has a kitchen with fridge, toaster, jug and bbq so it has everything we need.  And believe it or not it has grass! 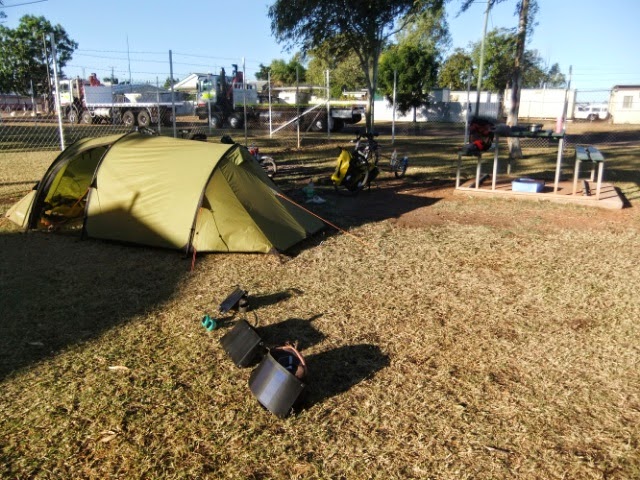 the last time we camped on grass was way back in Cairns I think!  Kouta doesn't like the grass as it is full of prickles.
We are staying here tomorrow before tacking the 480km to Tennant Creek.
Posted by Janet O'Brien at 6:31 PM