What a long days ride it was today and we also did an extra 12km ... more on that later in this posting!
Well we enjoyed our afternoon in Toora yesterday even though it blew a gale but fortunately for us we were nestled in amongst cabins so we were in a very sheltered spot. The wind blew all night and very strong indeed - despite being sheltered the wind still managed to shake and rattle the tent around. And you know how yesterday I said we were below some windmills and the owner of the caravan park said that you can only hear it when a northerly blows ... well he needs to stay in a tent at his own caravan park! Since the wind was so strong last night I imagine the windmills were a spinning well we could here a noise and it was a whooshing then it would phase out and then phase back in ... not annoying at all but quite rhythmic really that if you concentrated on the whooshing you soon would drift of to sleep ... only to be awoken when the tent rattled and hummed!
Anyway we had a good sleep and Kouta either slept at our feet or got cold and slept between us. We left this morning with a strong tailwind so we made good time along the way. The main highway was good and the most courteous traffic you could ever ask for - quite a few cars would sit behind us untill around the corner - in most cases so far they just overtake us on a blind corner and don’t worry that something maybe coming the other way!
We weren’t sure just how much showery weather we were going to get today and because the day is spent riding on flat roads we could see when a shower was approaching - we do know that to our left is the Strzelecki Ranges park and that had the bulk of the wet weather. 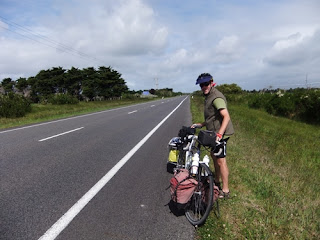 We lasted okay until Tarraville and then our first shower came so we sought refuge in this old church that is apparently the oldest church in Gippsland. 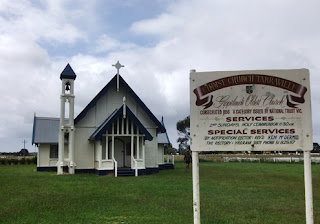 From here we sort of made a mistake, Neil blames himself for not looking at the map in conjunction with the road signs ... so we merrily cycle away with the wind a blowing behind and we come across this sign which obviously was put there by a very happy Geelong supporter and it covered up the council town name sign. 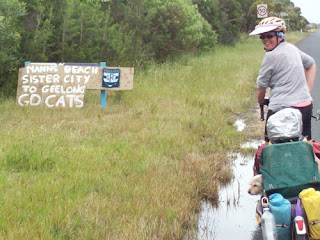 We took this for you Jude and thought you would love it!
No on to our mistake - the town name is Manns Beach we get to the end and realise it is a dead end - we had taken the wrong road back a Tarraville!!! Oooops! So back we go and to make matters worse into a head wind - it was another 6km back to Tarraville so we did an extra 12km. Off course poor Neil was cursing himself for not refering to the map. So back to Tarraville we go and by now the showers were becoming more frequent and we kept pulling over to take Kouta out of the basket and putting it away to keep it dry, then we would think okay no more rain so put it back only to take it away from him 30mins later when the next shower came! Poor thing. We did this so many times at one point the wind and rain was so heavy that we hid under some pine trees and to an onlooker I am sure we looked like cattle amongst the trees!
At about 65km I begin to get weary. Lucky the road is flat and we still have a tailwind (sometimes a cross wind) that is easing a bit. We finally made it to Woodside Beach and the campground is practically empty of tourists but full of summer holiday caravans, annexes and lean toos! This place would be packed and noisy in the school holidays but for now there maybe one other tourist here as well.
So tonights dinner is Tuna Mornay 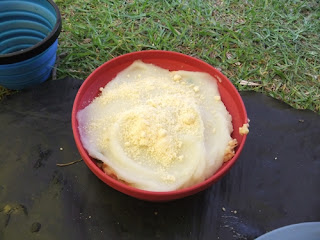 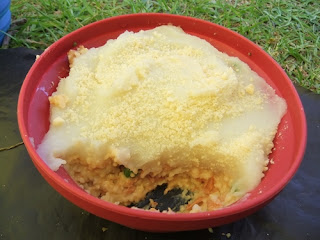 It is simple to make, boil up dehydrated peas and shitake mushrooms, soak the cous cous, make and heat up so cheese sauce, make up so mash potato via a dehydrated pack of mash. Mix the tuna in the cous cous, peas, shitake mushrooms and cheese sauce and cover with mash - yummy! See I can make more than just weetbix for dinner!
So after dinner we went for a walk along the beach where it is blowing like a hurricane.
This is looking westward 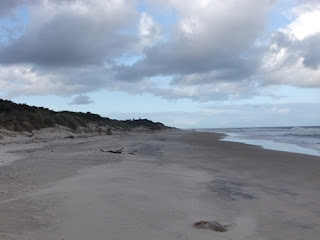 And this is looking eastward 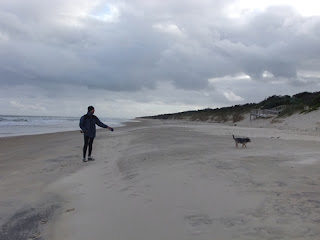 And this is us! 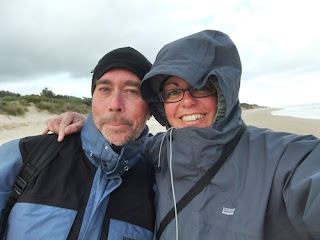 I said to Neil that if we were in shorts and t-shirts and had tall skyscrapers to our right it would be like we are in Surfers Paradise - instead we are in thermals and gortex and have sand dunes to our rights and it is freezing which must mean we are in Victoria!
Now this Woodside Beach and McLoughlins Beach, Reeves Beach etc (east and west of here) are all part of something called the Ninety Mile beach and apparently it is a lot longer than the 90 miles but for some reason it is called that!
So tomorrow is another longish day about 68km or longer if we get lost. Since we are riding on back roads it is very easy to take the wrong road but despite taking the wrong road it is lovely flat cycling around here and the back roads are superb for riding - no traffic!
Posted by Janet O'Brien at 7:35 PM