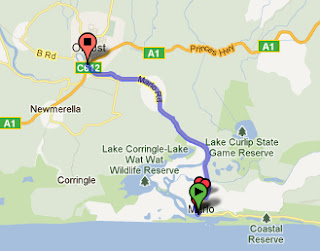 Only a little day today - bad hayfever and it wasn't pleasant cycling.  Stopped at Orbost nice and early and basically had another rest day.  The campground has heaps of trees so there was plenty of shade throughout the day. 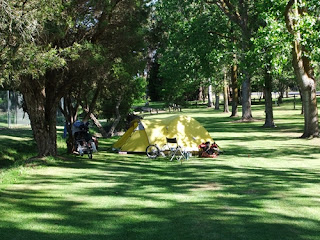 Left early this morning with an absolute full load of water and a little extra as we knew the temperature was going to be over 30 degrees which is pretty hot for cycling.  So the bikes were very heavy and with a little extra food as we knew this would be our last reasonable supermarket for a week or more ... and I think in the end this was to be our undoing!
So we sort of knew there would be quite a few hills between Orbost and Cann river but we were hoping to get some flat to recover from the hills.  But basically you are either going up or going down!  The first big hill is about 4.5km up with a reasonable gradient and the same back down.  Unfortunately we have no other choice but to go on the Princes Highway and the traffic was quite reasonable not alot but enough to have a few 'dim wits' driving on the road taking risks when overtaking us.  Going up some hill somewhere between our first break (Murrungowa rest area) and our second break I have managed to hurt my back - I am still trying to figure out how and I think it was just a combination of many things - very heavy bike at the front, Koutas constant movement and trying to keep the bike under control when we didn't have a shoulder and cars over take, low rider panniers etc.  I think this has led me to pull a muscle in the lower back and for the rest of the day my back ached. 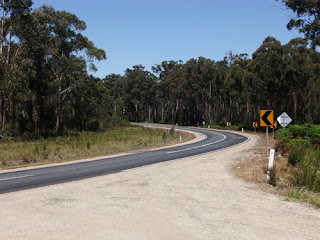 this is the flattest bit of road I could find!  So by mid morning I reckon it was already 30 degrees and the sweat was pouring of us.  Sure glad we took the extra water as we were guzzling it down!  Relieved to get to the Bemm River Scenic Reserve as just before we got there (before the small climb to the entrance) we were run of the road by a van that decided to over take a car towing a caravan and unfortunately it was at that point on the highway where we had no shoulder to retreat to, so we had to quickly get of the road - it happended so quick! I wonder what is going through that persons mind when they do that!?  The rest area   is about 300m of the main road but you can still hear traffic.  We managed to get a spot in amongst the shade but it was still hot.  Even little Kouta was panting away furiously trying to find a cool spot and when he did the blow flies drove him nuts! 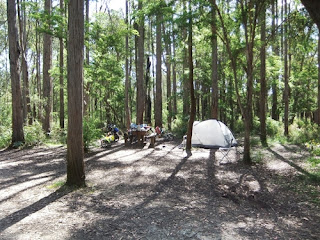 I only just managed to get of the bike, the back is very sore and I couldn't stand straight.  So I laid down for the rest of the afternoon hoping it would ease up over night.  We were the only ones camping here!  There is no water to drink just tank water to wash your hands and pit toilets which weren't as bad as some that we have come across!

Bemm river scenic reserve to Cann River = 30km
Cummulative total = 734km
Unfortunately I woke this morning and the back is very tender and I still can't stand straight.  Thinking that a small walk might loosen me up a bit we went on the rain forest walk which is a short 1km easy walk to see where the McKenzie river meets the Bemm River 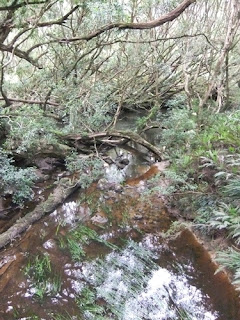 It is hard to tell by this photo as it seems to be a mass of criss crossing trees and fallen branches all around it but this is where the 2 rivers meet. 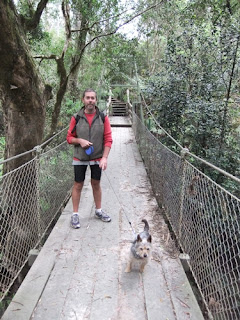 Kouta was a bit uneasy walking across this swing bridge - maybe he got motion sickness! 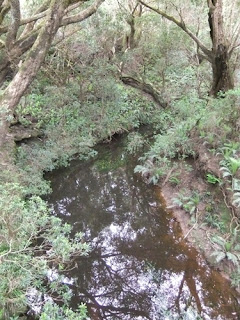 this is the McKenzie river
After getting back we decided the walk made no difference - we had to make the decision to either go to Cann river (shorter) or back to Orbost - I didn't think I could make it back to Orbost with my back so we took the shorter option (by no means the flattest!).  We also decided for me to take the luggage trailer and Neil to take Kouta.  So I off loaded some of the food onto Neil and set off.  Still climbing for the bulk of the first 15km to Lind National Park. 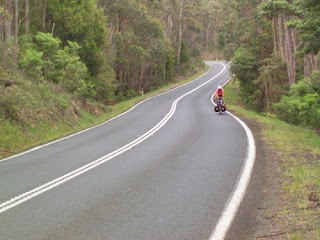 Here I am slowly coming up the hills which are a good gradient just long and a few of them!  Today the weather was alot cooler and almost muggy.  But the traffic was very heavy.  We noticed that the road was narrow in places and for most of the time we didn't have a shoulder as you can see in the photo above.  It was infuriating to cycle today as the traffic although alot of it were just ... not 'dim wits' today but more 'dip shits' (excuse the expression!) really they just don't know what to do when they see us - the amount of times they over took without a regard as to what is coming ahead I actually lost count.  Due to no shoulder for the bulk of the day I struggled.  At one point there was 2 men (don't know what they were doing) but they had a Vic roads car - so I asked Neil later (as I was far behind!) if he said anything to the vic roads guys - he said yes and that they should be looking at bike paths along here ... I laughed because you all know that I also said something to them and mine wasn't as polite as what Neils was! mine was somewhere along the lines that they should be building shoulders along here and then added quite a few swear words along with it!!! LOL I tell you I felt alot better after saying it to them! Anyway just after yelling at them we go for a lovely long downhill!
The road tends to flatten out a bit about 10km short of Cann River. 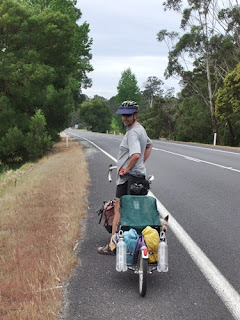 Here is Neil towing Kouta!
We get to Cann River and the campground is a town one and you pay at the hotel, so Neil pays for 2 nights and sees that there is a bush nursing facility so he pops in and they say for me to see them in the afternoon.  I go and there is not alot they can do except give me a few pain killers but they can book me in to a Chiropractor of Osteopath in Orbost but not until Monday.  So initially I decide okay we will stay here over the weekend to see if the back eases up and maybe go back to Orbost (by bus) to an Osteopath.  so that was all settled.
It began to rain abit late afternoon and evening so we had to cook in the tent annexe - I had chicken and corn soup and Neil and baked beans. 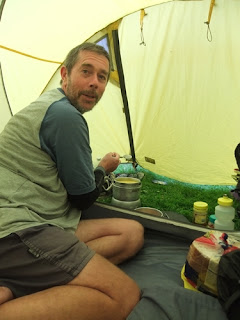 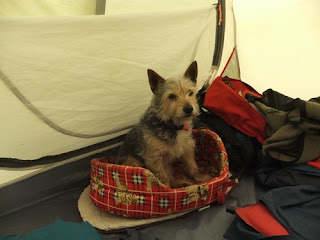 and here is Kouta giving me that look of "I know I have already eaten but do you think you could give me some of your meal?"  and I did soaked the soup in bread and he loved it ... oh speaking of bread - Cann river has a small grocer with big prices - we paid $5.91 for a Molenberg multigrain loaf.
I woke this morning and the back is a little better but I think it might take more than a weekend or 3 days to become better so I said to Neil lets get you on the morning bus to melbourne pick up the car and come back and get us tomorrow and we will take a break in Melbourne, get some treatment if I need it, and hopefully restart maybe after the Melbourne long weekend and have a look at maybe somewhere in the north west of victoria.
LOL here I am all along with Kouta at Cann river and Neil is on a 7-8 hour journey back to Melbourne and this morning I have already planned at North West Victoria trip and my back isn't even healed ... but one is optimistic!  So this is the end of this attempt at Canberra - hopefully we will be back again to do this Monaro highway.
Posted by Janet O'Brien at 1:45 PM