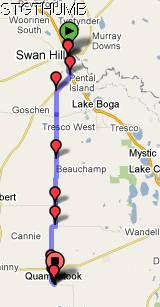 Swan Hill to Quambatook = 58km
Cummulative total = 1497km
As promised we went back into Swan Hill yesterday on our rest day and I managed to get a photo of the giant murray cod ... 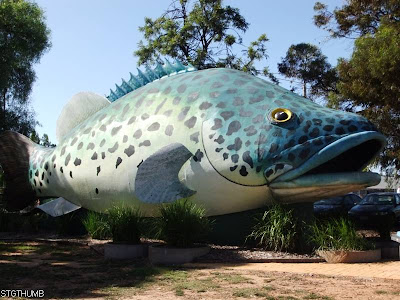 we also had a look at the top tourist caravan park that is alongside the murray river and it was just as empty as the caravan park we were in. It has a lovely location and you can see where they had built a levy for the flood waters all along the caravan park and also the adjacent public park land.
I liked Swan Hill and the Riverland park alongside the murray is really nice - they have done a much better job of public access compared to Mildura.
Today we came here to Quambatook and decided against going down to Kerang via the Murray Valley highway - as it was just too busy and the road doesn't have a consisitent shoulder so sometimes you are on the road and sometimes you are on the shoulder and they cars are pretty constant along there. So we decided to risk it and cut across to the Swan Hill/Quambatook road - it wasn't closed like alot of other roads are around this area as we checked on the Vic roads website - there are heaps of roads still closed - like the main one between Kerang and Quambatook - we passed that as we came into town and the makeshift levy is still on the road so it blocks a lane on the road. Not sure how long they will keep it there!
We were so relieved to get on this nice quiet road - hardly any traffic and if there was it was all local. At our first rest break we chatted to one of the wheat farmers (as we used his gate to lean our bikes against!) and he and his brother basically owned all the fields we had just passed (10km back to the turnoff) so he has a rather large farm! He started chatting about the floods and he managed to get most of his wheat cut so he was lucky - there was only one part where it was too wet to cut and they had to leave it. He said the farmers further down were a little less lucky. He was nice to chat to and I tell you he was 77 years old (and he definitely looked alot younger) and is still farming - he has been doing it for 62 years! he said he loved it!
At lunch we were looking for a place to stop and found it hard to find somewhere to lean the bike and we found a road sign pole and I looked up and saw the name of it ... 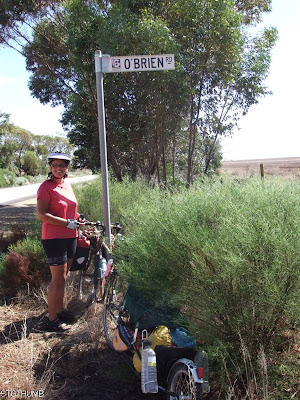 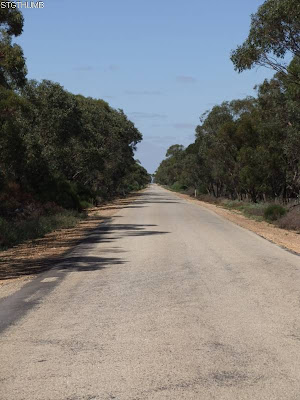 by the time we got to the dog leg it was 35km on continuous straight - I think he might be right!

above is one of the fields that has been left due to the rain as it was too wet to cut. 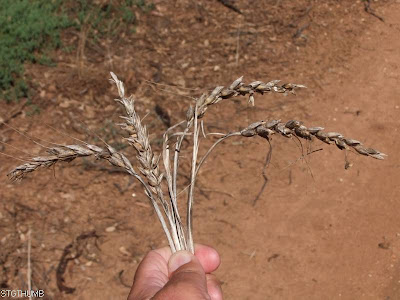 and this is what the heads are like - the grains have mould on them - there was just too much wet and not enough sun to dry them out. I assume they will plow them back into the field soon.
It was okay cycling today despite the head wind as it was on a nice road and I would have struggled with the wind and traffic on the murray valley highway!
We got to Quambatook around 2pm and the campground is next to the Avoca river and off course it got flooded - the town was okay due to the levy bank created but the caravan park had water up to the level of the toilet seat (a bit like our lockhart flood last year!) and the bunk houses in the park had 3-4 inches in them. So they are fixing up the place, mainly replacing tiles etc and getting ready for the long weekend where they have a few bookings - today there is only us! and I am sure the caretaker wasn't expecting any tourists! he does have bookings for the bunkhouse for the weekend so he is getting the toilets ready for them. 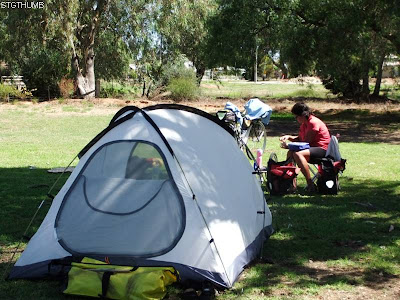 I came back from a shower and Neil had taken a photo of a bird in the tree above us - he is not sure if it is a Major Mitchell or a Corella - but the 2 of them are noisy! 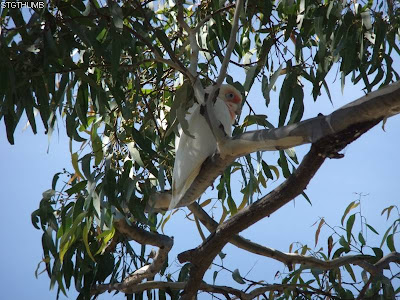 tomorrow we got to Boort.
Posted by Janet O'Brien at 3:20 PM