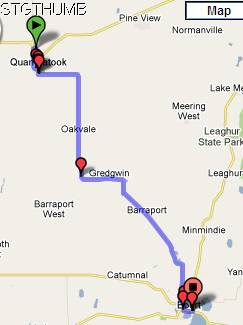 Quambatook to Boort = 43km
Cummulative total = 1540km
Las night we went on a short walk around the township of Quambatook and I have to say after 10 years of drought and one serious summer of rain here this town is a ghost town! Although the water from the Avoca river didn't hit the town to destroy houses nearly every third house is up for sale so you can pick up some extremely cheap houses here! 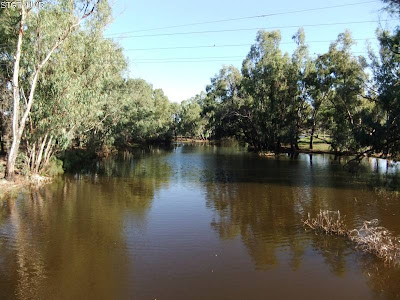 The Avoca river which is a river that goes no where - it starts somewhere north of Beaufort and South of the township of Avoca and stops for no reason at all near Lake Bael Bael which is near Lake Boga - strangely enough the Avoca river doesn't go into the lake but stops just before it! 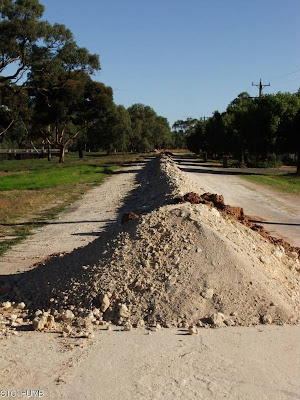 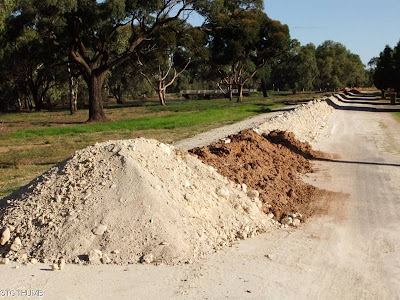 this is the levy in the middle of a lane on the road - to the left of it is the river and to the right is the town/houses. On the other side of the river is the caravan park and footy field which got inundated with water! 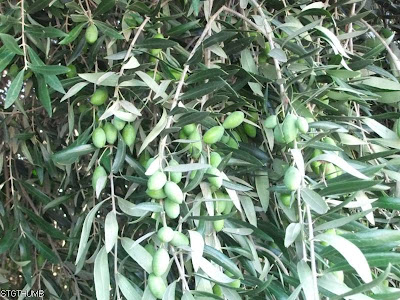 one house (which is up for sale) had a huge olive tree and it was loaded with olives (unripe of course but Neil wouldn't believe me and so bit in to one and quickly spat it back out!).
It was a clear cold night last night and probably the coldest night of our trip so far so it was agony getting out of bed this morning.
We set off around 8.40 and just up the road we saw this field which still had alot of water on it - when you look at it and some of the surrounding fields with water it is hard to tell if it is flooded usable land or an actual lake! Due to the recent floods and rains and water lying around for a while the bird life along the road is absolutely prolific. 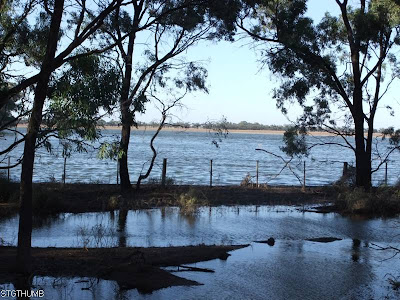 It was a very quiet road today and I suppose being a Saturday morning and the road going between 2 small towns there wouldn't really be alot of traffic. We had a headwind again today and at the start it was very strong but by lunchtime it had eased back a bit.
I think alot more of the wheat fields between Quambatook and Boort were damaged compared to those wheat fields north of Quambatook.
We got to town just after 12 and saw the IGA was going to close at 1pm so we stopped and got dinner. I had a lady come up to chat to me and she said they lost all their crop and house and quite a few lost their entire crop as well - compared to yesterday where only a paddock here and there was lost you could see as you rode along alot more flood damage to fields.
We came to Boort last year with dad on our way up north. The campground is on little Boort lake and last april there was water in the lake but not really deep enough for boats which what everyone comes up here for. So below is a photo of outside our tent door ... 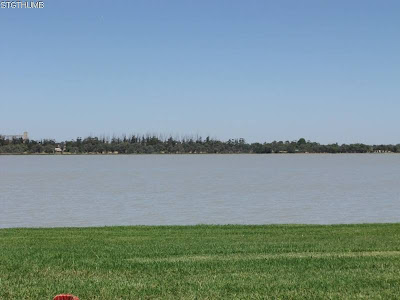 and below is a photo taken last april you probably can't see much difference but the dark strip across the bottom of this photo is sand - in the photo from today the water is right up to the grass - it still can come up further but it would take alot more rain to do that.
So Neil and I can see the difference and at the moment there are a couple of speed boats out there so it is deep enough for them.
Big Boort Lake was empty last time we came here - now it has water in it.
Tomorrow we go to Wedderburn.
Posted by Janet O'Brien at 2:41 PM