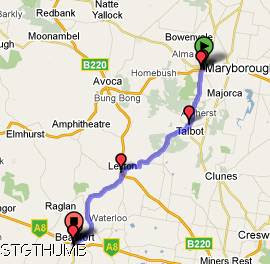 Maryborough to Beaufort = 66km
Cummulative total = 1732km
We had a nice rest day yesterday at Maryborough, didn't do much except chat to NZ and read. We tried looking for the Singer sewing machine museum but all I could get out of Neil was that it was near the old railway station - so we went there but that was closed on Tuesdays and we couldn't see any sign of any sewing machine museum so we are assuming it is in the old railway building which is closed! 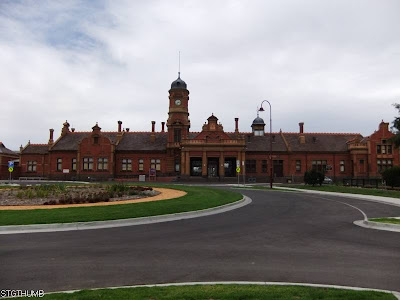 it is a lovely old railway building and the surrounding area is really well looked after - they were getting things ready for some sort of opening - we think it might be a new building near this railway station as the entire parkland area looked brand new! 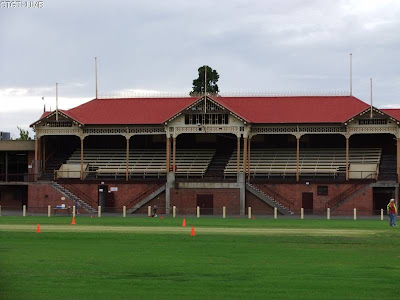 just near the caravan park was a footy field and it had a nice old grandstand.
We got up this morning after a warm night. The day was very cloudy so we checked the radar and there was only a few showers out and about so we decided to chance it and head for Beaufort today.
We took a quiet road that ran parallel to the main street to the road that goes to Talbot - we were going okay until we got to a sign that said the road is closed between 8.30am - 4pm ... it was 8.50am - the have barriers up as it runs between 2 school buildings - so that threw us a bit and we took a side road which didn't go where we thought it would so we got a little lost for a while and eventually found the street again. We went to the main road and stayed on there in case there were any more suprises! The road to Talbot is also one of the main roads to Ballarat so it was very busy, no shoulder, but the traffic was okay. It is up and down to Talbot with 2 biggish but easy climbs.
We got to Talbot and were very relieved to find a smaller and not so busy road to Lexton/Beaufort.
Talbot looked like a nice town with heaps of old buildings - I would have loved to have taken so photos but it was raining so I didn't want to get the camera wet. In fact it had been a light drizzle all the way from Maryborough and the spray from cars got us and Kouta all wet! Kouta was not pleased that his basket was wet!
Talbot had a caravan park in the recreation ground so we might remember that for next time. Neil and I have both found the house we would like to buy (not to sure about the location but definitely the style!) it is situated just after the turnoff to go to Lexton - it was fabulous! 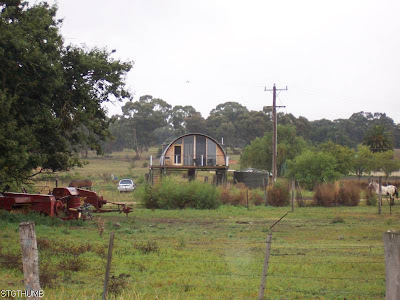 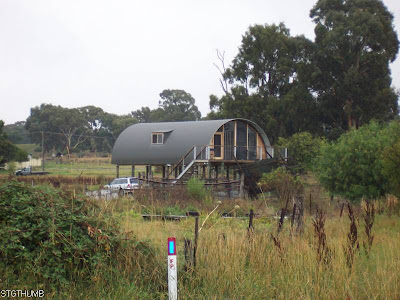 it looks really cosy!
From here Talbot it is a steady up hill climb to just before Lexton - the hill grade is very gradual but you know you are climbing. 3km before Lexton you go down into the town.
We had a cuppa here and saw our Beaufort road - we took this road with a 9km gradual up hill climb to what we guessed was the divide as on the map all the rivers either went north or south. Unfortunately there was no marker to signify the divide - we were a little over the 400m mark above sea level. We were a little disappointed that there was no sign for it as we always take a photo of the divides we cross. From here there is a tiny down hill and then flat to Beaufort.
At Waterloo which is about 10km before Beaufort we took a photo of the divide we crossed. 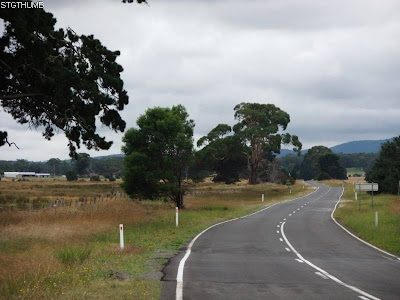 I am guess the road crossed straight up from the 2nd white road marker from the left - hence the trees are blocking the view! Coming along this road and at this spot you could see the grass that got caught on the fences from the floods - I imagine there was alot of water as the grass is still lying down and the grass on the fences is at the top of the fence. Emu Creek starts around this area of the Divide and goes all the way down to Allansford and out to sea near Warrnambool. 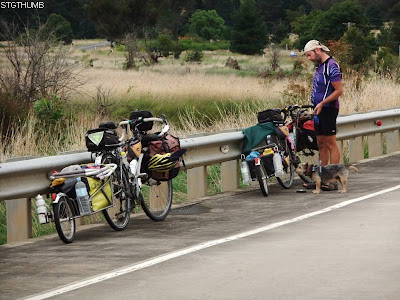 just resting a bit!
We got to Beaufort just before 2pm and came to the campground which is about 1.5km from the town center. I was going to go back and have a look at the 'egg gallery' as recommended by Ray but unfortunately it began to rain not long after we set up tent - so I think I will have to come back another day!
The campground is nice - I can't remember it - I know I have been here but nothing in the park seems familiar. It is a basic park with no kitchen facilities and I am not even sure if there bbq in the campground itself - only one in the public area as this campground is near the footy oval.
We do have a nice spot with a nice view. 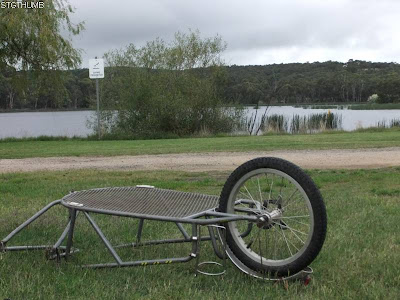 this was taken just as the light drizzle started.
One thing I have forgotten to mention is the amount of dogs that have chased us on this trip - I reckon at least every 2nd day we get chased by damn farm dogs! Today was the scariest - we had just come up a hill climb and was just going down it when I heard a bark and looked to my left and saw a farm dog take 2 bounding steps, jump over at least a 1.5m fence and start sprinting towards me! lucky I was going down hill and so had a fair bit of speed, but in saying that this dog was incredibly agile and fast that I looked and saw Neil was too far behind so I had to scream at the dog - usually I panic and squeal but this time I had to make my scream a little more aggressive, but as I said 'piss off' (not that I think it understood what piss off means!) neil also growled at it and it backed off - it must have been about 25m from me when it turned off and thought either it wasn't going to catch me and Kouta or we weren't worth it!
I tell you last year we didn't have too many chases but this trip it is so frequent and believe it or not the damn dogs always do it as you are going up a slignt incline or have a raging headwind that you struggle to pick up enough speed to out cycle them - there was one chase where I was going up a hill and when neil said to pedal faster I had to ride that hill at about 20km per hour to out cycle the dog - it nearly killed me!
Tomorrow we are off to Lismore.
Posted by Janet O'Brien at 4:39 PM