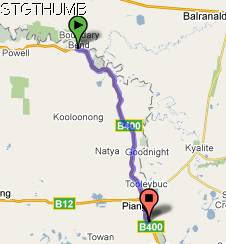 Boundary Bend to Wood Wood = 54km
Cummulative total = 1400km
Finally we had a cool night! Around sunset last night we decided to go down to the murray and have a look at it - the murray at sunset is quite stunning! 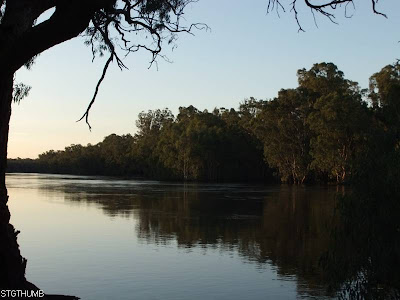 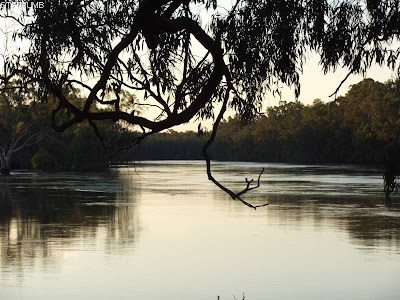 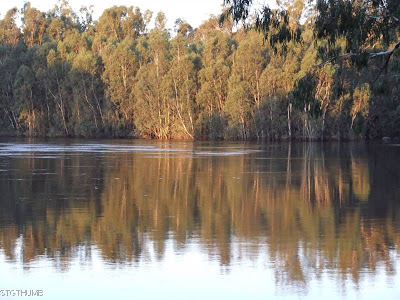 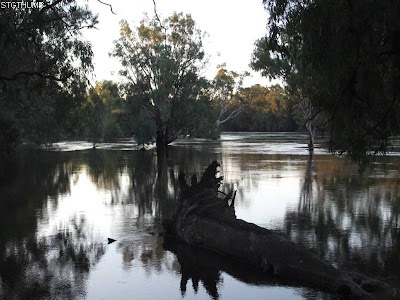 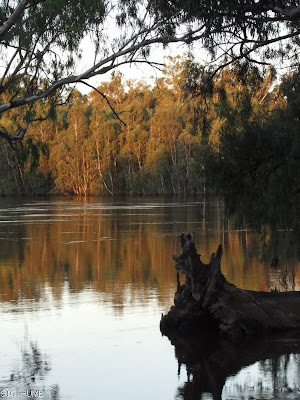 we probably should have gone about 30mins earlier but we were in the middle of a scrabble game and Neil was desperately trying to make a come back and beat me ... he failed!
It cooled down around 9pm and the wind began to blow so the temperature dropped to around 15 degrees so it was easy to go to sleep and actually stay asleep. I think all 3 of us had the best nights sleep since about a week ago.
We got up and the wind was blowing already and it was blowing from the south which meant a head wind.
So we started just after 8.30am and just plodded along. Not far from boundary bend I took this photo from the side of the road of trees that I think are almond trees 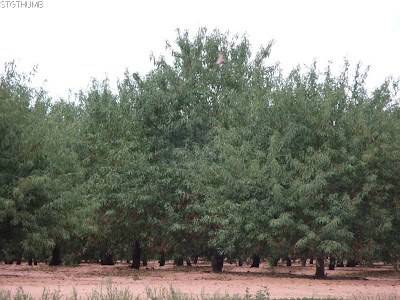 they look like the trees we saw yesterday but just down the road there was Boundary Bend Estate where the process olive trees but I am sure these are not olive trees as the leaves are green and not that grey green leaves that olive trees have
About 15km down the road there was a little rest area so we pulled over and had a quick break. In the trees were these fruit fly traps. I suppose they are checked regularly to see if they can catch a fruit fly because even if they catch 1 fruit fly it can mean that there maybe more and since this is a fruit fly exclusion zone farmers do not want to find one in this area as is has serious consequences. 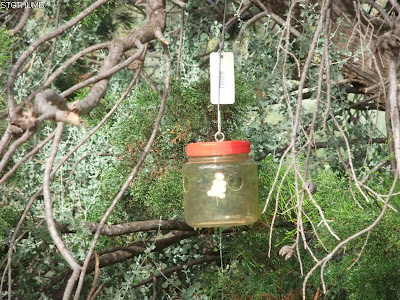 we travelled along anywhere between 11-14km per hour and I reckon the wind was stronger than what we had coming from Renmark to Mildura.
Surprisingly enough the Murray Valley highway has been really quiet but I imagine it will start to get more traffic from Swan Hill - in fact the traffic picked up at the junction with Tooleybuc - more B-double trucks and there is no shoulder for us to ride in and the drop of the road to gravel is pretty high so it is difficult to get off when 2 trucks come - so far we have been lucky and haven't had too get off.
We took a quick break at the junction with Tooleybuc and at the rest area you could see a massive pump system coming from the murray for the irrigation around the area. 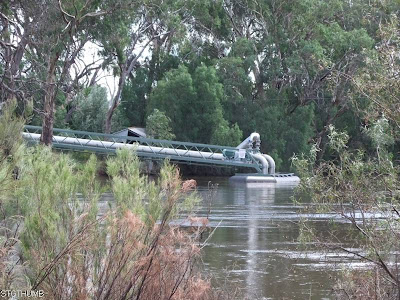 this is one is relatively small compared to the 2 we saw near Boundary Bend!
Also at the rest area you could see evidence of the levy bank that was hastely made when the murray threatened to flood. 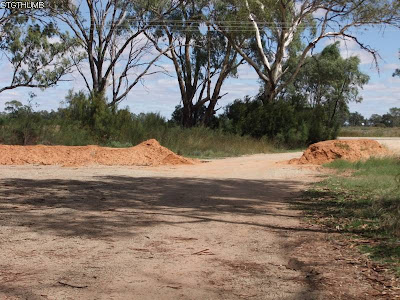 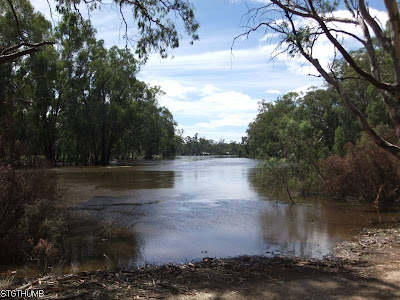 we got to Wood Wood finally and like Boundary Bend all it is is a general store, caravan park and takeaway all rolled into one!
Basically it is here for the seasonal workers which should be here now for the picking of the wine grapes but the rain and flooding has damaged the grapes so they are waiting for them to dry out etc.
This caravan park is costing us $25 for a powered site - damn expensive for what you get - a run down, dirty shower and toilet block and the laundry has a machine that has never been used since it is covered with bugs, it smells like something is dead in there and the laundry sink is filthy - basically the park is really dirty and Neil says this is the worst park we have been in so far and by far the worst value for money. Usually it is me that says that first but Neil got in first!
Short day tomorrow to Swan Hill - if it wasn't for such a strong headwind today I think I would have tried to make Swan Hill! We will still have a headwind but it won't be as strong.
Posted by Janet O'Brien at 3:35 PM