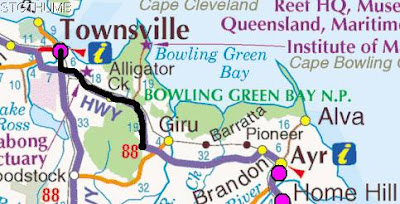 Woo hoo! we cracked the 5000km mark!
We said farewell to our pet cabin and below are photos of Koutas' enclosure. 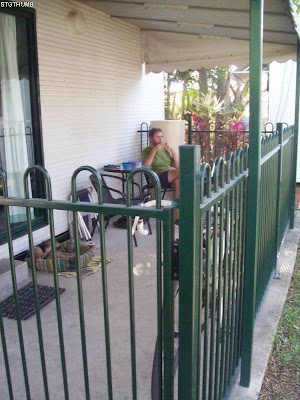 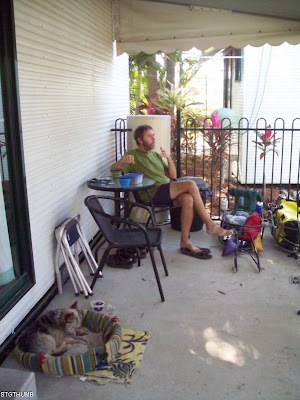 I think Kouta was glad to be rid of the place as for a while last night he kept looking into the cabin while we were watching TV and off course Neil is immune to Koutas' pleading eyes whereas I am not and said to Neil that we won't stay in cabins again as it hurts my conscience to see Kouta looking in with pleading eyes at me!
On to todays ride - the morning traffic was exceptionally busy I suppose because it was peak hour traffic and Townsville has alot of roundabouts at major intersections in which we are just too slow for so we had to just go down a bit and use the refuge islands while crossing!
Otherwise the roads were good - they have bike paths on all the major roads and once at the Bruce highway it was plain sailing as the shoulder was very wide for us. We even passed the army barracks and the road is good until Alligator creek except for going over the first small range at around the 20km mark the shoulder becomes very narrow and crosses a bridge and Neil and I nearly collided - he didn't here me say that I am stopping as there was a convoy coming up behind us and we had no more shoulder - I stopped turned around and could see Neil was nearly having a heart attack! so I assumed that he nearly crashed into me - he didn't hear me so I have made a rule that he is not to tail gate me and to keep a minimum of 10m behind me so that he can see in front of me and I can see behind him so if I choose to stop he has plenty of time to stop as well!
After Alligator creek the shoulder disappears for 2-3km and the road is very dangerous as the truck traffic is just phenomenal - we are hoping the trucks ease off as we get further south. They have also resealed the road and they have painted the middle lane marking but have not painted a shoulder - so the cars tend to not give us much room. We are hoping the ride tomorrow is not so harrowing as today!
The campground is an eco one about 6km north of the Giru turnoff - It is a little primative but has heaps of Kangaroos, birds and mossies!!! It does have a camp kitchen and there is a brother and sister also camping and Neil is chatting to them at the moment in the kitchen. 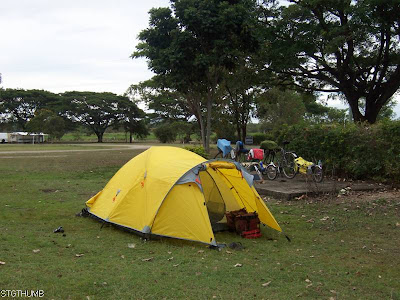 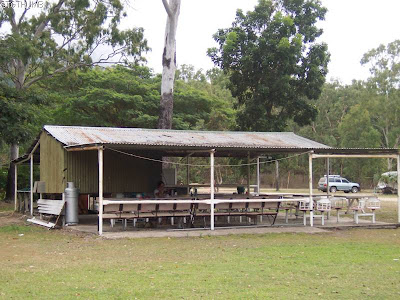 here is the camp kitchen - doesn't have hot water but has gas burners, bbq and fridge.
Tomorrow we will be at Home Hill and are not sure if we will be at the free town comfort stop or at the campground.
Posted by Janet O'Brien at 6:23 PM