Crikey today was another nightmare day on the roads, so much so that I promptly stopped on the side of the road about 5km into the ride and said to Neil that I am turning inland at Bowen and he can follow me if he wants!!! I think by the time we got to Home Hill even Neil was saying that we will be turning ... fingers crossed the road is sealed all the way! so tomorrow is a day of rearranging our route through Queensland!
We just aren't sure if the shoulders are going to be there further down the Bruce Highway - we had no shoulder for the first 10km and if we did it was very narrow and the traffic and trucks zoom past us very close at 110km per hour and today we had a very strong cross headwind (26-30km per hour) and it was coming at us from the right which is also where the traffic was so when a truck going north bound passed we stopped dead on the road, when a truck passed us going south bound (same as us) they dragged us in towards them and the air disturbance behind the truck tended to drag you in even more and then when the air disturbance finished the strong cross wind pushed you back and off the road completely!!! I was having a hell of a time trying to control the bike! to make matters worse sometimes there was no side of the road and just a sheer drop of about 1/2m ! There was even a bridge and it could only be like it in Queensland and fortunately for us there was no trucks overtaking us when we crossed the bridge - it was about 40-50m long and no shoulder on it and the sides of the bridge only came up about 20cm from the road - so any car that lost control would go right over the edge and into the river ... only in regulation free Queensland!! 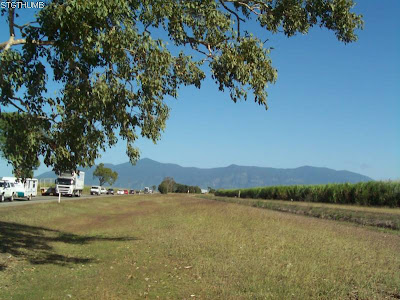 The above photo is of the traffic on the Bruce highway and the ranges in the back ground is Bowling Green National Park.
After about 10km the shoulder became very wide almost as wide as the driving lane! so that made cycling alot easier but that disappeared 15km from Ayr - I have noticed along this highway, even north of Townsville, that at least 15km either side of a regional town the shoulder disappears - it happened at Ingham, Innisfail, Babinda, Gordonvale, Ayr etc. So I am thinking that that section of the highway is looked after by the regional town shire council and so they just don't bother with a wide shoulder.
So we struggled yet again until just before Brandon where we stopped at a rest area for a badly needed cuppa and decided to take the back roads to Home Hill - basically we took the quiet road heading to a place called Clare but diverted off when closer to Home Hill ... and off course once on the road the signage was non existent so we really had no idea if we were on the right road or not! It was a rabbit warren of roads that pass cane field after cane field so it was very easy to become disorientated! but it was pleasant cycling despite being lost as there was no traffic! We had to ask for directions and one cane farmer gave us excellent directions and told us to head towards the smoking chimney which has something to do with the sugar cane crushing plant? 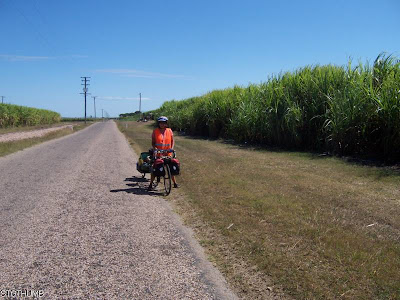 Here I am on the quiet cane field roads at this point we weren't lost and knew where we were! 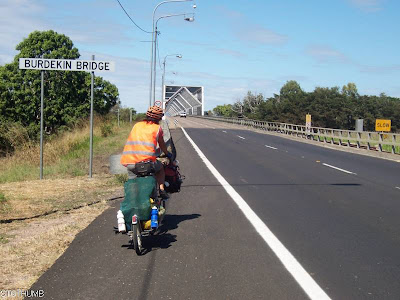 Once on the Bruce Highway again for the final 5km we had to cross the Burdekin River and the bridge is for traffic and trains hence why it is such an imposing structure. Now that was difficult going across - we thought there was a pedestrian path so we went on it and then it stopped and went down a flight of stairs and continued along below the traffic line - when we looked down the stairs we could see a guy in the middle of the pedestrian path holding some ropes and hose so we assumed we couldn't go through so we waited for traffic to go through and went back on the road in which we ended up holding up traffic as they couldn't overtake because of traffic coming the opposite way but fortunate for us there was a sign before the bridge saying that trucks and buses must decrease their speed to 50km per hour while crossing the bridge so it didn't matter if the traffic got stuck behind us as everyone was going slow anyway!
You know I am really disliking Queensland at the moment ... I think it is such dangerous and awful cycling at the moment that I would do anything to go inland at the moment! So hopefully only another 100km of the Bruce Highway and then we can head inland.
We got to Home Hill and came to the small council campground and got the last site available -it is a powered site at $22 so that actually is quite a good price. Home Hill does have a comfort stop where you can stay for free which is in the middle of town and has a flash toilet and shower block with an electric bbq and sink and tables with power points but they don't allow tents only vehicles. So we couldn't stay there. Being at the council park we get into the local swimming pool free and that is next door to the campground.
Homehill is a small town around 3000 people but it is nice and I decided to get a badly needed hair cut and I have sort off gone back to really short hair again - basically it is a 'wash and wear' style and I am happy with it, although I did say to Neil lets count how many times I get called 'mate', 'guy' 'boy' etc while we are cycling!!! 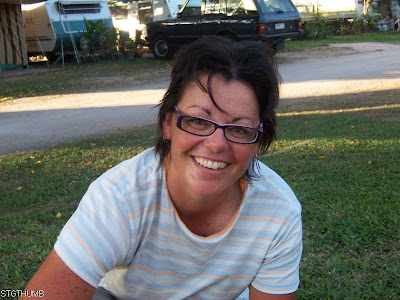 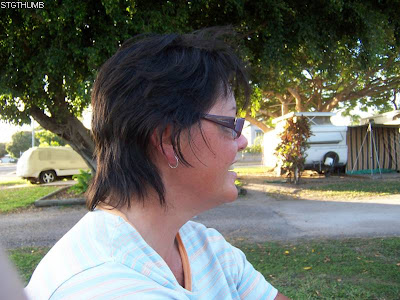 I heard you say "eeeeeww" mum!!! You never like any hair cut I get! It will do and remember most of the day it is under a helmet!
It is quite late now around 7pm and the cane field growers have started to burn their sugar cane (i am not sure why) and it makes the sunset spectacular and right now you can see the red glow in the night sky and there is a field about 300m behind us and you can hear the crackle of the fire!
We are here tomorrow to try and sort out a new and safer route to get through Queensland.
Posted by Janet O'Brien at 6:22 PM