I didn't think I would be doing the blog tonight but we are here in Middlemount and they have a caravan park ... just!
We rose nice and early this morning and it was very foggy but it was incredibly warm over night and in the morning. The fog didn't clear until around 8.30am and even then it was still a cloudy day for a while but by 10am it was nothing but clear blue skies with a northerly wind - so it was a very hot day cycling today and poor Kouta he is struggling with the heat at the moment - I would say it got to 30 degrees while we were cycling along and right now in the early evening it is still very very warm. (better than the cold thou!!!).
The first 20km this morning was relatively easy and the legs felt a little heavy but the one day break did them good. Just out of Dysart we found $3.60 in coins alongside the road so that was a bonus!!! After Norwich Parks Mine the terrain became a little more hilly until the turnoff to either Middlemount or Tieri. We went left to Middlemount and up to that point we had a tailwind but once we turned left we had a headwind.
Just before getting to Middlemount we were looking for places to camp and before we turned off we found heaps of suitable places but the closer we got to Middlemount the less opportunities there were. We passed the Rodeo ground and thought that would be ideal and so we continued on for another 2km to reach Middlemount and we saw they had a caravan park so we went along and it is a Mac Village which is a miners accomodation park but originally it was a caravan park and they still have that part - so it costs $22 to camp regardless and that includes power and believe it or not the washing machines and dryer are FREE!!! so we washed absolutely everything!
Below is our site - not really a site but one of the only spots that has good shade but the people alongside us are not there so that is okay. 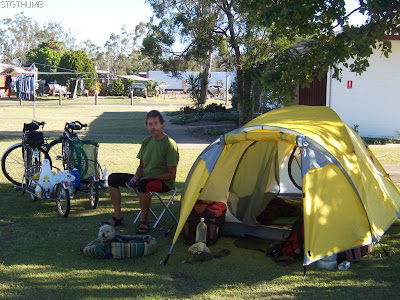 The park has 300 dongas for the miners and are building another 300. (the trucks carrying these are always passing us along the way!). Each donga is like a studio with a room, toilet and shower and costs the miners $110 per week (the rest is subsidised by the mines) and that $110 includes all daily meals and morning and afternoon tea - great aye! In this town of Middlemount there are 4 off these little villages but this is the only one with a caravan park ... which I don't think will be here for very long. I was most surprised that it has tourist sites and there are a few here - some are permanent and some just come for a holiday!
Not much to Middlemount but it does have an IGA supermarket, PO, butcher, chemist, clothes shop, newsagent, hairdresser etc.
Tomorrow we head along the Fitzory Development road to Dingo and it will take us 2 days to get there - I hope it is still a northerly tomorrow!!!
Posted by Janet O'Brien at 4:12 PM