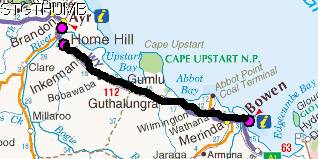 Normally when you cycle from Bowen to Home Hill you do it in one day as there is ALWAYS a tailwind but since we have got a headwind we did it in 2 days!!!
We left Home Hill on Sunday hoping that the traffic (especially the truck traffic) wouldn't be so heavy and lucky for us it wasn't. Home Hill was a nice little place and the campground was small and nice. About 150m behind the campground was a sugar cane field and each night you could see the smoke from where they burnt the fields well on Saturday night they burnt the one not far behind the campground and you could hear the roar of the crackle and heaps of black bits floated in the air and the ground and tent were covered in them in the morning. We didn't do much on the rest day but Neil did brave the cool wind and went for a dip in the local swimming pool. For dinner we decided that we are sick of bbq and roast chicken so for a change we got a 2 litre tub of chocolate icecream and had that instead for tea ... and boy did I have a bad case of wind later on that night ... I thought Neil was going to leave me!!! Now I know that too much Icrecream gives me wind!!! A lady in the caravan opposite us gave us a red capsicum - I think she works as a picker and so had some left over and thought we would like one so that was nice.

Home Hill to Guthalungra -
On to the ride on Sunday - like I said the traffic was relatively quiet today and we had a shoulder and a pretty good one but unfortunately we had strong head winds and so the going was very slow. We stopped frequently. At our first rest stop there was a grey plastic shopping bag hanging where a bin would be and Neil being the nosey parker had a look and found there was 6 large potatoes in it so we took them and will have them for dinner at Bowen! Gosh people love leaving us stuff along the way! 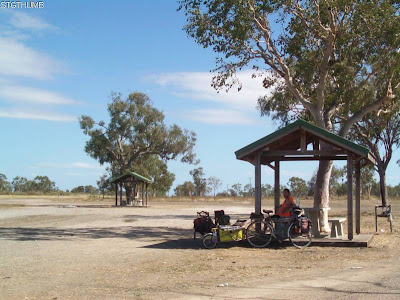 We met a French cyclist going to Home Hill to pick up his weekly shopping (as he was working on a farm at Gumlu) so his round trip to get food shopping is a 90km cycle!!!
We did stop at Gumlu only because there was free tea and coffee at the fruit stall - we did pick up bananas and tomatoes and no one was helping themselves to tea and coffee but we did! 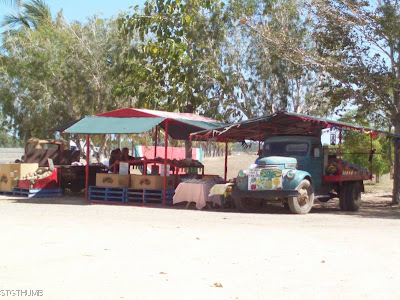 This is the fruit stall and when we turned up it was crowded but within 15mins there was no one around! To the right of it was a field of mango trees and cattle were roaming around it and every now and then they would throw a rock melon to the cattle and there would be this almighty charge for this 1 rock melon and survival of the fittest it was - it was funny watching the lucky cattle that go it as the melon was just a bit to big for its mouth and had to coax it down almost whole!
We got to Guthalungra rest area and it is very basic with the toilets being at the local gas station next to it but the toilets stayed open all night so that was lucky! Another cyclist travelling north turned up after us and he was attacked by a bird and fell of his bike and has grazed his arm and his wrist is a little swollen and sore. 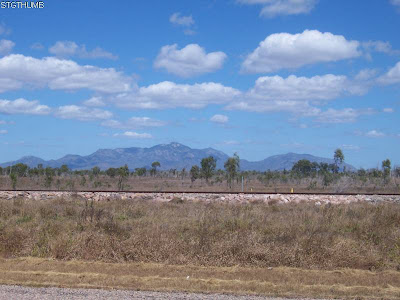 The scenery along the Bruce highway is not too bad - there are quite a few mountains or hills popping up every now and then and unfortunately I don't know the name of the range that is in the above photo but it was impressive to look at from the highway! 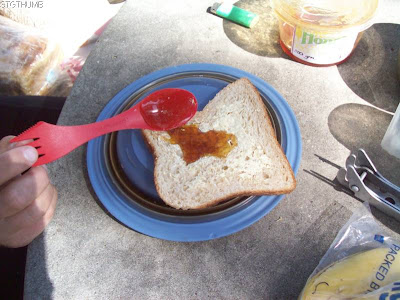 Neil bought some honey at the Gumlu fruit stall - it was quite cheap $3 for 500g and it is very dark and almost like molasses - I had a try but it is too tart for me!
Like I said earlier the shoulder along the highway wasn't too bad - most of the time it was wide enough for us but they don't look after it - sometimes grass is encroaching on it and so that narrows it for us or like the photo below they sometimes have huge cracks in them and have not filled them in properly. 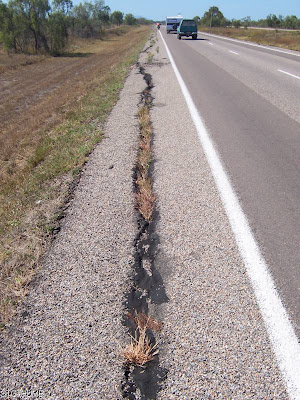 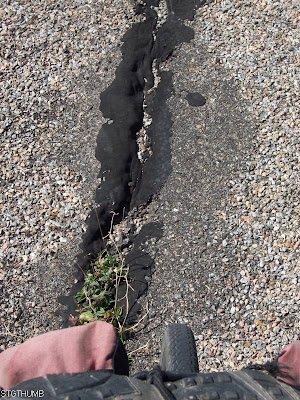 You had to be careful that you didn't go into one of these cracks as they would have buckled our wheels completely!
Guthalungra to Bowen -
We woke nice and early to try and get some km's in before the wind picked up but alas the wind was up before us and I had yet another flat front tyre! so we mended that and was happy to be away by 8am.
Again it was an even stronger headwind than yesterday and the shoulder was just as wide as yesterday. Since it is Monday today we wondered how the truck traffic would be and the trucks hit us at 11am (these trucks come from Townsville) - for the first 30km we had 20 trucks pass us, in the final 15km alone we had another 20 trucks pass us in only half the distance! And unfortunately in the last 15km true to form 15km out from Bowen the shoulder almost disappeared and just when the bulk of the trucks were passing us!
We pulled up alongside the road in some driveway and had a cuppa - I think Neil and I are a novelty to some drivers as we sit there on our chairs like we are sunning ourselves drinking our cuppas!!! Most will turn and stare at us ... but what got Neils attention was the gate behind us - the use of expensive padlocks as chain links! 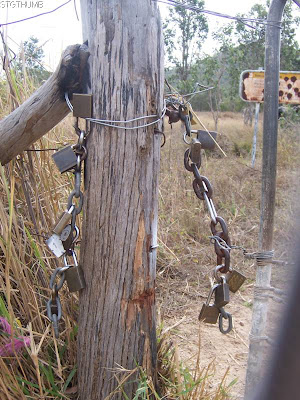 I had to listen to Neil go on and on about just how expensive the use of these padlocks are compared to buying a chain ring!!!
When we got to Melinda just out from Bowen we started to encounter the vegetable fields - in particular tomato and capsicum fields. I think they have finished the capsicum picking and as we passed we saw some tomato picking happening and stopped to take a photo of how they pick the round tomatoes. 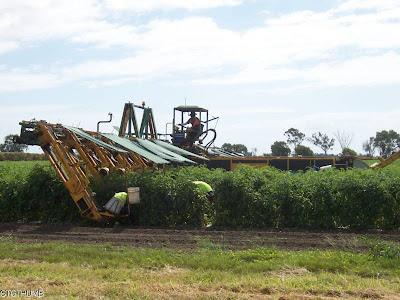 They use a machine that slowly crawls along for the round tomatoes and a few fields over they were doing back breaking picking of roma tomatoes (I am assuming they are roma as the plants were like small bushes and not like the round tomato where they grow on sort of trees) where they just pick into 20 litre buckets and lift them up onto the ute when finished - ah almost as bad as strawberry picking! ... and no I am not going out in them there fields!
We turned off to Bowen to pick up food for tonight for our potatoes - baked potatoes and mince!!!
We are at the Top Tourist park and it is okay - I had trouble with the shower - I can't stand it when you go to a shower and there are all these complicated instructions on how to get hot water. I went to the new communal ensuite ones as they are closest to the camping area and I got all confused and had to keep reading the instructions and I saw that it was timed but it didn't say how long and by the time I got into the shower I think half my time was passed and I was right as 1 shaven leg and my hair all full of suds later the hot water cut out ... so I continued with just cold only and then I noticed the water going brown so I turned it off and had to rinse out in the sink!!! I was cursing and I found out later there is a note to say that Bowen over the pass few days sometimes have had water the colour of black coffee and that is due to the corrosive water pipes from Bowen Water so there is nothing the campground can do so we have to be careful when getting drinking water!
Did I mention that I am beginning to dislike Queensland? LOL!!!
Posted by Janet O'Brien at 3:37 PM