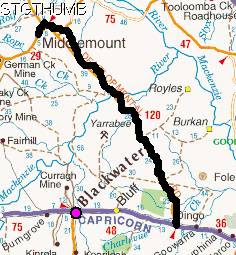 We woke on Friday morning to a very thick fog but the night and the morning were very warm so it seemed strange to have a fog. We had only 8km to do before we hit the Fitzroy Development road and then we turned south to Dingo. 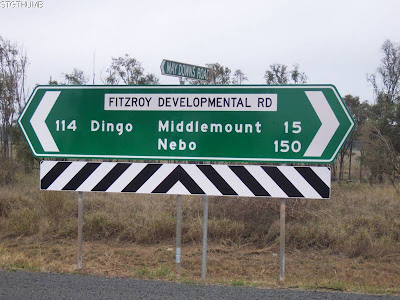 It wasn't a bad road a bit like the other mine roads (although there are no where near the amount of mines along this road like on the previous roads) and was flattish with a few hills here and there. For the first 40km we had no wind to speak off and then after our cuppa at 40km we had rain for around 50mins and it was only a light drizzle but enough to wet the road. Right behind that rain band was some shocking winds - I tell you we dropped to 10km per hour and even then that was a struggle! I would have to say the wind was around the 25 - 30 kph mark - it was ridiculously strong and coming straight at us.
It is often a dilemma (spelling?) as to what to do when this happens - do you stop and step up camp leaving a longer day the next day and if you do what happens if the wind speed is still blowing? ... or do you continue to push on and do what you said you would do and then hope like hell tomorrow is not as strong as today?!!! Well we were in the dilemma and at 58km (we needed to go 65km to make it the half way point for tomorrow) and there was an ideal camp spot and it was tempting but I thought that would leave 73km for today and if the wind still blew I knew I would struggle ... so we passed on it and continued for another 12km which took us over an hour to do and found a little track leading of the road to a sort of area that had been cleared alongside a fence line so we set up tent there.
Actually it was quite hard finding a bush camp as for the majority of this road they have burnt both sides of the road to create a fire break. 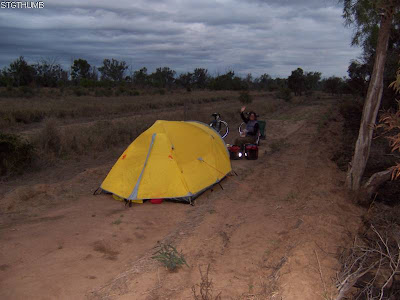 It was a nice campspot and made it an early night so we could listen to the football (geelong vs. carlton) and we managed to get quite good reception but alas we could only make it to half time before we both fell asleep!
We decided to set the alarm 30mins earlier this morning and rose at 5.30am thinking that we could get some km's in before the wind picked up but funny enough as we rose, the sun rose and so did the wind! It wasn't as bad as yesterday but it was blowing!
We managed to start at 7.30 and by 8.15am the wind was about as strong as yesterday! Fortunately we had also shed about 5kg of water each since yesterday so we managed to cruise along at 13kph which is a bit more respectable than 10kph!
There wasn't much traffic this morning but anyone that did pass we were sure they were going to vote somewhere! What did pass us was a wide load with a police escort which meant that everyone had to get off the road ... 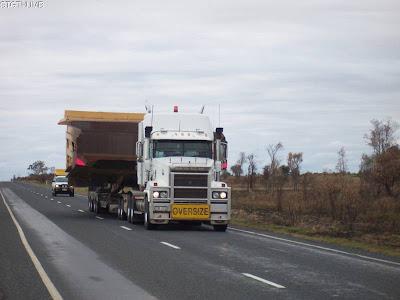 This truck was carrying a 'scoop' which attaches to a coal bulldozer type vehicle and like I said to Neil lucky the truck has a tail wind as if it was going the same way as us the size of the scoop and the fact that it would be facing into the wind would mean that the truck would probably be going as slow as us!!!
A further 10km up the road we came across another police escorted wide load and this time it was the rest of the bulldozer! 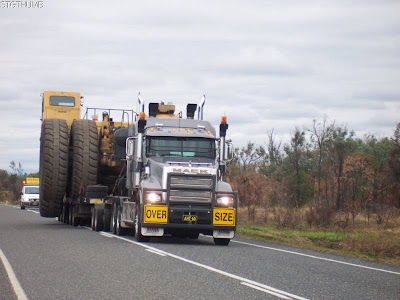 if you look closely the wheels from the mining dozer is only about 75cm from the ground! which is not far when you consider just how big everything is.
Well this is probably our last encounter with the mining industry for a while and I am sure glad we diverted to this way, as hard as it was, I think it was a better option than going along the Bruce highway!
Tomorrow I think we will have a short day to Duaringa - it is Sunday tomorrow and there will be no shops open so we will have to get out food from a servo station - there is very little here in Dingo and so we had to go to the servo to pick up some food - 2 loaves of bread and 12 eggs cost us $12.30! But at least it is only $20 to camp regardless if you ahve a tent or van - so we are hooked up to the power!
Posted by Janet O'Brien at 2:56 PM