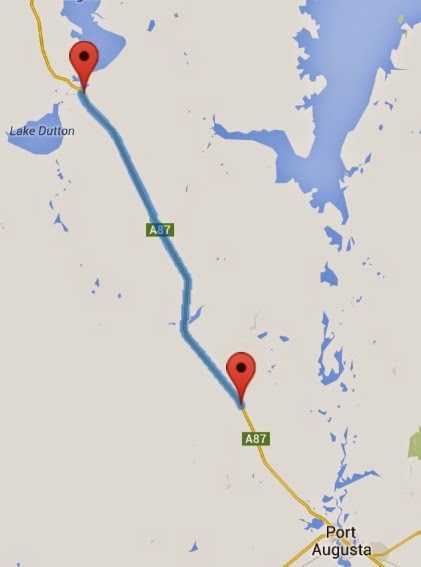 It was a good days ride today and again the wind was very light, almost not there!  We were on the road at 8am along with the trucks ... the cars don't start until later.  As we are getting closer and closer to Port August (civilisation) the traffic is getting heavier ... I forgot to mention in the last post that since Woomera we have had a shoulder ... that is so poorly made that you can't cycle in it ... lets just say that it is smoother to ride on the rumble strips that are painted on the white line to keep drowsy drivers from veering of the road!  The trucks don't mind us cycling on the road (as we tend to go into the shoulder when they have oncoming traffic when they overtake us) but I think some of the other traffic don't like it and they tend to pass very close to us ... in fact South Australians are terrible drivers - they really love to squeeze alongside of us even when an oncoming car is level with us ... this happens quite alot since being in South Australia ... in fact it happens every time we are in this state!
Here is what we got to look at for most of the day ... 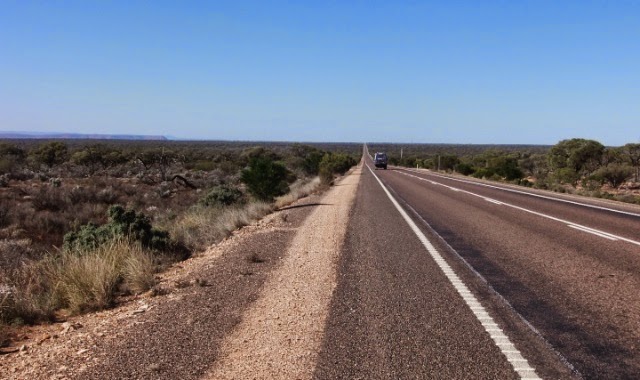 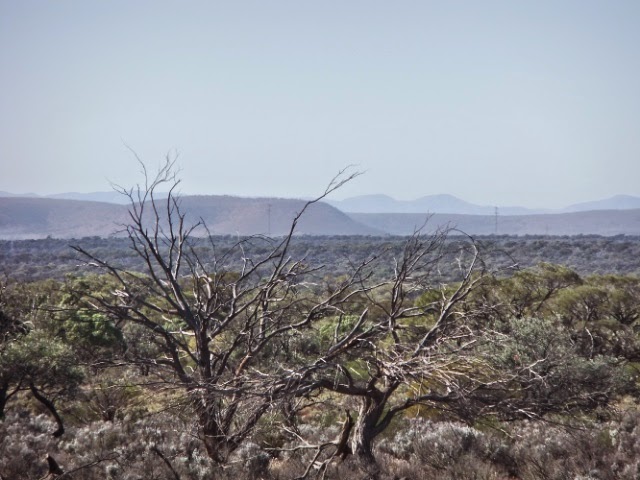 At the rest area we had a cuppa and then we decided to wash Kouta ... as the rest area has a water tank.  Kouta did not like this wash as the water was straight out of the tank and very cold ... he kept wanting to run away!  Now before all of you start going "oh poor kouta fancy washing him in cold water" we also have our own bushcamp washes with cold water - the only time we have boiled the water was when we had the cold weather before Coober Pedy!
At lunchtime we decided to bushcamp at 70km leaving us 32km to Port Augusta tomorrow ... we could have made Port Augusta tonight but what is the point of getting there today and having to pay $27 dollars - best to get there early tomorrow and make the most of the day!  Besides we are in no hurry!  Our bushcamp tonight is about 40m from the road ... and Neil has been thinking about what we are going to have for dinner tomorrow already ... he is dreaming of Sausage rolls or pastry ... yeah right Jonesy ya dreaming!  Not sure if the campground has an oven ... if it does then he may just get his sausages rolls!
Posted by Janet O'Brien at 4:29 PM